Thor Questions AKA "I Was Wondering" #2

Thinking about the latest twists in the Thor saga, I thought about the Silver Age Thor so I was wondering--

...Was there once a " fandom truism " that Marvel titles that were NOT written by Stan " didn't really count " as Marvel stories , in Marvel's early years ?

I saw the concept referred to in one of Fred Hembeck's vintage cartoons .

When I looked at the credits on Essential Thor Volume1, it becomes apparent that it was not considered as a top tier "Marvel" book. Stan only plotted it from its beginning with Larry Lieber writing #83-91 and Robert Bernstien #92-96. With #97, Lee takes over scripting the series.

Yep, that would have been Cobra and Hyde who grabbed it with some mechanical device.

Thor bolted into the crowd at the department store, and then transformed back to Don Blake in the confusion.

Then, he came forward and asked for his walking stick in exchange for helping turn Thor in. The Cobra slithered in to get the wood stick, but stopped short. Mr. Hyde destroyed the machine getting to it.  I think Don Blake   transforms to Thor when the cane is struck, returning to the fight.  Jane Foster is outraged that Don would turn Thor in. (Don't recall the issue number, but there are a limited number of these appearances by Hyde and Cobra, so it's in the 100s... (or else #110-111 which is a two-parter where Odin or Balder stops time to allow Thor time to beat the foes and then a miracle cure arrives from Asgard just in time.)

I could swear I remember a comic where a baddy shifted it with a hydraulic lift of some sort.

If I recall correctly, this has been asked before...by me, and I looked it up through Essentials or Masterworks, and it happens suddenly about issue #105... but don't quote me on that. I'm not sure if it's noted in the GCBD or not, but it was an afterthought by Lee and his idea to graff Ol'd Elizabethan English onto the Norse God's speech.  IMHO, it works.

What issue of JIM did Thor start using "thou" and "thee"? Was it a gradual process or did it happen between issues?

I have a few questions as well, regarding Thor's creators and innovations.

First, I've looked for a notation in the GCD for when the elizabethan English starts in Thor's speech, but find nothing noted. I'll check again tonight when I'm home from work.

Second, When did Chic Stone start inking Journey into Mystery's Thor strip on a regular basis?  Was it issue #103?  I'm pretty sure that #101-102 is George Ruesoe or George Bell.

Third, Any idea why the first Thor essential volume ends with#112, the battle royal with Hulk? It would have been better if it had stopped with #111, in my view, as the end of the two parter with Cobra and Hyde. I just get the impression that Thor shifted gears into more continued story arc after that one-shot #112, which I always thought was the start of the modern day Thor stories, instead of the unwanted step-child era.

I also feel the first cross-over with Magneto in about #109is the introduction of other Silver Age Marvel heroes (X-men) into the continuing story-line of Thor.  Prior to that, I don't recall any/many direct earth/Marvel superhero connections.

Permalink Reply by the_original_b_dog on May 28, 2012 at 9:22pm
I'd have to look those up, too, but I associate Vince Colletta as the regular inker on Thor, not Stone.

Permalink Reply by the_original_b_dog on May 28, 2012 at 10:26pm
I started rereading Thor from the beginning tonight. I'm almost up to JIM 90. But I also feel they are so making this up as they go along, or else, as I hinted upthread, various creators are pulling this book in vastly different directions. I kinda wish I could see the early letter cols, to see if they shed any light.

You CAN see the early letters columns, as they are reprinted in the entirely in each Omnibus volume.  So, rush out and buy the first Thor Omnibus for $99 if you really want to see all the stories, and read the printed words.  I know it was worth it for me on the FF, Avengers and X-men omnibus. 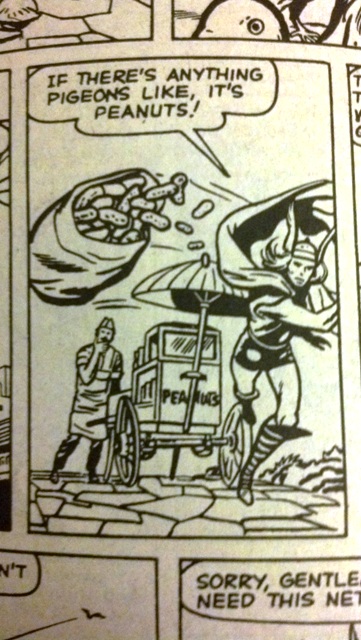 I turned in last night and then woke at 3 a.m. realizing I had not done my Thor research...

So I got up, and went to the vault, swung the large door with the time-lock open, and then dug out my Marvel Masterworks volume with Journey Into Mystery #101-110. (Why they stopped in the middle of a two parter puzzles me.  In Daredevil, the extended one more to include all of Wally Wood's work!)

Anyway, I confirmed that Chic Stone started in #103--- and that his work continues beyond #112 with the Hulk battle.  Now, I know that Vince Colleta (most identified with the series) starts someplace in the next half year or so, but I just don't recall where. Perhaps it is the Trial of the Gods...  More research is needed.

And, although I skimmed and found a few odd word expressions from Thor as he was fighting off Cobra and Hyde, there's no obvious shift to "Elizabethian Speak" prior to #109 with Magneto showing up.  For some reason, I associate the Chic Stone inks with the "elizabethian English Speak", but I KNOW that I've looked for this shift before.  I suspect it's referenced in a letters page as well, as the readers noticed it.

I was too tired to do any more, so I closed the vault, turned on the security system, released the dogs, and made sure the armed guards were all in position before I fell into bed.  Whew, this research is exhausting!

PS: I recall someone asking why Larry Lieber was included in the credits of the Thor movie.

While Larry may have been following the lead of ol' cousin Stan, I have read that it was his specific contribution that the hammer be made of some magical property...an Uru mallet, if you will.  Stan asked "What's that?"  And Larry told him that he just made it up out of thin air.

THAT, could be enough of a providence for him to received creator credit in the movie!

Oh, I'm pretty sure you're right, B Dog...  Please keep an eye open for the first "Thou spaketh thusly" to creep into Thor's verbage.  I'm betting it's about #109, myself...  You're about 20 issues or a year and a half away from there right now...

I started rereading Thor from the beginning tonight. I'm almost up to JIM 90. But I also feel they are so making this up as they go along, or else, as I hinted upthread, various creators are pulling this book in vastly different directions. I kinda wish I could see the early letter cols, to see if they shed any light.

Jeff of Earth-J replied to The Baron's discussion Movies I Have Seen Lately
"Nor these:"
7 hours ago

Jeff of Earth-J replied to Jeff of Earth-J's discussion Swamp Thing
""He also says he’s been there before, hinting that he was reincarnated." Alec does…"
7 hours ago

Jeff of Earth-J replied to Jeff of Earth-J's discussion Swamp Thing
""Who was later known as Louise 'Weezie' Simonson." Artists frequently use…"
7 hours ago

Richard Willis replied to The Baron's discussion Movies I Have Seen Lately
"Not these guys?"
7 hours ago

Richard Willis replied to Jeff of Earth-J's discussion Swamp Thing
"ANNUAL #2: Swamp Thing uses his newly discovered abilities to go "Down Amongst the Dead…"
8 hours ago

Richard Willis replied to ClarkKent_DC's discussion The New Season (2021)
"ClarkKent_DC said: The rampant housecleaning at The CW makes me wonder what's going to be left…"
10 hours ago

Jeff of Earth-J replied to The Baron's discussion Movies I Have Seen Lately
"THE THREE MUSKETEERS: I first saw this 1973 film with its 1974 sequel in 1975 as a double feature…"
10 hours ago