Oct. 22, 2020 — If you caught the first season of Helstrom when it dropped on Hulu on Oct. 16, you may be wondering if it’s a Marvel TV show or not. The answer is yes, but at such a remove that you can be forgiven for asking.

For one thing, there is only one minor reference to Marvel’s other screen efforts in the entire 10-episode season. “Helstrom” even forgoes the usual opening Marvel credit scene (of pages flipping by). The only direct Marvel reference is the appearance of a Roxxon gas station; Roxxon is Marvel’s ubiquitous evil energy corporation that has made the leap from Marvel Comics to screens large and small.

If you squint there’s one more reference, the character Caretaker (Robert Wisdom). That’s  a name and character usually associated with Ghost Rider — who isn’t mentioned in Helstrom. Sam Elliott played Caretaker in the movie Ghost Rider (2007), and the character’s function, but not name, also appeared in the form of Moreau (Idris Elba) in Ghost Rider: Spirit of Vengeance (2011).

The reason for this is that Helstrom wasn’t planned as a standalone venture. It was initially part of a projected spooky subsection of TV shows named “Adventure into Fear,” with an announced Ghost Rider show, and hints of other horror shows to come.

Mind you, the new show wouldn't have starred the Ghost Rider of the movies, Johnny Blaze (Nicolas Cage. More likely it would have been the one from TV's Agents of S.H.I.E.L.D., Robbie Reyes (played by Gabriel Luna), or a third one altogether.

But that plan was scuttled when Marvel Studios absorbed, and dissolved, Marvel Television. Ghost Rider and whatever other shows Marvel TV had planned were all spiked. The almost-completed Helstrom was left as a vestigial tail.

"We are not tied to the MCU,” Helstrom creator and showrunner Paul Zbyszewki told the YouTube show “Fanboy Factor.” “We are our own separate thing."

But make no mistake, Daimon Helstrom arises from Marvel Comics, where the character has a long, rich and really weird history. The TV show lifts elements from all of the character’s iterations, even the silly ones. Ana Helstrom (Sydney Lemmon) is the sister of Daimon (Tom Austen), is the best part of Helstrom. Her tongue and clothes are always sharp. (Photo by: Katie Yu/Hulu)

Helstrom’s story begins, more or less, in 1954. That was when Comics Code Authority of America came into being, instituting a draconian Comics Code that outlawed, essentially, anything interesting. Among the many interesting things that comics could no longer do was horror, or anything horror-adjacent.

But even the almighty Code couldn’t resist modernity forever, and in 1971 it went through a series of revisions. Among those revisions was allowing monsters, so long as they were “handled in the classic tradition.” What that meant was that vampires were OK, as long as they more or less resembled Bram Stoker’s Dracula. Werewolves, Frankenstein’s monster and other assorted things that go bump in the night were fair game, as long as they also appeared in “classic” literature. By contrast, zombies — not having a famous book to use as cover — were still outlawed.

Comics publishers feasted on these newly opened options, and no publisher more so than Marvel Comics.  Man-Thing and Morbius, the Living Vampire, launched in 1971. Ghost Rider, Werewolf by Night and Tomb of Dracula followed in ’72. The next year gave us Monster of Frankenstein, N’Kantu the Living Mummy and, finally, Daimon Hellstrom, the Son of Satan.

Yes, Hellstrom with two L’s, not one like in TV’s Helstrom. And his succubus sister was named Satana, not Ana. And where the TV show was coy about who, exactly, Daimon and Ana’s father is, the comics proudly named the feature “Son of Satan.” Subtle, it was not.

Nor was Daimon himself. On TV he’s an ethics professor, but in the comics he was a divinity school student who makes a terrible discovery about his heritage when he comes of age. In his full Son of Satan mode, Daimon was bare-chested (to show off his pentagram birthmark), wore a flowing red cape with a golden lining, gold boots, and form-fitting red leggings. Even for the ‘70s this was a pretty flamboyant superhero outfit, making Daimon look like the forgotten sixth member of the Village People. 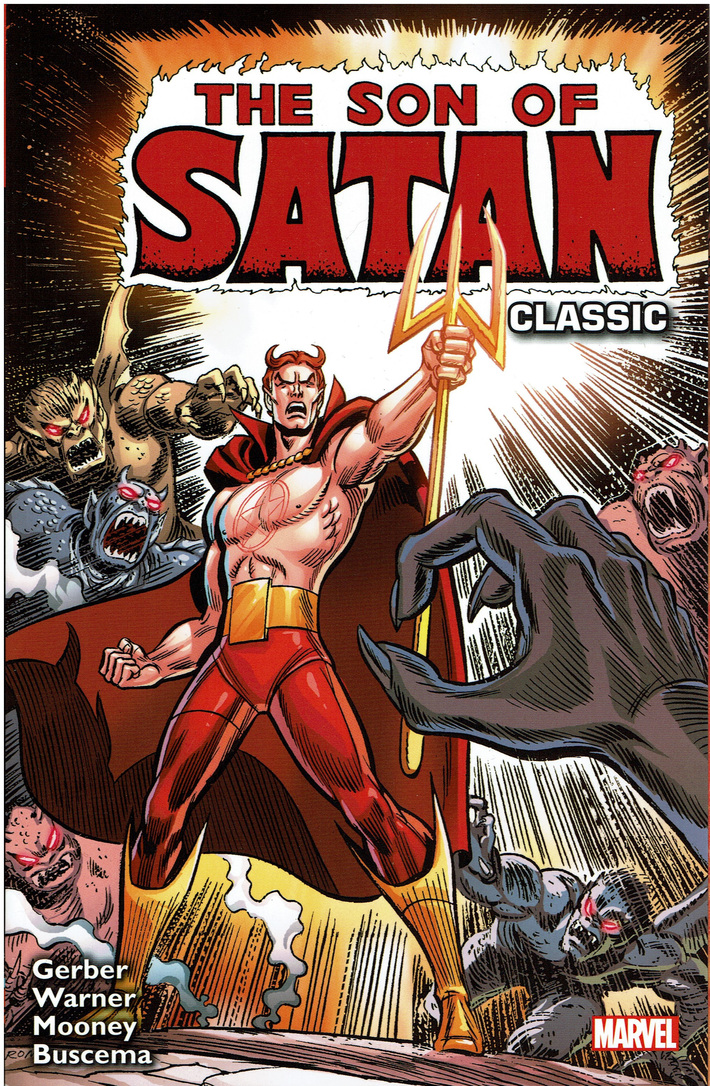 Marvel was undoubtedly going for a superhero vibe with Daimon Helstrom's original outfit, but it came across as more Greenwich Village than Avengers Mansion. (Art by John Romita Sr., copyright Marvel Comics)

And “superhero” is a pretty good term to roll with. While there was a lot of biblical talk, Daimon fought demons that were pretty substantial, battling them with fists and fire. His arch-enemy was, of course, his own father, who was always aflame. He looked like the Human Torch with horns.

Which is probably how Marvel escaped condemnation from the Bluehaired Mothers of America for a series named “Son of Satan.” Satan wasn’t THE Satan, you see, so much as he was a character in a comic book who talked like a supervillain. And like any all-powerful comics character, he had his own kryptonite, which we learn about from Daimon’s own mouth.

“Have you forgotten that I possess the sacred trident,” Hellstrom says to Dad, “made of Netharanium, the one substance which can sap you of your powers?”

This version of SoS went through a number of changes as writers tried to make this goofy concept work. But even so, some of this version made it to the TV show, like Daimon’s birthmark. (Which may or may not be a pentagram on the show; it’s hard to tell even with the pause button.)

Also, both early comics and TV show share the idea that Daimon has two natures, always at war with each other. “I am a man dominated by two characters!” Daimon monologues in his first appearance. “In the daylight hours — I am the puny, religious weakling Daimon Hellstrom, sworn enemy of my father! But by night, my true and rightful heritage takes control — and I become my father’s son!”

Not really, as Daimon is pretty much always a good guy. But the TV Daimon says much the same thing toward the end of the first season. Only he’s a bit more subdued, and is wearing a shirt.

The shirtless Daimon had a short-run series and then became a stalwart of Marvel superhero team The Defenders for a few years. He talked tough, but honestly, he was just another superhero. He even romanced and eventually married teammate Patsy Walker, a character who spent the 1940s and ‘50s in Marvel’s romance books and became the superhero Hellcat in 1976.

Eventually, though, the Code relaxed enough for the strip to be less neutered. In fact, Daimon became something of a murderous, cynical anti-hero in a 1993 book titled Hellstorm: Prince of Lies. Son of Satan was pretty hokey until a 1993 makeover series titled Hellstorm made it kinda scary. The Hulu TV series lifts a little from both eras. (Art by Brian Bolland, copyright Marvel Comics)

Daimon went through a lot of changes in this book, especially when writer Warren Ellis took over with issue #12. The first issue established that the Daimon that we’d been reading about was an imposter. (I think that idea’s been abandoned.) And Patsy was killed off. (She got better.) For a while Gabriel the Devil Hunter became a supporting character, who transformed into Gabriela the Nun Initiate on TV.

One other step was to bring the book in line with Marvel’s overarching cosmology, wherein there really isn’t a Satan, so much as a plethora of evil lords of other dimensions who like to call themselves rulers of hell. Daimon’s father was just one of those, whose real name is Marduk Kurios. (Not sure if this stuck, either.)

The TV show lifts the tone and muted colors of this book, plus Daimon’s taste for high fashion (which was transferred to Ana). For better or worse.

And it might be for worse. Reviews of Helstorm haven’t always been kind. And given the show’s provenance, the first season of Helstrom could be the last.

I hope not, though. While Helstrom isn’t up to Marvel’s usual standards, I was entertained. It also opens up the occult corner of the Marvel Universe, currently occupied only by Dr. Strange. Let’s hope that Helstrom comes back long enough for Ghost Rider to guest star.

I don’t even care which one.