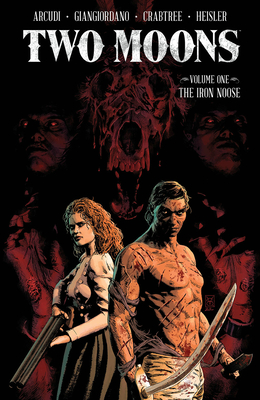 I can't help thinking of this as a Dark Horse horror title. Not just because of Arcudi's work on Hellboy and B.P.R.D., but also the horrific artwork of Giangiordano (who is mainly known for Marvel Comics covers), which is so compatible with the look of Dark Horse horror titles. The guy can definitely design monsters!

But this is a fairly fresh concept. Set in the American Civil War, it follows young soldier Virgil Morris, who finds he cannot escape his Pawnee heritage. Horrible as war is, after being visited by ghosts and visions he learns that there is far worse evil behind the conflict. In the beginning only he can see that some of the soldiers have been possessed by demons, who thrive on the hatred and violence they create. Then he finds an ally in nurse Frances Shaw. They fight the monsters to a standstill in this installment, including the poetic justice referred to in the subtitle of the collection.

The collection includes a great deal of bonus artwork: alternate covers, sketch covers, and an extensive sketchbook of character designs (with Arcudi's annotations).

I rather liked this series, but I'm not sure if I will continue with it monthly. It seems like it would read better in trade. Either way, I do recommend it.