Aug. 28, 2014 -- If anyone needs evidence that comics can tell any kind of story, adaptations of two Western literary classics by UDON should put the subject to rest.

UDON Entertainment (yes, named for the Japanese noodle) is a graphics studio that publishes mostly manga-style comics, graphic novels, art books and English translations of Asian comics, with strong ties to the videogame industry. And yet, despite being best known for comics like the various Street Fighter series and art books like World of Warcraft Tribute, UDON (and its partner Morpheus Publishing Limited) has recently adapted Pride and Prejudice and Les Miserables in the manga tradition -- and done them well. 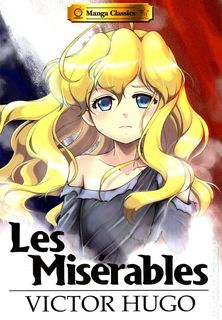 For some, that may seem counter-intuitive. Novels don’t come much more rooted in Western culture than Victor Hugo’s Les Miserables or Jane Austen’s Price and Prejudice. How could a Japanese approach work? And should it even be tried?

But that’s selling UDON, manga and the comics medium far short -- not to mention readers! As UDON Marketing Director Christopher Butcher explained in a brief interview, the company is hoping to reach and satisfy a number of different audiences.

“First and foremost, the line is a response to what we feel is a lack of quality adaptations of classic works in the marketplace, particularly for schools and libraries,” he said. “We wanted to put together books that looked and felt like commercial work at the same high quality we normally produce. But because of that, we feel that Manga Classics Pride & Prejudice could be just as likely to be a manga fan's next favorite shoujo manga! Really anyone who has wanted to read the classics, or who loves the classics and wants to rediscover them in a fresh way, is going to love what we've done.”

And it certainly is fresh, especially to those of us who grew up with the stodgy Classics Illustrated adaptations of half a century ago. And, while U.S. publisher Papercutz currently has a high-quality “Classics Illustrated” line available, they haven’t yet gotten around to Les Mis or Pride yet.

So it falls to UDON. And they have done a beautiful job.

Manga Classics Les Miserables ($19.99), drawn by SunNeko Lee, falls into the “big eyes” style of manga. As is usually the case with this style, it’s a little cartoony here and there, especially with girls, with even the men looking a little feminine. But anybody who has seen the standard illustration for Les Mis the play – you know, the one with the little girl with the big eyes – can intuit just how well this style meshes with the subject matter.

The art by Po Tse in Pride and Prejudice ($19.99) is rendered in a related style. Once again women have larger and rounder eyes than is normal, men are a bit feminine and Po Tse even indulges in chibis (the small, deformed cartoon characters usually played for laughs) in some scenes. But by and large Po Tse’s panels are lavishly illustrated, with elaborate rendering (especially for hair) that borders on the “photorealism style” employed by some Western artists. All in all, U.S. readers should feel pretty much at home. As to the scripts, they are true to the spirit of the originals, although some changes are always necessary when adapting content from one medium to another. As screenwriter Crystal SIlvermoon writes in an afterward about her adaptation of “Les Miserables” (with a scripting assist by Stacy King):

“As I am adapting the script for a manga that has very limited real estate, it is necessary to trim away some of the scenes to make sure that total story will not be broken into too many pieces. It is not just about taking the dialogue, characters and scenes directly from the book, expressing them through artwork, and calling it a manga.”

Butcher also addressed the technical challenges, noting that UDON was “very involved at the creative level, which is very different than most of this type of material, which is usually licensed and then translated.” And, unlike many UDON projects, the English-language editions available now are the first publication, with other languages planned for 2015. Care was taken also, Butcher said, to keep the books all ages friendly.

“American and international sensibilities were definitely incorporated into the development of the books,” Butcher said, “to ensure that events depicted in the original books are still present in ours, but handled in a sensitive way. A good example would be the story of Fantine in ‘Manga Classics Les Miserables,’ which effectively communicates her struggles while still being appropriate for a grade 6 classroom. It's a difficult line to walk, but I think both readers and educators will be happy with how we've handled it.”

There is one concession to manga tradition that is something of a gamble for UDON: Both books have to be read Japanese style, essentially an inversion of traditional Western orientation. Most youngsters and comics fans will expect that, but older readers may be in for a surprise.

“Honestly, the orientation of the books was something that we'd given a lot of thought to, before settling on the right-to-left, back-to-front reading experience,” Butcher said. “Most of the school-age readers we're targeting with these works feel that manga that's been 'flipped' to read in the Western orientation is 'inauthentic.'

“Whether you agree or not, there's not much point in creating a line of work that's going to be dismissed by its target audience out of hand. Our decision was to go with the Japanese reading orientation, so that the books would fit comfortably alongside 95 percent of the manga being published today. So far the reaction is incredibly favorable, with fans eating it up and librarians and educators seeing the right-to-left format as just one of the many unique features of this adaptation.”

One thing’s for sure: They won’t be hard to find. UDON’s Manga Classics line is available at both comic shops and bookstores, both brick-and-mortar and online. If you don’t find them at your friendly neighborhood comics shop or bookstore, Butcher said, they’ll be glad to order the books for you.

And once you get them, they won’t be alone for long. UDON is promising manga adaptations of Nathaniel Hawthorne’s The Scarlet Letter, Jane Austen’s Emma and Charles Dickens’ Great Expectations for this winter.

If they’re of the quality of the first two books, they’ll be comic books any teacher will be glad to see their kids read.

I've read both of these, they're not bad. They're reasonably good adaptations of the source material. One thing I noticed they did was to inlcude humorous four-panel comic strips featuring the characters, which is something you frequently encounter in manga, even fairly grim ones like Death Note.