Following up on discussion about ugly Silver Age comic book covers on another thread, I'm going to make this my first attempt at starting a new thread and posting an image.

Here's my nomination, Wonder Woman #159.  It's got that good purple thing going, but everything else about this is just eye-hurting. And people used to say Stan Lee used too many cover blurbs!

That's the one Maggie Thompson always turns to, and I can't disagree. 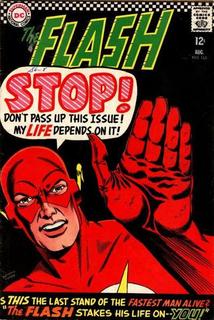 You have to wonder what they were thinking with all that type. Even if they didn't really want to explain what was going on, you'd think they would go with something more dramatic, like Julie Schwartz did with his Flash #163 cover. He always said it was his favorite Flash cover, but I find it extremely boring.

That WW cover is just filled with blah type, like that orange box. Burying all those words together in the middle of all that really takes away the impact. I think the white lettering at the top and the snipe in the lower corner was all they needed, and they apparently couldn't think up anything to do with the rest of the space.

I'm not even sure what's in second place, at least among the heavy hitters. There were no doubt plenty of blah or badly designed covers at other companies, but DC and Marvel had too good of artists to come up with something that isn't at least interesting. 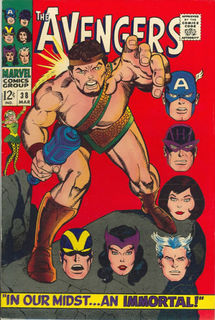 The only one that comes immediately to mind is Avengers #38, which has almost nothing going for it in terms of storyline or conflict. I've never been a big fan of the title's love of the floating heads motif, and this one didn't change that. Usually they used it to give more play to guys not featured, but at least the main scene had something going for it. In this case, not so much, and then they threw a bunch of heads on there, Some a little more expressive than others, and most of them looking like they were swiped from somewhere else.

Stan never met any white space he didn't think looked better (or at least sold better) with some copy on it. But he almost always had a compelling scene to work with that he dressed up, and he could never get so distracting that the actino of the image was lost. This one had nothing. 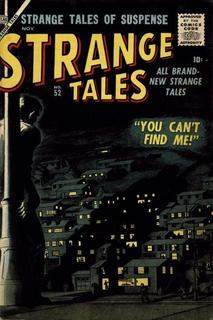 In trying to remind myself of some options, I came across this gem from Strange Tales #52, which just barely snuck into the SA in November 1956. It strikes me as a really bad idea for a cover, especially since the concept and title isn't anything that special. Ooh, a nighttime game of hide and go seek! I think I'm holding on to my dime.

Sorry to part company with you, Mr. SA, but (for my money) if Gil Kane ever did a bad cover for Marvel, Avengers #38 isn't it.  That's always been one of my favorite depictions of the Prince of Power.

And as for Strange Tales #52 -- It might not have worked well on the stands (which would make it de facto a bad cover), but I think it's a pretty evocative piece of noir artwork.

Horse races, and all.

There is, however, no excuse for that Wonder Woman cover.

That hideous Wonder Woman cover does raise an issue worth asking the master, Mr. Silver Age -- didn't DC believe covers with purple backgrounds and apes sold better than those without? (And, one would guess, a cover with an ape and a purple background would sell like gangbusters.) Or is that apocrypha?

Not that they'd be any sillier than Timely/Atlas/Marvel publisher Martin Goodman, who thought certain words in titles made them sell -- not content or even covers. Hence the many, many horror/suspense book with "weird" in the title, and the many Westerns with "Kid" in the title (and on the main character). According to a number of sources, Goodman kept a list of words he believed boosted sales, and would select from them when naming a new title. Famously, Stan Lee argued with the boss that content was king, which resulted in Sgt. Fury and His Howling Commandos, which all of Goodman's augers said would fail (clumsy title, no pet words, a war title when he thought Westerns were coming back), but Lee said would succeed because of the action-packed, "heroes with problems" Marvel approach. For a while, Lee was proved right but I don't think Goodman was ever convinced.

It's not a bad depiction of Hercules, it's just not much of a cover. What's he doing, reaching out to grab my 12 cents? Did anyone even notice the Enchantress in the back? If they wanted to do a Herc vs. Enchantress standoff--and frankly that would've gotten my eye a lot more--there were better ways to do it. And those heads don't seem all that upset about him getting whacked, or at least most of them don't.

Likewise, I'm not saying that the ST cover isn't an interesting piece of art, it just doesn't make an attractive cover. It's hard to figure out what's going on and when I do, meh. 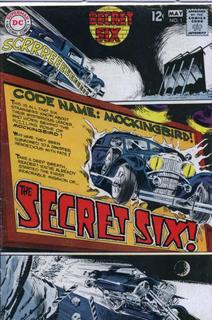 But, as I said, DC and Marvel had pretty good cover designers, so none of theirs stand out as truly awful--except for that WW one. I think a case could be made for Secret Six #1. That three-panel design with all the type to read to figure out what's going on isn't that great--but it's unique and maybe that helped catch people's eyes. And even at its worst interpretation, it doesn't match up to that WW one.

It's not a bad depiction of Hercules, it's just not much of a cover. What's he doing, reaching out to grab my 12 cents? Did anyone even notice the Enchantress in the back? ...  And those heads don't seem all that upset about him getting whacked, or at least most of them don't. 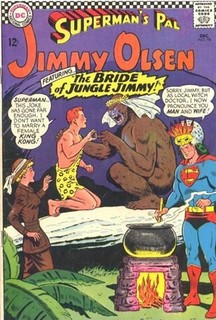 Yes, the rumor was that DC thought that purple covers raised sales. I never got an official confirmation on that one, but Julie told me specifically that they believed gorillas on the cover raised sales. Other sure-fire sales-boosters were jail cells, people crying, and the full Earth as seen from space. I don't know for certain that those DID raise sales, but the editors thought they did.

Needless to say, by the time SPJO #98 appeared, the comic was probably in enough sales trouble that they had to pull out all the stops! Between those two key sellers and those Go-Go checks, I'm guessing this issue's sales were off the charts. 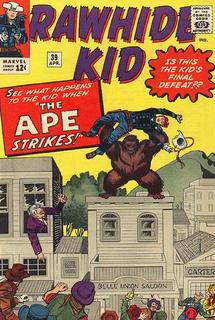 I've got an article on DC's obsession with gorillas coming up in the next issue of Hogan's Alley, which should be out later this year with any luck. No, that's not a typo.

Speaking of gorillas and Kids, as Cap was, the cover to Rawhide Kid #39, which features both, is one of the screwiest covers Jack Kirby ever did. It's not ugly, of course, but the proportions are mind blowing. The guy in the window is way too big for that room--and apparently has no feet! The people standing in the street are way to tall to go into the buildings! The gorilla is huge, and the Kid is even taller than he is. Clearly, this was one of those times when we had to heed the clarion call, "Don't Ask, Just Buy It!"

As much as it pains me to say it, I have to suggest a cover from Justice League of America.

Few Silver-Age artists' work resulted in such polarised opinions as Mike Sekowsky's.  Fans seemed to either love his work, or hate it.  There were few who took the middle ground.

I loved it.  At least, his work on JLA.  (I could go either way on the other series he handled.)  To me, the JLA title stopped when he no longer pencilled it.  But I have to admit, his cover work from c. 1966 on grew more loose and less detailed, resulting in some questionable products.  But none more so than this cover from JLA # 46 (Aug., 1966): 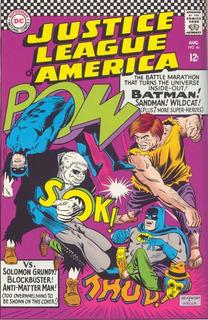 The absence of any background.  The outrageous onomotopœia which not only overwhelms the scene but, surrealistically, becomes a physical part of it.  The absence of any other member of the Justice League except for the Batman (courtesy, no doubt, of the Batmania gripping the nation at the time).  Just as notable---for this was the first half of that summer's JLA/JSA team-up---is the fact that only two Justice Society members are present; one of them hadn't been seen since the Golden Age.

And then there is all of that hyperbolic copy telling the potential buyer how great this issue is, honest!  Instead of telling us that the story included seven more heroes (and did Batman's name have to be that big?), just put them on the cover.

JLA # 45-6 has always been my favourite of the annual JLA/JSA team-ups.  Gardner Fox crafted a plot truly worthy of the word "crisis" (though, admittedly, some his prose was a bit bombastic on this go-around), and Sekowsky's art was given a revival by Sid Greene, taking over the inks on the series with these two issues.  (I haven't been able to identify the colourist, but he provided a subdued look which sharpened Greene's heavy use of blacks without making it garish, like some later JLA colourists did.)

But you can't tell any of that from this cover.

Well, I would have bought that Wonder Woman, and I wasn't a WW reader. I love origin stories. And whose hand was muffling her?

Gil Kane was one of the best cover men ever! Hercules looked like he was in 3-D!

As far as gorillas-on-the-cover theme, Gorilla Grodd wasn't on the cover of Flash until his third appearance and fought the Scarlet Speedster several times without being featured! And DC had a gorilla hero in Congorilla who never even got a Showcase!

I'm not a big fan of Sekowsky though when inked by Sachs, Anderson or Greene, it was enjoyable. Beyond the Bat-mania craze, he made the Sandman look like a cartoon character, losing all the mood of his original design. Not to mention, he robbed Solomon Grundy and Blockbuster of all sense of menace. If only Infantino, Kubert or Kane were allowed to draw a Justice League tale or two!

And the cover of Secret Six #1 wasn't just the cover, it was also Page One of the story!


That hideous Wonder Woman cover does raise an issue worth asking the master, Mr. Silver Age -- didn't DC believe covers with purple backgrounds and apes sold better than those without? (And, one would guess, a cover with an ape and a purple background would sell like gangbusters.) Or is that apocrypha?

As I understood it, DC not only favored purple backgrounds and apes, but also thought dinosaurs, motorcycles and someone crying were irresistible to the buyer.

It's probably no secret to anyone here that DC would conceive its covers before the story was written. This was a trick borrowed from the pulps. In the newsstand era, covers had to literally LEAP off the crowded stands and scream, "Buy me!" So it was all-important to have an eye-catching cover ... even if it didn't make much sense, and had little to do with the story inside.

And I love that nearly all-black Strange Tales No. 52 cover!