THE MONSTER'S CAVITY ACHES!: This episode enrages both Tracy and me. The kaiju Sheltar is napping on the bottom of the sea when a ZAT underwater training missile disturbs it and lodges in its mouth causing extreme discomfort if not outright pain. After trying unsuccessfully to dislodge the missile below the waves, the monster surfaces and tries on land. It's not really causing any damage; it's just trying to remove the missile. Even ZAT speculates that if the missile is removed it might go back under water.

ZAT uses the Sky Whale to drop a clamp on the missile and pull it loose, but they snag and pull one of Sheltar's teeth instead, causing it even more pain. Zat attacks and Ultraman Taro appears. during their fight, the missile is dislodged. ZAT arms it and fires it at Sheltar, blowing it to bits.

It was a terrible episode. Kotaro rips out a perfectly healthy tooth and lots of gum and mouth. Taro never tries to take the missile out. He only beats up the poor thing. Once ZAT loads it full of more explosives, Taro uses a powerful beam to blow the poor creature to literal flaming bits that rain down. I was furious!

If the rest of the episodes are like this, I will be incredibly disappointed. The kaiju monsters are not real or realistic at all but it is painful for me to watch one clearly innocent and in distress.

TARO'S HEAD FLEW OFF!: A greedy landowner is aggressively destroying a mountain to make room for new housing. The blasting unearths an idol which is tied to an ancient, Kirby-esque kaiju. This kaiju is unusual (for Ultraman) in that it is a giant samurai with armor, sword and shield. At one point it decapitates Taro (hence the title), but he gets better.

TARO'S HEAD FLEW OFF!: A greedy landowner is aggressively destroying a mountain to make room for new housing. The blasting unearths an idol which is tied to an ancient, Kirby-esque kaiju. This kaiju is unusual (for Ultraman) in that it is a giant samurai with armor, sword and shield. At one point it decapitates Taro (hence the title), but he gets better. 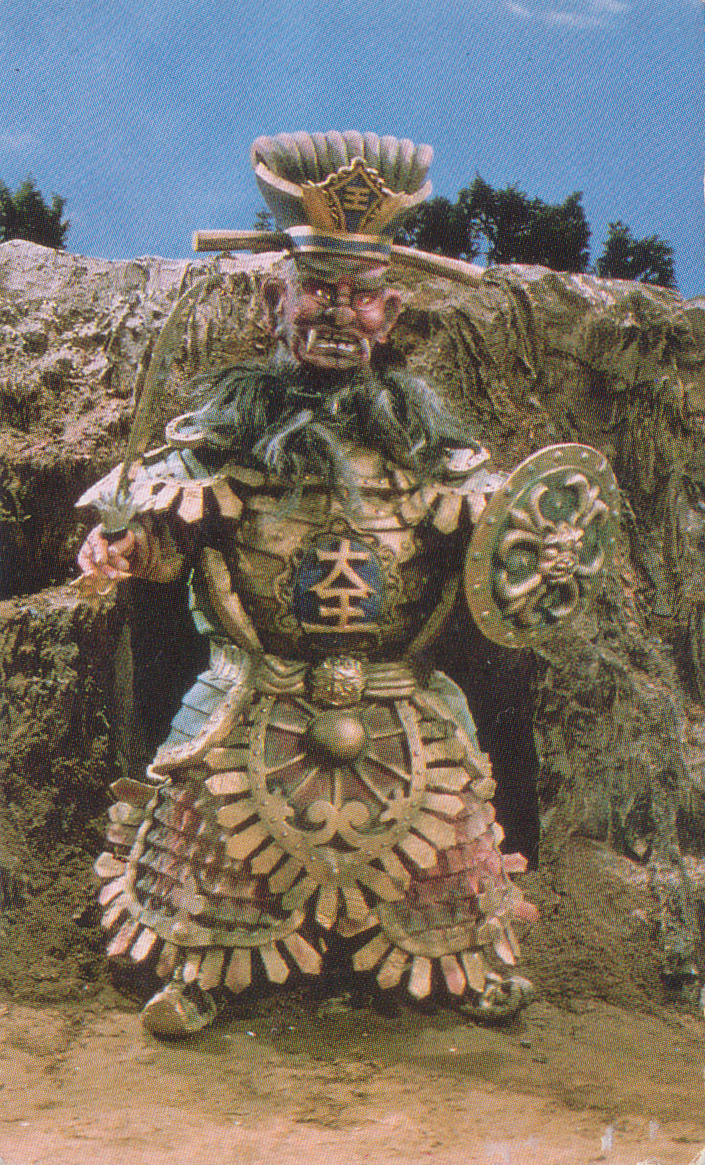 Enmargo is very much like Daimajin (except it doesn't change it's face).

YOUNG GIRL OF THE BLUE WILL-O'-THE-WISP: A little girl named Kaoru goes into the countryside to speak with her dead mother. Fires follow in her wake. Kaoru is teased mercilessly by a group of boys her age, but even worse the adult men chase her around threateding to tie her up. (What they intend to do with her at that point is unclear.) Kotara follows her and discovers that the real source of the fires is just as she described: an invisible kaiju which killed her mother.

THE MONSTER'S FLUTE SOUNDS: One of Kenichi's classmates, a young boy named Arihito, is learning how to play his grandfather's ocarina, The sound attracts the buck-toothed kaiju Okariyan. It is this monster which, attracked by the sound years ago, squished his grandfather. Yes, this monster did cause some destruction, but it was basically minding its own business until attracted by the music.

TWO BIG MONSTERS CLOSE IN ON TARO!: Do you ever get the idea that these episode titles give away too much of the plot? In this case, the title doesn't reveal that the monsters in question are "Leaf-Eating Monster Kemgila" and "Volcano Monstrous Bird Birdon." I would like to see a trading card set of the monsters from all the series (and a PVC set of all the Ultramen. Speaking of giving things away, next episode is titled "Zoffy Died! Taro Died Too!" Uh, oh.

While our internet has been down, we have watched...

ZOFFY DIED! TARO DIED TOO! (Talk about a spoiler in the title! This is the second part of three)

MOTHER OF ULTRA, MIRACLE OF LOVE!

SURPRISE! A MONSTER FELL FROM THE SKY

THE SINKING OF TOKYO NEW TOWN

WRATH OF THE MONSTER WITH CUB

I must say, these most recent episodes have revealed a disturbing trend. The monsters can be benign, even good, yet they are always fought, and quite often maimed, apparently just because they are monsters. I suspect the episodes are intended to teach children compassion (and I suspect adults show more empathy), but Tracy and I find them quite disturbing sometimes. Tracy has even threatened to refuse to watch if this trend continues.

THIS IS THE LAND OF ULTRA!: The focus this time is a family of six children, ranging in age from first through sixth grade, two girls and four boys. Because there are six of them, each one identifies with a different Ultra-brother. Their parents are presumed killed by a giant space moth (which is kaiju that at least deserves to be fought). The funny thing is, one of the ZAT team asks, "What would an outer space moth be doing on Earth?" Huh? Had he not seen the show (or any of its predecessors) before?

BURN! THE 6 ULTRA BROTHERS: This episode takes us to the Ultras' home planet. We've seen glimpses of it before (in this series, especially), but never so in-depth. It is an appropriately weird-looking place (all in miniature) with some decidedly Earth-like features, such as where the brothers went to school and the public pool where they used to swim. The oddest feature is that the sky is filled with pastel scarves instead of clouds. Also, in an illustrated section, the episode delves deeply into Ultra history. This episode stands out.