No, but when he flies he's Dyna Soar.

A NEW LIGHT (Part 2): "The battle between Ultraman Dyna and the monster on Mars ands with Dyna's victory. However, Asuka is having trouble with his new power."

The standout element of this episode is Mai Midorikawa, the self-described "Super GUTS' super lady." One of the 2K-teen series had two female leads: the love interest and one who was designed to be annoying. Mai Midorikawa has that character beat hands down. She is SO annoying! There is one scene in which the GUTS agents (Super GUTS agents, excuse me) are trying to decide what to call this new Giant of Light. Mai Midorikaw suggests Dyna "because he's so dynamic." There are three or four other suggestions, but she leaps around saying, "Dyna! Dyna! Dyna! It must be Dyna!" The episode doesn't say so explicitly, but I'm sure the others agreed just to shut her the f*ck up!

AWAKEN, ASUKA!: "Asuka is overconfident in his abilities and ignores orders by attacking a small monster which came from a meteor that fell on Earth."

Never before has an Ultra alter-ego been as unlikeable as Shin Asuka. He does outperform all of his fellow agents (rookie and experienced alike) but he is extremely cocky about it. He inappropriately hits on Ryo Tumimura, his superior officer, and he disobeys orders. For some reason (perhaps because of Asuka's father) Captain Hibiki lets him get away with more than he should. Three small creatures (about 10 meters in length) emerge from a meteor that crashed to Earth. Ordered to observe, Askuka pretends his radio didn't receive the order and attacks instead in order to prove that the recklessness he has displayed in practice will work in the field as well.

He destroys two of the creatures but, unknown to him or GUTS, the third, Cyclometra, escapes. Cyclometra finds Grossyna hibernating underground and merges with it. When Grossyna appears, Asuka insists that he be the one to confront it. the Captain agrees, but only on the condition that he accompany him. By the time they encounter Grossyna, GUTS has determined (through analysis of the Cyclometra creatures) that they have an "antimatter sac" inside their bodies. (The Cyclometra spreads its eggs by merging with another creature then exploding.) Just as they are about to attack, GUTS tells them to hold off, but Asuka ignores the order and separates his half of the dual-controlled craft from the Captain's.

Asuka lands and attempts to change to Ultraman Dyna, but fails. The Captain tries to save him from Grossyna, but his ship is downed and he is almost killed. Asuka later gets his head on straight and is able to transform. As Dyna he manages to defeat the creature without causing it to explode, but I don't see how the Captain lets Asuka remain in GUTS. Not only has he not obeyed a single order all episode, he has willfully disobeyed them. I know this is just the beginning of his character arc, but Tracy in particular is sick of him.

Apparently, I forgot to say anything about this one.

WINNING SHOT: "The baseball player Himuro, who's a friend of Asuka, returns to Japan. As Asuka tries to get him back on his feet, a powerful monster attacks!"

Himuro is in a slump after accidentally beaning a batter during a game. He and Asuka played ball together in high school, and the annoying Mai is a super fan of Himuro. The climax of the episode has to deal with Himuro coaching Ultraman Dyna how to throw a "knuckleball" of energy.

THE BIGGEST MONSTER ON EARTH: "A giant mushroom-shaped monster appears and declares it will earase mankind. A bacterial thread makes its way through the computer network."

Another episode I forgot to write up while it was still fresh in my mind.

THE FRIEND IN A BOX: "A girl picks up an an adorable creature in a small capsule. However, this is the cruel monster Gyabish who was locked up by Alien Dais.

A girl orphaned by a kaiju attack finds a cute, fuzzy doll in a plastic case. (The cynic in me thinks: merchandising.) She escapes Alien Dais who is pursuing it, but Gyabish breaks out of its cage and begins to grow. As it grows, it becomes less cute and increasingly ferocious. Alien Dais does not survive, but he gives the girl a locket with a picture of his daughter (a dead ringer for the girl), who was previously killed by Gyabish,

BAO-ON FAR AWAY: "After a giant meteor falls to Earth, the people of Furube village suddenly lose consciousness. the cause of this is Bao-on."

A serio-comic episode in which the roar of a childlike kaiju puts people to sleep. (I happen to think the gas it sprays from its nostrils may have something to do with it as well.) Things become serious when Bao-on starts to move from the countryside into the city. When Dyna tries to divert it, Bao-on thinks he's just playing. Bao-on puts even Ultraman to sleep!

ATTACK OF THE TWO THOUSAND CREATURES: "Super GUTS and Ultraman Dyna take down Giacuda. However, each cell of the monster starts moving again due to its powerful life force."

That pretty much sums it up. Most of these episodes, as imaginative as some of them are, are pretty formulaic: the monster appears and wreaks havoc, then Ultraman fights it for the last five minutes of the show. Every once in a while, as in this case, the episode begins with the big fight. After Giacuda is "defeated" it forms several thousand small duplicates of itself, then eventually reforms, so this episode is bookended by daikaiju fights. It's pretty much all action.

THE FORBIDDEN GEOGLYPH: "A monster appears in the skies. Kariya realizes the monster has a resemblance to the geoglyphs near the Andes and visits a former teacher."

Now that I am several episodes into the series, personality types have begun to emerge. Asuka is Dyna, of course; Ryo is the main female lead and Mai is the annoying one; Captain Hibiki is really corny (usually the captain is quite serious); Kariya is the studious one, whose research usually provides the answer to whatever problem may be at hand. 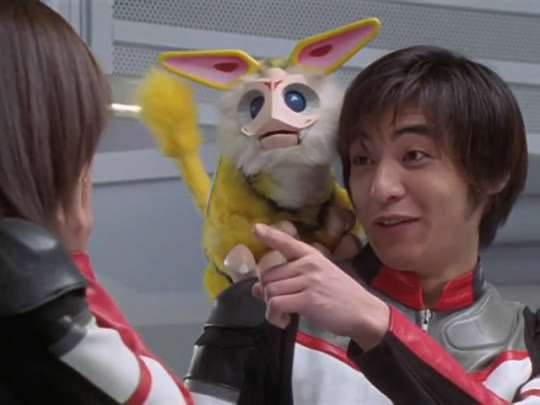 Here's a poser:  Which of those two looks goofier?

"Which of those two looks goofier?"

Too close to call.

Tracy says "yes." (She found photos of the Hanejiro toys while searching for a picture to post.)

Richard Willis replied to Steve W's discussion A Cover a Day
"....and she went on to play Wonder Woman on TV."
34 seconds ago

Richard Willis replied to Jeff of Earth-J's discussion Tales to Astonish
"Despite the fact that the High Evolutionary was later resurrected, as with Boomerang, I consider…"
17 minutes ago

Jeff of Earth-J replied to Jeff of Earth-J's discussion To be... HULK-inued!
"#99: You wake up in a cell next to Betty Ross, who is lying unconscious on the floor. You are…"
56 minutes ago

Richard Willis replied to Jeff of Earth-J's discussion Tales to Astonish
"To add to the confusion, when Stan and Jack were in the Army, the Air Force/Air Corps was, like…"
1 hour ago

Jeff of Earth-J replied to The Baron's discussion Watching "Unaging" Comics Characters "Move Past" Historical Events
"What about when the Human Torch and the Thing met the Beatles?"
3 hours ago

Jeff of Earth-J replied to Wandering Sensei: Moderator Man's discussion What Comic Books Have You Read Today?
"I didn't make it to my LCS this until Friday due to icy road conditions, but that's…"
3 hours ago