Permalink Reply by PapaLouANowNow on September 5, 2013 at 4:54pm

Considering all the different ways that Jamie got killed off in the "not-in-continuity" spinoffs!!!!!!!!! Figser.

And , speaking of Scots,Craig F. does indeed have a late-late series on "The Eye/Tiffany" Network here in the Sates,complete with a gay talking skeleton! 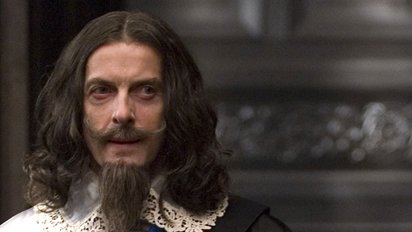 FOUR NIGHTS: We’re working our way through series six DVD set and are enjoying several extra scenes and episode prequels and short features we have never seen before.

“Good Night / Bad Night”: These two go a long way toward accounting for so many comics stories depicting the Doctor operating solo instead of travelling with a companion. Apparently he sneaks out of the TARDIS at night! On these two occasions, Amy was awakened from her, which effectively puts the kibosh to RTD’s notion that the Doctor and his companions never slept aboard the TARDIS. Well, then again, maybe his Doctors and companions didn’t.

“First Night / Last Night”: Details River Song’s “first night” at the Stormcage Containment Facility, as well as her “last night” before meeting the (11th) Doctor at The Library. Of course, with Moffet nothing is as straightforward as it seems. I rather enjoyed this two-parter; more than “Good Night/Bad Night” but not quite as much as “Time/Space.”

Some GREAT cameos in there!

"Do you think you could possible do this scene by yourself?"
"I suppose so. It might actually be an improvement."

I posted a video that they put out, how the Dr. regenerated into John Hurt. Sort of a mini-episode.

After recently watching “The Day of the Doctor” and listening to “The Light at the End,” I wondered which Doctor had met the greatest number of his other selves face to face.

The Tenth Doctor met three (including the Fifth Doctor in “Timecrash”).

The Eleventh Doctor met three as well (if you include the “Curator”).

The First and Third Doctors also met three each (in “The Five Doctors”).

The Second Doctor has met four (folding in “The Two Doctors”).

The Fourth, Seventh and Eighth have met four apiece (five for the Forth if he is, in fact, the Curator).

The Sixth has met a solid five (“The Two doctors” and “”The Light at the End”).

THE WINNER: The Fifth Doctor has met eight other Doctors face to face.

He met the First, Second and Third in “The Five Doctors”; he met the Fourth, Sixth, Seventh and Eighth in “The Light at the End”; he met the Tenth in “Timecrash.”

The poor old Ninth Doctor hasn’t met any of his other selves (as far as we know).

Richard Willis replied to Jeff of Earth-J's discussion Swamp Thing
"John Totleben said: Of course, it had been less than a year since we had driven a stake through the…"
1 hour ago

Lee Houston, Junior replied to Steve W's discussion A Cover a Day
"Been so busy with family matters I almost didn't make it here today! A couple of more Neal…"
4 hours ago

Rob Staeger (Grodd Mod) replied to Wandering Sensei: Moderator Man's discussion What Comic Books Have You Read Today?
"But seriously, that Tarzan collection sounds great! I'm not a big Tarzan fan, but I had a…"
12 hours ago

Luis Olavo de Moura Dantas replied to Jeff of Earth-J's discussion Swamp Thing
"Indeed.  Swamp Thing at this point may want to hold on to his humanity - or human traits, at…"
13 hours ago

Philip Portelli replied to Steve W's discussion A Cover a Day
"Their lack of cinematic success filled the JLA with shame! "
14 hours ago

Rob Staeger (Grodd Mod) replied to Jeff of Earth-J's discussion Dark Shadows
"Haven't made a lot of progress, but I saw episode 589 last night.A lot of soap opera…"
14 hours ago

Randy Jackson replied to Jeff of Earth-J's discussion Swamp Thing
"I personally found the story of these two issues not to be very interesting, but what I did really…"
15 hours ago

Jeff of Earth-J replied to Cavaliere (moderator emeritus)'s discussion What are you watching right now?
"SWAMP THING (2019 TV SERIES): After we read the Bronze Age Swamp Thing in 2017, Tracy and I started…"
16 hours ago