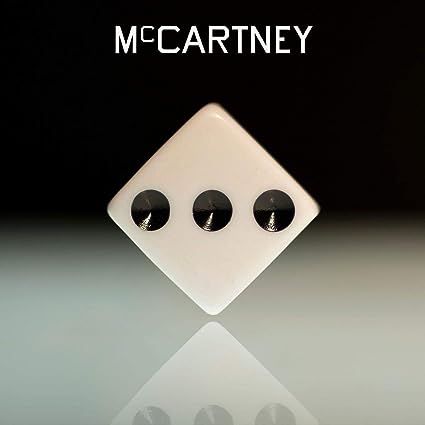 Today I am listening to McCartney III. Yesterday I listened to McCartney and McCartney II. What sets these eponymous albums apart from his other "solo" (i.e., non-Beatle) work is that he writes, produces and performs all of the music, playing all the instruments.

McCartney (1970) sounds unfinished, unpolished in comparison to his Beatles work. The songs are... okay... but they have the sound of demos rushed to production. As a matter of record (no pun intended), demos of many of the song's from Paul's first solo work eventually surfaced on the mid-90s Beatles Anthology. McCartney has negative associations for many, released mere weeks before the Beatles' final album, Let It Be. McCartney was accompanied by a press release announcing he was leaving the Beatles, which is how the other three learned of it (1970's version of telling them via tweet). the one truely outstanding song from the album is "Maybe I'm Amazed."

When Elwood Blues said, "So much of the music we hear today is reprogrammed electronic disco," it was the kind of music found on McCartney II (1980) he was talking about. I'm trying to decide whether or not McCartney II is my least favorite of all McCartney's solo work. Yes, I believe it is.

Stylistically, McCartney III is somewhere between the two, yet better than both (with the caveat that not a single song on it even comes close to "Maybe I'm Amazed"). We listened to the first six songs this morning on the way to Tracy's work, and I listened to the other five on the way home. I think it's comparable to his other more recent work, but Tracy feels his works are creative collaborations with other artists.

CRAZY WAY TO SPEND A YEAR

MY DAYS ARE NUMBERED

GEORGIA ON MY MIND

THE BALLOT OR THE BULLET

(This is NOT the song I had intended to play today.)

IS THIS THE LIFE WE REALLY WANT?

"This is a song Charles Manson stole from the Beatles..."

What the Cybermen sing on karaoke night

A song for the seditionists: HATE

...and one for the victims: FIVE MEN WERE KILLED TODAY

Richard Willis replied to Lee Houston, Junior's discussion Did Go Comics GO?
"..... what will AMS do the next time this might happen? If they have any integrity, they have…"
1 hour ago

Travis Herrick (Modular Mod) replied to PowerBook Pete, the Mad Mod's discussion Anything, Everything, or Nothing At All
"They are going to be remodeling all of the apartments in our complex. That includes replacing all…"
1 hour ago

Richard Willis replied to The Baron's discussion Movies I Have Seen Lately
"Jeff of Earth-J said: Didn't they show a succession of sculpted heads, from Pleasance to Gray,…"
2 hours ago

Jeff of Earth-J replied to Steve W's discussion A Cover a Day
""If he's magical, does he qualify as a robot?" I say no (but it doesn't bother…"
2 hours ago

Jeff of Earth-J replied to Wandering Sensei: Moderator Man's discussion What Comic Books Have You Read Today?
"Ligth week... very light week. QUICK STOPS #2: I was all set to make this my 'pick of the…"
2 hours ago

Richard Willis replied to Steve W's discussion A Cover a Day
"The Destroyer was a metal entity. If he's magical, does he qualify as a robot? I think so,…"
2 hours ago

Lee Houston, Junior replied to Steve W's discussion A Cover a Day
"Until his initial post Crisis On Infinite Earths return, I've only known Brianiac as a robot…"
3 hours ago