Last night, my wife and I finished the first series of Hidden, a BBC crime procedural set in northern Wales. As such, though most of the dialog is in English, quite a bit of it is in Welsh, with English subtitles. The pacing is slower than most shows these days, but I was still enthralled. There's no mystery here; you know who the kidnapper/killer is from the outset, but it's still suspenseful. It's eight episodes that make for a long horror movie in which the monsters are human, if inhumane. It's dark, but very interesting. If you've liked Scandinavian crime thrillers, I'd recommend this one to you, too.

I've never watched this episode (or very many of Perry Mason), but I am now imagining a courtroom drama with these actors in the roles you've identified. Mr. Whipple belonged in a jail cell. You can't tell me that toilet-tissue-fetishist wasn't hiding some dark secret. Earl McGraw, Mentor, and Commissioner Gordon would make a formidable team of older guys.

(The DC comic from the Saturday Morning Shazam! era, of course, remade Uncle Dudley into Mentor, which was a little odd).

I just watched an episode of Perry Mason in which Raymond Burr barely appears. Bette Davis plays attorney Constant Doyle, who becomes the central character while Perry is in the hospital. Dick Wilson, aka Mr Whipple in the Charmin ads, appears in a jail cell. Neil Hamilton, aka Batman's Commissioner Gordon, appears, as does Les Tremayne, Mentor from Shazam! The young defendant is played by Michael Parks, who would later play Earl McGraw in four Tarantino films and was Bronson in Then Came Bronson.

We flipped among CNN, CBC, and BBC once worked finished.

Most surreal moment: someone came up behind a CBC reporter during the live broadcast and shouted, "Black Lives Matter are terrorists!" I think that idiot will be disappointed to learn there is no award for Outstanding Achievement in Irony.

We did take a break to watch the latest episode of The Expanse, and we're two-thirds of the way through Mrs. America, though probably won't return to it until the weekend.

Mostly watching CNN and MSNBC, with occasional dips into ABC, NBC, CBS and the Washington-area local TV stations. WUSA9 (the CBS affiliate) gave a really good, comprehensive rundown at 11 p.m. on all that occurred (and, I noticed, forwent commercials).

Was watching CNN while the original count of the ballots was happening and switched to MSNBC, which gave me the first look at what was happening outside the Capitol while CNN stuck with the speechifying inside.

Lots of questions as to how the Capitol Police utterly failed to secure the Capitol building. Washington has something like a dozen and a half police agencies within the area -- including the Capitol Police, the Park Police, the DC Metropolitan Police, the Metro Transit Police, the uniformed division of the Secret Service, the FBI, the ATF, etc., etc. Even the Library of Congress has a separate police force. Why there weren't enough officers deployed to prevent this -- when there have been more officers for smaller and non-violent crowds like the Black Lives Matter protests in June -- needs to be answered. 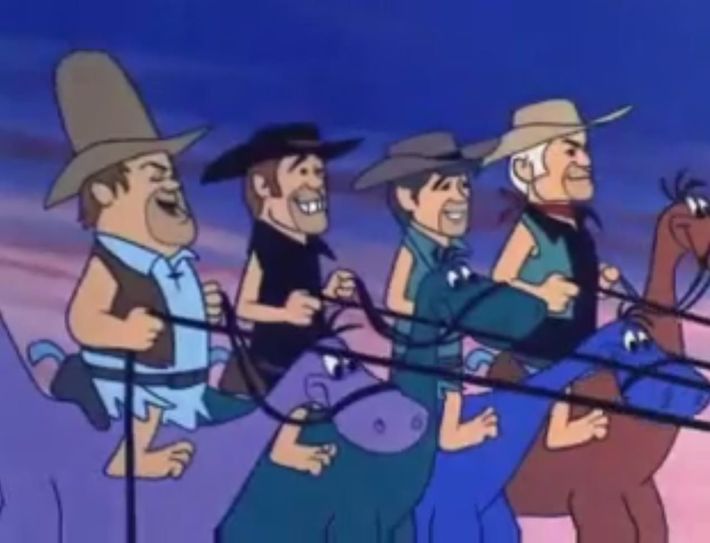 Here are the Cartrocks who live on the fictional Rockarosa Ranch.

We've been watching Bonanza so, of course, we had to watch this episode of The Flintstones.

STAR TREK ENTERPRISE - "FUTURE TENSE": When I first started my Star Trek spin-off re-watch project there was one episode in particular I was eager to see, but i didn't know for certain which one it was. I thought it was probably from TNG season six or seven since I was less familiar with those than the earlier seasons. When that proved not to be the case, I thought it was from VOY. (I knew it wasn't DS9.) When I got to the last episode of VOY I had seen and still hadn't come to the episode, I began to doubt my own sanity. I then did what I could have (and probably should have) done all along: looked it up online. [I guess I could have asked here, too; I'm sure someone (probably Bob, if no one else) would have known the answer.]

It ended up being the 16 episode of the second season of ENT, "Future Tense," in which the crew finds a time-travel ship "bigger on the inside than it is on the outside." I had no way of knowing that it was a riff on Doctor Who when I saw it for the first time (or even the second time, since I didn't start watching Doctor Who until 2010). Anyway, there's not much beyond that which harkens back to DW, plus it was a follow-up to an earlier episode I don't clearly recall.

Permalink Reply by JohnD on January 23, 2021 at 9:11pm
Watching "Svengoolie" featuring "Man Made Monster" with Lon Chaney Jr. All in all, a terribly boring film.

I have that on VHS. If you think that's terribly boring, you should see Dracula vs. Frankenstein, his last (which I also have on VHS).

I have that on VHS. If you think that's terribly boring, you should see Dracula vs. Frankenstein, his last (which I also have on VHS).

Good lord, I've sat through two of the three films of that title, and sought out what clips I could find of the the third. You'd think someone could have made at least a passable Dracula vs Frankenstein. Every time, they end up with something less interesting that what a couple of kids with Aurora models might have imagined.

What am I watching right now? One Night in Miami was pretty good, and I finally saw Kiss Me Deadly (1955), which I've missed until now despite having a long-time interest in noir. It's interesting, problematic, and has cast long shadows.