I read the first story of Brave and Bold #183 this morning, a Batman team-up with the Riddler. It's a fun story, by Don Kraar (misspelled as Don Krarr) and Carmine Infantino, in which a mystery author is kidnapped and Batman and Riddler are forced to team up together to solve the clues to find him. But MAN, is it about the wordiest Batman story I've ever read -- and I've read Batman prose stories. When I have a chance, I'll take some pictures of some of the more egregious panels. The poor letterer.

Permalink Reply by Wandering Sensei: Moderator Man on May 15, 2017 at 12:10am
Batman/The Shadow 1: This was fantastic. I really liked the addition of Batman's forensic robot. This is a great story with a nice mystery by Scott Snyder (whose wordiness is kept in check) and Steve Orlando, with fantastic art by Riley Rossmo.

Batman 22: The Button continues in this issue, continued from The Flash. I'm looking greatly forward to the next issue to see where this story is going. So far so awesome.

In review, B&B started out as an adventure title in 1955 featuring the Silent Knight, the Golden Gladiator and the Viking Prince. Four years later it converted to a try-out book and introduced features such as the Justice League of America, Suicide Squad and Hawkman. With issue #50 it became a team-up book and, fueled by “Batmania” generated by the television show, it eventually became a Batman team-up title. After the last two non-Batman team-ups in #72-73, the title featured Batman in every issue from #74 on. It is at this point The Bronze Age Brave & Bold Omnibus begins.

The omnibus reprints issues #74-109, all but two of which were written by Bob Haney. Bob Haney wasn’t too concerned with continuity (even if the hero Batman teamed with was from another Earth), but his stories were “well structured, with a threat, a reason the characters came together and a resolution” (as described by Robert Greenberger in his introduction to the volume). As of issue #74, B&B was edited by George Kashdan and the art was by the team of Ross Andru and Mike Esposito. I have only recently come to appreciate Andru’s style on Amazing Spider-Man, but if it was cartoony there, it’s downright comedic here.

Issues #74-78 featured the Metal Men, the Spectre, Plastic Man, the Atom, and Wonder Woman & Batgirl together. From my post-Crisis perspective, seeing Batman teamed up with the likes of the Spectre and Plastic Man didn’t bother me too much, although I’m sure it would have bugged me had I been a reader at the time. Right around the time of the final episode of Batman on TV, B&B got a new editor, Murry Boltinov, and the tone of the series was about to change. Although the stories would continue to be written by Bob Haney, the art was about to change drastically.

The Spectre had just teamed up with the Earth-One in Brave & Bold #72 (Jl'67) so there was a precedent.

And Plastic Man had his own series in the mid-sixties though it may have already been cancelled when B&B #76 came out. As bad as it was, it got worse with his next appearance!

All these stories were chocked filled with goofiness at various levels with the world being populated by many sentient robots, ancient Asian demons, circus folk capable of defeating super-heroes and the peril of pretending to fall in love!

Here's a look at one of those overstuffed panels from The Brave and the Bold #183. The letterer is John Costanza, who earned every red cent of his paycheck here.

The writer, Don Kraar, wrote a lot of Conan comics for Marvel. Since the established style of those books, under Roy Thomas, was already pretty wordy, he probably fit right in. As they used to say on those old anti-drug PSAs -- "I learned it from YOU, Dad!" 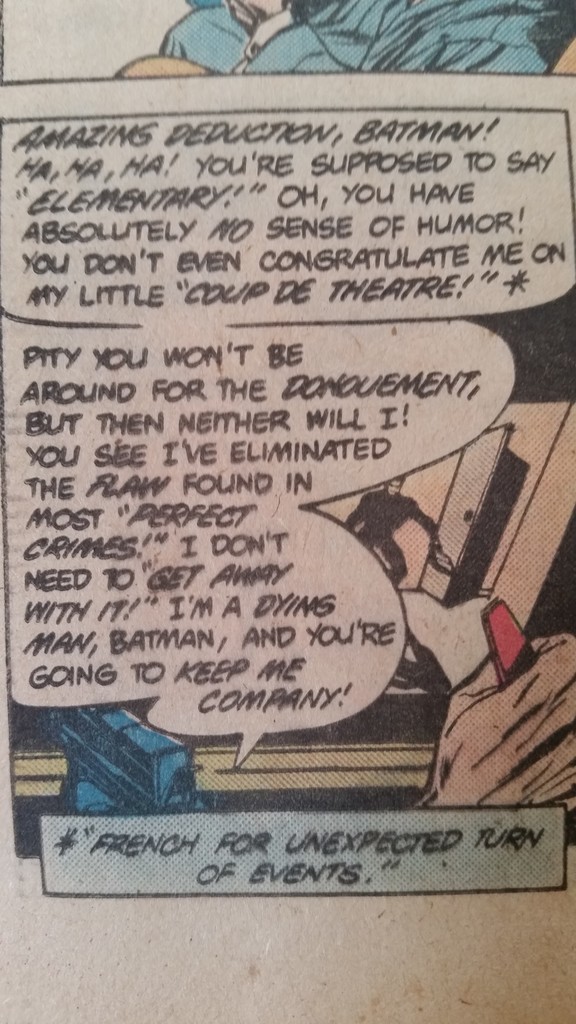 You should also get Creepshow 2 movie which is just as well done as Creepshow.

I didn't even know there was a Creepshow 2. We'll see if my wife likes the first one.She's seen it before, but not since it was first released. She's still grossed out by the cockroach story.

STRANGE TALES (#147-152): I’m a fan of Steve Ditko, but I’ll be the first to admit he’s an acquired taste. After his seminal run on the series, the first artist to take his place was none other than “Wild” Bill Everett. I am a huge fan of Bill Everett (no acquired taste there), and I think Dr. Strange never looked better than in this six-issue run. There… I said it! Bill Everett is a better artist than Steve Ditko. Two of these issues were reprinted in the first Doctor Strange treasury edition, but I haven’t read them in 40 years. I have accumulated some of the others but have never read them. For all intents and purposes, this is my first time through this run.

MARVEL MONSTER OMNIBUS: I’m up to 1959. (Started at 1954.) So far, the earliest ones have mostly been sci-fi with a twist. I’m only just entering the phase of giant monsters. Sometimes Kirby did the covers but not the interior. Some of the covers he illustrated in 1959 were of giant monsters, but inside the stories he illustrates are mostly sci-fi.

When to a music festival in Atlanta this week and rode with a friend. On the way back today I read vol 1 TPBs of both the DC Rebirth Wonder Woman and Detective Comics. I enjoyed both, I think I may have liked Detective a bit more though.

STARLORD: My hobby consists of three phases which I like to think of as acquisition, reading and discussion. Sometimes these phases overlap, sometimes they are simultaneous, sometime they are separated by years. I don’t remember what got me interested in the character Starlord. It was probably the early ‘80s color reprint of the Chris Claremont/John Byrne version originally presented in the black and white Marvel Preview magazine #11. It was only the character’s second appearance, but was a total revamp of the first, Marvel Preview #4. The Steve Englehart story was heavily based on astrology, an angler no other writer would have been able to continue, at least not without loads of research. The reprint also added a framing sequence by Chris Claremont and Michael Golden.

After reading that, I moved into the “acquisition” phase, buying random appearances of the character as I came across them, but not necessarily reading them. After I joined this board, the “reading” and “discussion” phases overlapped, and I led a discussion of all of Starlord’s appearances through 1996. Toward the end of that, someone linked a web-site which had already done the same thing, but in much more detail. (If I knew in advance that web-site existed I wouldn’t have bothered.)

Now, due to the confluence of the new Guardians of the Galaxy movie and Starlord’s backstory with Kitty Pride (as alluded to in X-Men Gold), I’m back in the “reading” phase again. Now, however, it’s easier than ever for anyone interested in reading and discussing to bypass the acquisition phase entirely (well, almost) by buying the handy-dandy Starlord tpb, reprinting all of the early appearances. Here’s what it includes, what I am in the midst of reading now.

That’s an eclectic mix or writers, artists and formats that one finds pretty much only in comic books. I think it’s fascinating to trace this character’s origins, and I look forward to sampling some of his more recent appearances in the days to come.

Wasn't Starlord considered not to be part of the Marvel Universe originally?

I knew about the character and I had the Marvel Spotlight/Premiere issues which were late 70s, I think but when was the mini-series published? And when was he 100% in the MU?