Finally finished Golden Age Green Arrow Volume One. Again, it's not the greatest, but I can't help hoping for a Volume Two to finish reprinting all the GA stories I've never read. (I've probably read everything the Amazing Arbolester appeared in from JLA #1 to 2010.)

The early years were extremely formuaic: GA and Speedy would take on some crooks, who would get the drop on them and tie them up, but the two would escape and catch the crooks on the second encounter. Not only formulaic, but implausible that everyt single crook they met would choose to leave them alive. (The murderous ones would put them in a complicated death-trap, which of course they would escape. They'd have died pretty early on if the crooks who tied them up were smart enough to take their arrows away.)

But the later stories in this collection branched out a bit, and got more plot-focused. They felt almost Silver Age-y in being plot-heavy. Also, the art throughout is pretty reliable, with the bulk handled by George Papp. So the strip was consistent and relatively entertaining.

Also, did you know G.A. had his own version of The Joker? I didn't either, but there he is. He's a former circus acrobat who was a target for various midway gains but was too nimble to be easily hit. He turned to crime, and started wearing a clown costume. His crimes were very humor-themed, and he was called such familiar nicknames as the Prince of Pranks. Given his circus background, he wore a bull's-eye and called himself ... yes, Bull's-Eye.

Again, I'd love to see a Volume Two to see when this character's last appearance was.

Oh, and one other thing: About midway through the Battling Bowmen started calling the Arrowplane the Arrowcar. No in-story reason was given.

Yeah, I can't see how it's going to be a good thing.

The gig economy is a reality, and it's getting realer. It's not a good thing, unless you're rich.

However, did you read of the mild scandal involving Bendis having a character using " the A word?

I also read VENOM #5 and DAREDEVIL #60 over this time period.

Yes, I did hear about that. I wasn't offended, though, because the character shouting it was a villain. It was not being shown as a valid criticism.

However, did you read of the mild scandal involving Bendis having a character using " the A word?

DAREDEVIL #607: Mike Murdock, Matt's fake twin brother from the Silver Age, appeared last issue, and my first thought was, "Oh no, we'll spend 12 issues finding out who this guy is." Which was a shame, because I thought it was kinda fun having this personality back. Much to my surprise, we find out how Mike Murdock has come to exist in this very issue, and now I can enjoy Mike's wacky (and kinda murderous) antics without resenting the slow burn. This is fun!

THE PUNISHER #1: I skipped the last series, where Frank had the War Machine armor. (Tony Stark/Avengers would pursue him to the ends of the earth immediately, and I refuse to accept that a guy who launched two illegal, worldwide "Armor Wars" would allow any plot device to stop him. On Earth-Cap, it simply didn't happen.) So I don't know Frank's current status quo, which appears to be exactly what it usually is. And we are treated to a new Baron Zemo who talks more like a PR guy than a pompous SIlver Age villain, which is kinda funny, especially how weaselly he is. Plus, it looks like Castle actually takes out a major supervillain, something he should have been doing since he first appeared. It won't last, of course, but it was satisfying to see it finally happen.

WEST COAST AVENGERS #1: Just as advertised, this is a sort of unprofessional, ad hoc team that promises wacky humor with the super-heroics. Which is fine by me; these are largely second- or third-generation heroes, young adults who are flying by the seat of their pants, and that's how I'd expect them to behave. Other good bits:

* America makes another remark about how Hawkeye II is secretly hot for her, which Kate dismisses impatiently. Given how LGBTQ is occurring more often and more organically in Marvel Comics it might actually be true, but it's funnier if it's not true. So I'm assuming it's not true, in order to enjoy Kate's discomfort.

* Hawkeye Sr. will not be a regular. That's good. It would look weird for a first-generation hero to be hanging with these kids. He's written as immature, so he would fit, but he's just too old/mainstream.

* I usually hate Quentin Quire, but he gets his comeuppance occasionally here, which I do enjoy.

X-MEN GOLD #34: Storm's battle with a new African "god" is filling the bulk of this title, which is only mildly interesting, but is going to end next issue. Issue #36 is the final issue, so I guess they'll wrap up all loose ends then. That's why I'm still on board.

X-MEN RED #7. Such a strange title. Two new characters I don't care about, several old hands I do care about who don't really do anything, led by a resurrected Jean Grey who keeps making speeches but also doesn't really do anything, all living in Atlantis with Sub-Mariner, whose abrasiveness always seems to evaporate in X-books, because the plot calls for it. Living underwater as they do, and using "Searebro," shouldn't they be the U-Men? I guess it's marking time until Extermination, because there's seems to be a lot of chit-chat and meaningless fights that make no forward progress.

Living underwater as they do, and using "Searebro," shouldn't they be the U-Men? "Nah, I copyrighted that."

DAREDEVIL #607: Mike Murdock, Matt's fake twin brother from the Silver Age, appeared last issue, and my first thought was, "Oh no, we'll spend 12 issues finding out who this guy is." Which was a shame, because I thought it was kinda fun having this personality back. Much to my surprise, we find out how Mike Murdock has come to exist in this very issue, and now I can enjoy Mike's wacky (and kinda murderous) antics without resenting the slow burn. This is fun!

I've read most, but not all, of those Mike Murdock stories, and I'm still stunned at the sheer audacity of them. Anybody who wonders why Lois Lane can't tell Clark Kent is Superman really has to wonder why Karen Page and Foggy Nelson couldn't tell "Mike" was Matt -- especially as they both wore sunglasses all the time, the better to hide their dead eyes.

But I'm glad they didn't drag out the reveal. It's more fun to just get on with it and find out what Mike wants -- and what he wants to do. I wonder how "Mike" will take the news about Karen?

Batman/Huntress: Cry for Blood #5-6: This was great. I loved the connections of the Huntress to her past, the Question, and the explanation of how she ended up being who she is. It didn’t make her seem bad at all, as I believe Huntress was often shown for being a “killer” back in the 2000s.

Black Canary (1993) #1-4: This series, by Sarah Byam and Trevor Von Eeden, is awesome so far. I can’t believe it’s never mentioned. There is also her miniseries (which I believe predates this one) by the same creative team, so I will have to read that one soon too. What this really shows off is what a fantastic artist Trevor Von Eeden is. He reminds me of a cross between Alex Toth and Tim Sale. This isn’t the first time I’ve noticed him, but it just reiterated to me what a great artistic force he is. He should be getting jobs still!

In another strange coincidence, I had the Black Canary mini in my hands yesterday. I'll try to reread it this week.

As for what I did read:

Victorian Underground #1-6: Basically Sherlock Holmes Vs Zombies but with a stiff British upper lip! Holmes looks a bit too young here but it's a fitting companion to the novels Sherlock Holmes Vs Dracula and Doctor Jekyll and Mister Holmes.

Awesome! I will make a point to read it too in the next couple of days.

In another strange coincidence, I had the Black Canary mini in my hands yesterday. I'll try to reread it this week.

My apologies! I have the first Black Canary mini subtitled "New Wings" (N'91-F'92) by Sarah Byam, Trevor Von Eeden who's inked by the legendary Dick Giordano who has strong connections to the character.

It was okay. It involved corruption, greed, drug cartels, white supremacists and a LOT of Daddy issues, though thankfully not from Dinah. Ollie shows up briefly just to remind everyone who the grownup in their relationship is! (Answer: not him!) There's also a Vietnamese-American "Shock jock" with his own problems over his heritage who falls for Dinah.

Dinah's look changes her with no blue leggings and finally wearing gloves!

We're at the peak of DC's "grim & gritty" phase here so there are few light moments. At this point in time. the Black Canary is a founding member of the Justice League, trained by the Justice Society and had lost her sonic powers in a brutal attack in Green Arrow: The Longbow Hunters. So she's trying to recover from that emotionally here. 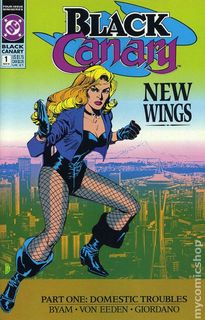