FLASH: SAVAGE VELOCITY: I have been waiting a long time for these issues to be released in HC. when they are finally collected... they're in tpb. I'm still holding out for an omnibus edition.

"The issues themselves have an edgy, indy-comic feel to the pacing"

Funny you should say that. I liked these issues, but I didn't like them as much as Baron's Nexus or Badger.

It would be interesting to re-read this run some 35+ years on. I want to read the Barry Allan archives/omnibuses first, though. If a Wally West omni hasn't been released by then, we'll see.

"I don't think we'll ever have a character who 'grew up with readers' like Wally West did..."

I thought this was going to be a hardcover too, Jeff... didn't realize it was a paperback until about a month before it shipped.

And yeah, I don't think Baron ever worked as well at DC as he did on his own books.

STEEL CAGE: One page back I posted my thoughts on the first issue of a new series from AHOY! Comics, Penultiman. His actual first appearance, however, was in this one shot: "3 Comics Enter... 1 Comic Leaves!" (I am reminded of Marvel Comics' "U-Decide" fiasco from the '90s.) Anyway, readers were to vote on which of the three features they liked best, and that one would be awarded its own series. The other two were "Bright Boy" by Stuart Moore and Peter Gross, and "Noah Zark" by Mark Waid and Lanna Souvanny. I didn't know about this contest until after-the-fact (obviously), but I would have voted for Penultiman anyway., so AFIAM it's all good.

I've seen the first two episodes of Swamp Thing, since it's now on the CW. I like it, which I suppose is a different thread. But it reminded me that I had never gotten around to reading the original run of the series. So I read Swamp Thing: The Bronze Age Vol. 1 over the weekend. There were some significant changes from the first appearance in The House of Secrets #92 to the beginning of the Swamp Thing series.

But after that, a lot of the mythos was established very quickly. We get Alex Holland blown up and tossed into the swamp, along with his bio-restorative formula; Matt Cable as his investigator (who moves from an enemy to an ally); nemesis Anton Arcane and his Un-Men were introduced in the second issue; and (perhaps most importantly) white-haired Abigail Arcane, Cable's romantic interest at first, but later to become the Swamp Thing's partner..

Writer Len Wein favored a baroque style; the description of Swamp Thing as a "muck-encrusted mockery of a man" seems to show up half a dozen times in each issue. Artist Berni Wrightson illustrated most of this run, in a distinctive style that he later considerably refined. It was a bit of a slog for me, between Wein's verbosity and the unpredictable twists of the plot. Somehow ST manages to travel from Louisiana to Europe and back, with plot twists that sometimes feel almost random.

I last read the original run of Swamp Thing three years ago when the omnibus was released. You didn't mention anything specifically about Saga of the Swamp Thing #1-19. Did you read those as well?

[SPOILERS for the Alan Moore series]: In issue #2 of the Wein/Wrightson version, Swamp Thing transforms back into Alec Holland. We know from the Alan Moore version (specifically "Anaromy Lesson") that Swamp thing never was Alec Holland in the first place; he was only a plant who "thought" it was once a man. I explanation for that is that Swamp Thing didn't "revert" to Alec Holland, but rather then Anton Arcane hypnotized to think he had. Also (speaking of House of Secrets #92), Moore eventually folded that into continuity.

[SPOILERS for #21-24 of the original series]: The Swamp Thing also "reverted" to Alec Holland during the last storyline of the original series. I cannot account for that and consider those stories apocryphal. If, after reading those and moving on to Saga of the Swamp thing, you are confused as to how "Alec Holland" became a muck monster "again," that story can be found in the last Challengers of the Unknown storyline, #81-87 (sadly not included in the omnibus. The omnibus ends with Swamp Thing Annual #1, an adaptation of the first feature film. Frankly, the omnibus "reads" better if one were to read the annual before the rest of the series.

[SPOILERS for the Martin Pasko series]: I bought this entire run at a quarter sale decades ago (mid '90s) at a quarter sale, but I never got around to actually reading it until the omnibus. I was really very pleasantly surprised to discover that one of Alan Moore's stories (the one with the flooded town filled with aquatic vampires) was actually a sequel to one of Pasko's stories. I shouldn't have been surprised; his acclaimed Captain Britain run incorporated aspects of every previous version of the character as well.

Yes, I've read all of Saga, including the Martin Pasko run. I don't think I own all of it anymore, but there must be quite a few bargain bin single issues, since for a long time the only thing collected was the Alan Moore issues. I remember hunting down all of the Vertigo issues specifically. Was not planning on an epic re-read, but who knows. 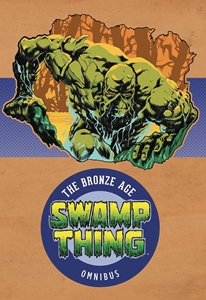 I've been reading "Joker War" as it progressed. It ended last week with Batman #100, although the next few weeks will have "aftermath" issues in Nightwing, Batgirl, etc. I don't have much good to say -- not because of quality, but because of my own Joker fatigue.

Some observations, so SPOILERS

Better you than me, Cap. Former member Battmatt said over on Facebook he considered "Joker Wa: the Joker story suffering from Joker fatigue. I don't care, no sale. I was pretty much done with him during "Last Laugh" and that was 2001.

I also have Kingpin fatigue in DD (I remember telling one of my friends, "He has other villains you know?"

And Darkseid fatigue in DC.

I've been reading "Joker War" as it progressed. It ended last week with Batman #100, although the next few weeks will have "aftermath" issues in Nightwing, Batgirl, etc. I don't have much good to say -- not because of quality, but because of my own Joker fatigue.

Some observations, so SPOILERS

But in the end, Joker appears to die but doesn't and goes into hiding (again). He has lost an eye, thanks to Harley, but jeezy pete, we all know that will be fixed somehow.

I remember that at the end of No Man's Land, Sarah Essen saved a falling baby (thrown in the air by You-Know-Who) by catching it, allowing the Joker to shoot her in the head. James Gordon, her husband, is contented with "knee-capping" the Joker, who laments he "may never walk again." Shortly thereafter the Joker reappears in a new story, strutting like a 20-year-old. That was when I was done with him.

I have been in a Steve Gerber mood lately, or maybe a Gene Colan mood. More likely, Ahoy! Comics' Bronze Age Boogie has put me in a 1970s mood. Here's what I've been reading lately...

MAN-THING: So far, just Fear #19 and Man-Thing #1. I started a discussion of Steve Gerber's Man-Thing a while ago, but drifted away from it unfinished. I know it's still there, though, and may resume at any time depending on the level of interest (both mine and yours).

HOWARD THE DUCK: I did do a discussion of Howard the Duck a while ago (including the b&w issues, piggy-backing off the one Randy started), and I did actually finish it. Don't know if I'm gong to bump that back up to the top (or even if I'll discuss it at all); depends on whether or not I can think of anything new to say). so far I've read up through #2.

THE TOMB OF DRACULA: I have never finished reading this entire series, although I started it twice before. (I've also never launched a discussion of it.) Now I've started reading it a third time, and I've broken one of my cardinal rules: rather than picking up where I left off last time, I've started over at the beginning yet again. The second time I didn't get as far as I did the first; I'm hoping this time to beat my own record. Currently I'm up to #9. I always seem to start this series around Hallowe'en.