A stretchy character reshaping his/her face was new to me when they used it with the Elongated Man on the Flash TV show. I didn't know it had been used on Mr Fantastic.

It happened when Reed & Sue bought a house in Connecticut in order to provide a more stable environment for Franklin. 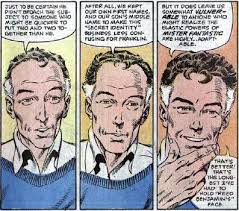 Their neighbors were comic strip characters. 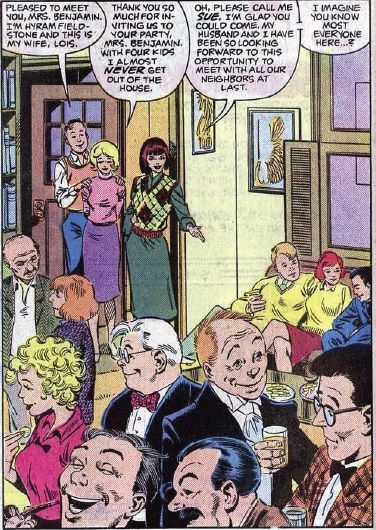 JUSTICE SOCIETY: Based partially on the series finale of Stargirl and partially on DC's 1st Issue Specials, I decided to read something I would actually enjoy: All-Star Comics #58-67 & DC Special #29. I can't tell you how long it's been since I read it, but I know it's been at least 16 years, because I'm reading the tpb version which I haven't read since I bought it, and it was released in 2006. Ah, Wally Wood (and Joe Staton, too).

When I was a teenager many years ago I took my comic reading very seriously, I wanted explanations for things that I thought were illogical and Reed's body was one of them. I wondered how can he think when his head is flattened to the width of a sheet of paper, what happened to his lunch, how could his heart pump blood, did he have blood, how do his eyes work etc? He was a father so some biological functions were working!

The answer I came up with was Reed doesn't stretch he alters space, so when he reaches across a room for an object his arm remains normal and the room shrinks. When he slides through a crack in a door to him the door appears wide open. This doesn't work for all situations (the face adjustment for example) but it was close enough for me to stop obsessing about it and move on to how does Spider-man stick to surfaces.  He doesn't he can locally alter gravity, this again isn't perfect but worked for thirteen year old me

Sorry for the long post but these things have been rattling around my brain for 60 years now!

Oh, I forgot to mention Mr. Fantastic's new power yesterday. In order to disguise himself, he reshapes his face. But that's not a new power; John Byrne introduced his ability to do that back in the '80s. I just thought I'd mention it because it's unusual. His new power... in one scene, without saying anything about doing so at all, he moves his eyeballs to his fingertips! First, ew. Second, how do his powers even work that way? He's just standing there with empty eye sockets, using his hands to more closely inspect something.

I look for scientific explanations of the impossible from scientists. 'The Science of Superman" and "The Physics of Superheroes" documentaries to name a couple. Sean Connery Quote: “Nothing is impossible, only mathematically improbable" makes suspension of disbelief even more enjoyable.

I eventually just decided that all the laws of physics in the Marvel universe are controlled by comic power. All the super powered heroes, the mutants and gods just have the ability to access a certain aspect of the "power cosmic", that explained away all the problems of powers in the "real world".

I look for scientific explanations of the impossible from scientists. 'The Science of Superman" and "The Physics of Superheroes" documentaries to name a couple. Sean Connery Quote: “Nothing is impossible, only mathematically improbable" makes suspension of disbelief even more enjoyable.

Ha, yes that's an unintended truth. 13 years old me would have hated that but 69 year old me is very happy with that typo.

When I read "comic power" I thought it was intentional (like "cartoon physics").

I wish I could claim to be that smart but sadly no. It's a simple error.

When I read "comic power" I thought it was intentional (like "cartoon physics").

I love the way Marvel is doing a lot of their collections these days: excerpting pages or panels in order to tell a story from a particular point of view. For example, The early appearances of the Silver Surfer and the Inhumans have both been handled that way in paperback. In "omnibus" format, both Dr. Doom and the Black Panther have been granted such volumes. I didn't buy either of those, however, because I have run completely out of shelf space. The solution would seem obvious: buy another shelf. Unfortunately, I have also run out of floor space. One volume I did buy was...

THE BLACK WIDOW STRIKES OMNIBUS: This one starts with her sundry appearances in Tales of Suspense, follows her into Avengers (excepted), and from there through Spider-Man (#86) to her own solo series in Amazing Adventures and from there to Daredevil (#81). The second (roughly) half of the book is more "recent" appearances, from 1990 through 1998. Many of these are graphic novels and one-shots I have never read, so I considered the omnibus a good buy. There is no real "flow" to these later stories, however, and I would have chosen some different stories if I were editor. For example, besides that one issue of Daredevil, no other issues set during their partnership (which ran through #124) is included, nor is anything from Champions (although both series are summarized). I also noticed another omission which would have significantly improved the flow.

I recently read a number of different limited series which retold classic Avengers stories. The problem with that reading project was that it pretty much skipped over the Don Heck years, and it is a stack of those backissues upon which I cut my teeth. The problem is, unless I want to break out my originals from their longbox (which I don't), the reproduction of the early Marvel Masterworks editions is crap. Then I thought of the Black Widow omnibus, which excepts a number of those stories and scratches my itch without having to reread the entire run.

There is one omission, however, which would have greatly benefitted the collection had it been included. The excerpt from #57 skips directly to the excerpt from #63 in which Nick Fury calls the Avengers for help finding the Black Widow, who has gone missing while on a mission. The Widow's appearance in Avengers #63 (April 1969) is an unheralded crossover from Captain Marvel #12 (April 1969) in which her mission began. She's not featured on the cover of Captain Marvel #12, nor is there a footnote or mention in "Bullpen Bulletins" or anything in either issue to promote the crossover; you had to read both series to catch it. that's unusual, but I'm not surprised even Marvel missed it.

Luke Blanchard replied to Jeff of Earth-J's discussion Tales to Astonish
"For the bulk of his first story the Stranger is our size. He turns into a giant when he reveals…"
42 minutes ago

Richard Willis replied to Steve W's discussion A Cover a Day
"Talk of copying reminded me of this court case. The cover of this comic uses a photograph of singer…"
4 hours ago

Irma Kruhl replied to Steve W's discussion A Cover a Day
"Yep, Adkins sure took Wood's advice to heart--not surprising at all, since Adkins started out…"
10 hours ago

Richard Willis replied to Jeff of Earth-J's discussion T.H.U.N.D.E.R. Agents
"As I mentioned, I began tradewaiting with DC v2. Consequently, as a tpb of DC v2 was never…"
10 hours ago

Dave Palmer replied to Steve W's discussion A Cover a Day
"That's amazing. Wally wood did say "Never draw anything you can copy, never copy anything…"
10 hours ago

Lee Houston, Junior replied to Steve W's discussion A Cover a Day
"I'm sure she's still around the Marvel Universe(s) somewhere. (Image courtesy of the…"
10 hours ago

Richard Willis replied to Jeff of Earth-J's discussion T.H.U.N.D.E.R. Agents
"NoMan says that the enemy now has “a cloak,” while wearing a purple version of the…"
11 hours ago

Steve W replied to Steve W's discussion A Cover a Day
"Quick switch from Romance to thriller for one cover only..."
11 hours ago