This week I've been going everyday to let my friend's dog out of the house after work, so they can go potty. One of his co-workers made some apple turnovers, and she insisted he take some to me as a "thank you" gift. I thought that was very sweet.

I'd kind of like to think this is canon.

From the Wish I Could Screen-Cap Department:

In the 3rd Six Million Dollar Man TV movie ("The Solid Gold Kidnapping"), there's a scene where Oscar calls Steve from Heathrow airport.  Just to make the point that Oscar is in England -- this is an international espionage adventure, folks -- Oscar makes his call, not from a secure, private line, but from a very distinctive red phone booth. In the background, you can see a sign on the wall that says "Heathrow."

Not on the sidewalk.  Literally in the parking lot.  Five feet from the curb, tucked neatly between the white lines of an unoccupied parking space.

Mobile phones were weird in the '70s.  (And Richard Anderson should have won an Emmy for doing that scene with a straight face.)

Zoidberg got the girl. 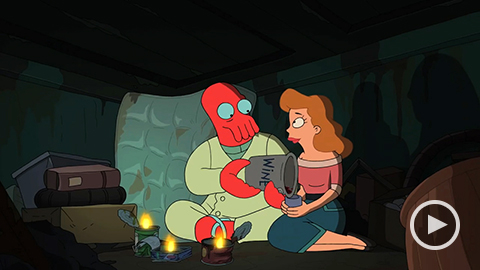 It was really on Saturday, but I saw Adam West in an episode of The Rifleman and that made me immensely happy.

Check out the trailer for Escape from Tomorrow, an unauthorized horror movie filmed secretly at Disneyworld. It's a real 100-minute movie: I'm not sure it sends the right message.

Getting my tree put up. Tomorrow it will be the outside lights. Can't help but smile when I see the Christmas tree.

We set up our new artificial tree, an attractive six-footer. Our old one was a huge eight-foot monster. And I did a first installment of the outside lights, front and back. And re-hung the icicle lights we had hanging in the parlor that were taken down for a ceiling repair. They're year-round, but it's nice to have them back in time for the season! This is all a bit early for us. But I'm going to be working in Greenville this weekend, so I won't get back to decorating until next weekend.

Watching the kids on makeshift sleds going down the hill in my apartment complex.

While in the midst of a mad rush, I stopped in at my LCS today to cash in on an opportunity. I took in some canned goods for a food drive that they were participating in, and was able to get the Age of Apocalypse Omnibus for $40. (They had several omnibus editions for $40...) While I was there, I was able to also cash in on a chance to buy up all of Grant Morrison's New X-Men editions for THREE DOLLARS a piece. I didn't have any of them.

For the price of less than TWO hours of tutoring, I was able to buy all that. It was pretty sweet.

I was at the White House for a holiday tour, and at the end saw the is toddler, who was giddly with excitement. She was wearing a gray knitted dress with pink pipling on the hem and sleeves, pink and gray leggings, and had a pink flower in her hair, and she was off-the-charts adorable.

Captain Comics replied to Captain Comics's discussion Bond #4: 'Diamonds Are Forever'
"I've said before that Roger Moore is my favorite Bond, but I don't think I've ever…"
2 hours ago

Richard Willis replied to Jeff of Earth-J's discussion T.H.U.N.D.E.R. Agents
"ISSUE #4: RAVEN: A hostage situation at the New York Stock Exchange, but the "hostage"…"
5 hours ago

Jeff of Earth-J replied to Jeff of Earth-J's discussion T.H.U.N.D.E.R. Agents
""This was me trying to be funny." I thought that might have been the case but i…"
8 hours ago

Jeff of Earth-J replied to The Baron's discussion Movies I Have Seen Lately
"DR. NO: I'm gearing up for Cap's book/movie discussions, but he's following book…"
8 hours ago

Jeff of Earth-J replied to Steve W's discussion Comical Comic Cuts
""Can anyone come up with a caption?" I can go you one better. Here's the…"
11 hours ago

Richard Willis replied to Jeff of Earth-J's discussion T.H.U.N.D.E.R. Agents
"Captain Comics said: I think the Companion works best as something to read. A lot of mini…"
12 hours ago

Richard Willis replied to Jeff of Earth-J's discussion T.H.U.N.D.E.R. Agents
"Jeff of Earth-J said: I suspect that another scene was intended for pp.11-12 and was dropped at…"
12 hours ago