What to look for at Free Comic Book Day 2021

On Saturday, Aug. 14, participating comic shops will offer at least 50 titles absolutely free. OK, some shops will require a minimum purchase. But that just means you get more stuff!

With so many books available, smart shoppers will know in advance what books they’re looking for. Here’s a peek at some of the best:

That’s “Marvel” and “DC,” as if you didn’t know, the IP sources for the biggest movies and TV shows on the planet. Here are the six offerings from the Big Two: 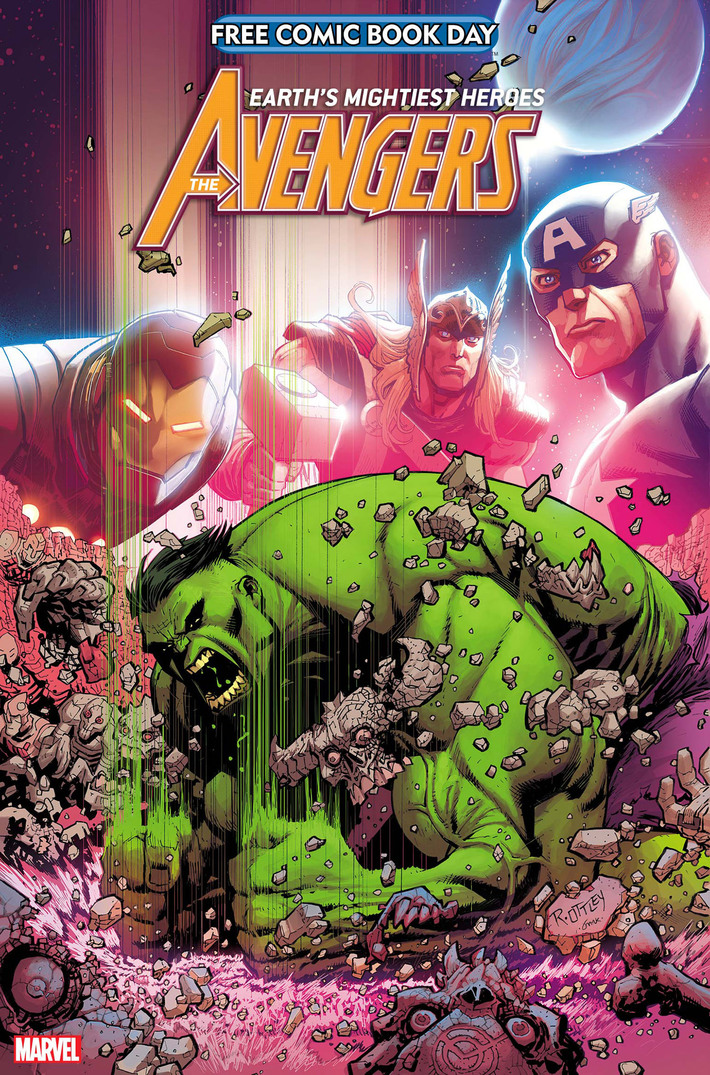 Avengers/Hulk: Meet Avenger Prime, who lives in a land beyond time, and who … wait a minute, that’s all I know. He’s a brand-new character. But from what I can glean from the previews, he can change the past, present and future. For example, we get a good look at an army of Deathloks and an aquatic Avengers featuring Sub-Mariner, Namorita, some kind of shark/Hulk hybrid … man, that’s not gonna end well.

In a second story, the Hulk battles M.O.D.O.K. It’s not the first time this brains vs. brawn battle has occurred, and it usually doesn’t end too well for the big head in the little chair. I’m sure there’s a twist to surprise us. 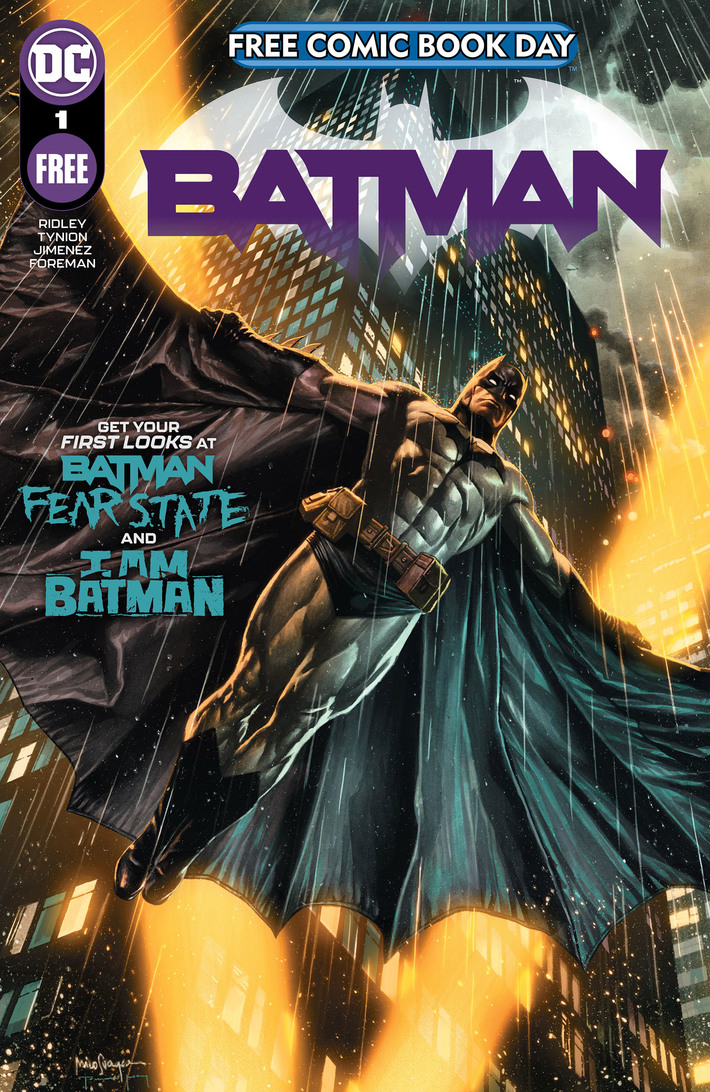 Batman Special Edition: The Dark Knight is headed for a Gotham City where a fascist police force is in charge, vigilantes are outlawed, Bruce Wayne is broke and Batman is believed dead. We know this from some books published back in January, set a few years in the future. This book gives us our first look at “Fear State,” a Scarecrow rampage that sets the stage for that future scenario, called “Future State.” A second story focuses on Batman’s “Future State” successor, Jace Fox, in the days before he dons the cape and cowl.

Hey, nobody said the future was going to be all flying cars and robot maids.

Batman and Robin and Howard/Amethyst Princess of Gemworld Special Edition Flipbook: Yep, that title is quite a mouthful, but it speaks truly: This book offers a preview of a graphic novel titled “Batman and Robin and Howard,” and when you flip it, you get a preview of “Amethyst, Princess of Gemworld.” They’re both Middle School-level, and both are scheduled for release on Nov. 9.

The first is about Damian Wayne in a new school, where he discovers he’s No. 2 behind Howard, the brainiest, most athletic kid at Gotham Metro Academy. Needless to say, this isn’t going to stand for Damian, perhaps the most competitive Robin yet. Methinks he will learn a lesson.

In “Gemworld,” Amaya is exiled to Earth for a magical prank gone wrong. Can her sanity survive a week with … ordinary, non-magical kids? Methinks she will learn a lesson as well.

Spider-Man/Venom: Marvel didn’t provide a description or preview of this one, so we’ll just have to guess. But given that both characters have movies coming out this year, I imagine this book will go fast.

Suicide Squad Special Edition: Get ready for the “The Suicide Squad” movie (Aug. 6) with a story about everyone’s favorite man-eating supervillain, King Shark! This Special Edition also provides a preview of the just-started miniseries “Suicide Squad: Get Joker,” in which Amanda Waller’s ne-er-do-wells are charged with … oh, yeah, you read the title, so you know.

Teen Titans: Beast Boy Loves Raven Special Edition: Writer Kami Garcia and artist Gabriel Picolo have already given us two charming young adult graphic novels with new, modern origins for Rachel “Raven” Roth and Gar “Beast Boy” Logan of the Teen Titans. The star-crossed duo met at the end of the “Beast Boy” GN, and now … well, I guess the title gives this one away, too. But it’s not just kissy-face! There’s other stuff, too, like Deathstroke!

It may seem like Marvel and DC own all the big franchises, but quite a few have eluded their corporate grasp. And some of them have FCBD books this year, too:

2000 AD Presents All Star Judge Dredd: A new origin for Judge Dredd! A preview of the UK graphic novel “Dreadnoughts”! An adventure with fan-favorite Judge Hershey! And yet another standalone Dredd story! Man, that’s a lot of bang for zero bucks! Archie Past Present & Future Fun: He may be super-serious on TV, but Riverdale’s famous redhead still makes with the funny in print. This book has a story featuring a variety of Archies, including Pureheart the Powerful, the original 1941 version and Archie 1955. You’ll have to read the book to see how they can all co-exist.

The Boys: Herogasm: If you’re watching The Boys on Prime, then you’re hopefully A) an adult, and B) very hard to shock. Well, there’s a storyline coming up in season 3 that very will might do the job. “Herogasm” is based on a 2009 “The Boys” miniseries, and Dynamite Entertainment is thoughtfully reprinting the first issue for FCBD.

Vampirella: In 2019, Dynamite launched the latest series starring the Daughter of Drakulon, written by superstar writer Christopher Priest (Black Panther, Justice League). That series will be hitting its 25th issue soon, and to celebrate, this year’s Dynamite FCBD offering will reprint the first issue — this time with a cover by superstar Alex Ross.

Worlds of Zorro: The Masked Avenger is now being published by American Mythology, who offer a new story by fan-favorite writer Don McGregor in this issue, plus a couple of reprints from the regular book. If you’ve missed the The Fox, here’s a chance to catch up.

This one’s a bit confusing, because currently the Star Wars Franchise is available at three different publishers. Marvel Comics has the main characters and more serious stories, IDW Publishing releases more youth-friendly versions and then there’s Viz, a manga publisher.

What they have in common this FCBD is “High Republic,” a massive, interconnected, cross-publisher initiative across books, comics and magazines, telling stories in a common era — one set centuries before Luke Skywalker, and heretofore unexplored.

Just Beyond: Monstrosity: I haven’t read this BOOM! Studios offering, but it sounds intriguing. The premise is a haunted movie studio bought by the father and uncle of Ruthie and Ezra. Soon to be a series on Disney+, Just Beyond follow the adults as they make horror movies, while Ruthie and Ezra live them! Featuring the likes of Wolfenscreem, Lagoonatics and The Wasp-Keeper!

Stray Dogs: This Image miniseries, which has almost reached its conclusion, genuinely gives me the willies. In the first issue, reprinted for FCBD, we meet little Sophie, who has been taken in by The Master, a man with a surprising number of other dogs who have recently lost their owners. That’s because The Master is a serial killer … who kills dog owners and then steals the dogs! Look, it’s one thing to kill people. But threaten puppies? That’s inhuman.

Trese: When crime has a supernatural slant in Manila, the cops call Trese. That’s the premise of a Filipino anime of the same name, which just made its Netflix debut in June. U.S. publisher Ablaze has the comics franchise, with “Trese Vol. 2: Unreported Murders” about to make its debut. This FCBD offering gives a taste of that graphic novel, one spiced by the myths and legends of the Philippines.

Sounds interesting? Well, keep in mind that I’ve only described 16 books … out of 50! If you like, you can check out the others elsewhere on this site, and you can even find the location of the nearest comic shop with the Comic Shop Locator.

Or you can just go to your LCS and pick up a random handful. The price, as they say, is right.

I dropped in on a comics shop I haven't been to in at least two years if not longer (because, y'know, COVID, plus it's not that close to home). I found the counter was moved from one side of the store to the other and was farther away from the door. It had a big table of Free Comic Book Day offerings, but limited patrons to five at the most and no duplicates. However, one could get five more if one brought in a bag of perishable foodstuffs to be donated to charity.

This is what Free Comic Book Day, 2021, looked like locally:

Your videos are always a kick. Amazing how many people get involved and it's not at a con,

Usually even more people participate, but COVID, the movement of one shop to a potentially lucrative location that's a little further if you're walking the route (but has great parking), the hash construction has made of the Old East Village, and a less promo meant smaller crowds.

Our biggest comic shop had a big crowd, as usual. Some random dude took it on himself to help police the door, limiting the number of people inside by only allowing X number of new people in when X number left. We usually have our local Star Wars club (Brigade? League? I have forgotten what they're called.) usually have some cosplayers out with a sign-up table, but not this year.

Permalink Reply by JD DeLuzio on August 17, 2021 at 1:47pm
Does “all” include the Trailer Park Boys? Or was that just in Canada? It was moderately amusing, and includes a couple TPB versions of the kind of game pages that you’d find in old kids’ comics.

Also, Diamond lists as one of the Silver books FCBD 2021 The Tick, but it had no description and I have seen no sign of it online or at the LCS. I'm guessing it didn't happen.