When it comes to the hair color of comics characters, movies and TV often get the red out

Here in the real world, redheads make up 2% of the population, the smallest cohort of any hair color. It’s not entirely because thousands were burned at the stake in medieval times as witches, but that certainly didn’t help. Today, Scotland has the highest percentage of carrot-tops in the world, and even there it’s only 13%.

But in comics, they are thick on the ground.

And a lot of them make it to TV or the movies with that hair color intact. You’re no doubt familiar with a lot of them, like Archie Andrews, Barbara Gordon, Natalia Romanova, Cheryl Blossom, Matt  Murdock, Jean Grey, Jimmy Olsen, Mary Jane Watson, Mera, Pamela Isley and Red Sonja.

But sometimes movies and TV shows ditch the red, usually opting for the actor’s natural hair color. To correct this outrage, here is a reminder of some characters who should be remembered as redheads regardless of how they’re portrayed on screen. 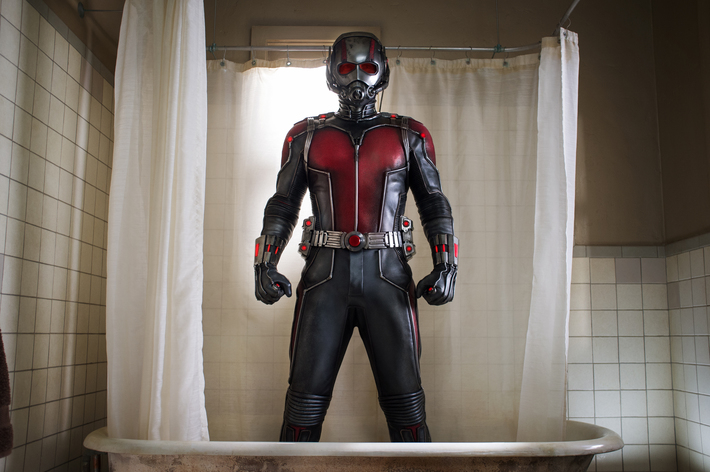 Here’s Paul Rudd as Ant-Man. He’s supposed to have fiery red hair under that helmet, but Rudd has brown hair. Keep the helmet on, Paul! (Credit: Zade Rosenthal. © Marvel 2014)

Yep, the second Ant-Man has red hair. Except in the movies, where he’s played by dark-haired Paul Rudd. I guess it doesn’t matter, since you can’t see his hair through that enormous helmet. 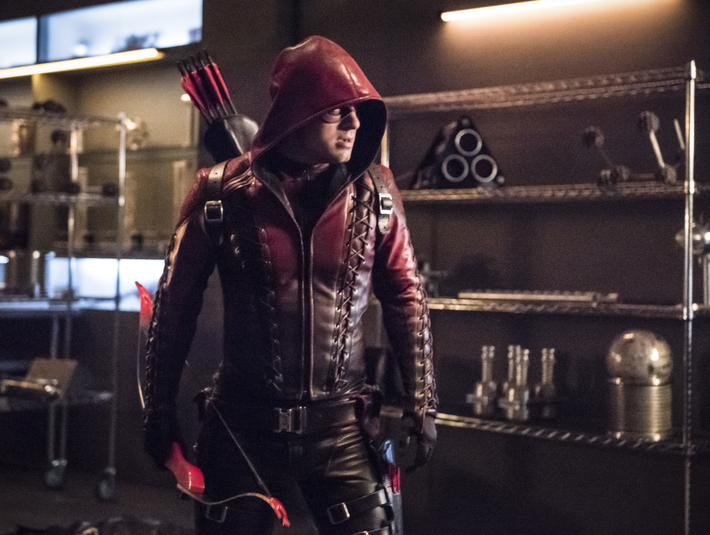 Roy Harper started out as Speedy, Green Arrow’s red-haired (and red-uniformed) sidekick. And he stayed that way for decades.

But then things got a little out of control. He became a heroin junkie, had a baby with a supervillain, changed his superhero name to Arsenal, added a bunch more weapons to his repertoire, lost an arm and got it back. Then he died and came back as a Black Lantern.

Roy Harper on TV’s Arrow got hooked on a drug called mirakuru, but got better. He was played by brown-haired Colton Haynes who, to my knowledge, has never had a baby with a supervillain. Does that look like The Chief’s flaming red hair to you? Of course not. It looks like Timothy Dalton’s non-red hair, because that’s what it is on Doom Patrol. (Mark Hill/ 2020 Warner Bros. Entertainment Inc. All Rights Reserved.)

As played by Timothy Dalton on Doom Patrol, The Chief is dark-haired, going on gray. But in the comics, he was carrot-topped and red-bearded. At least he had hair, which is more than you can say for Cliff “Robotman” Steele and Larry “Negative Man” Trainor.

Actor Hartley Sawyer may be brown-haired on The Flash, but not so the Randolph “Ralph” Dibny of comics. Red-Haired Ralph was introduced in early ‘60s Flash comics as more-or-less comic relief, a supporting character with an irreverent attitude and Plastic Man’s powers. But soon his fiancé (and later wife) Sue Dearbon arrived, and their vibe turned into a Nick-and-Nora schtick that was quite entertaining.

Sawyer has been fired from “Flash,” so we might not see Elongated Man again anyway.

Not only is Daimon the literal son of Satan, but his sister Satanna (Ana on TV) is also devil spawn. Alas, neither Tom Austen nor Sydney Lemmon, who played the siblings on Hellstrom, have red hair.

Is it kosher to include a guy on a list of redheads whose most famous physical characteristic is that he’s bald? Well, he wasn’t always a cueball. He appeared as a redhead in the early 1940s, and after a brief interregnum in the ‘60s, where Young Lex was depicted with brown hair, he usually has red hair.

Which you wouldn’t know from TV or the movies, where all the actors who play Lex seem to favor the bald pate.

Josie was modeled by artist Dan DeCarlo on his redheaded wife, Josie DeCarlo, after she wore a catsuit on a cruise. Josie and her friends are in a band called the Pussycats, which was eventually added to the cover logo.

On TV’s Riverdale, Josie is played by Ashleigh Murray, whose hair is a luxuriant dark brown.

Clark Kent’s high school sweetheart has always been depicted as a redhead in the comics, but her appearances in other media haven’t been as consistent.

It started out so well, with Stacy Hadiuk (Superboy), Diane Sherry (Superman: The Movie) and Annette O’Toole (Superman III) all sporting red hair as Lana. But Emily Procter played her as a blonde in Lois & Clark: The New Adventures of Superman and Kristin Kreuk was a brunette in Smallville. They’re quickly running out of hair colors for her.

In the comics, Medusa was introduced before the rest of The Inhumans as a supervillain (she got better), and her floor-length, prehensile red hair was hard to miss.

On TV’s Inhumans, Medusa (Serinda Swan) appeared with all that glorious hair — briefly. Because early on bad boy Maximus (Iwan Rheon) shaved it all off! I imagine the resultant stubble was still red, but it was hard to tell.

Supergirl opted to go with a Black actress (Sharon Leal) and dark hair for this character, but since she’s a shapeshifting White Martian, she can look any way she wants to. In her native state, in comics and on TV, she’s bone white with no hair.

She appears with red hair and green skin in the comics and on the Young Justice cartoon, but like on the TV show, that’s just the way she chooses to appear.

Of course a fifth-dimensional imp would be a ginger! Well, at first. He’s been depicted with white and brown hair over the decades as well. As a magical being, I guess he can look however he wants to.

Peter Gadiot and Thomas Lennon, who both played Mxy on Supergirl, have brown hair.

Potts was introduced as Tony Stark’s secretary in 1963, with red hair and a stereotypical temper to match, but now she’s usually the CEO of whatever business Tony’s running, like in the movies. She also has her own suit of high-tech armor, and goes by “Rescue” when she wears it.

Gwyneth Paltrow went strawberry blonde to be more comics accurate when playing Pepper Potts in all those Iron Man movies. But it always looked more “blonde” than “strawberry” to me.

Walter Kovacs became the terror of the underworld by inventing a constantly shifting mask, wearing elevator shoes and being completely insane. Under that mask, he had flaming red hair and freckles, like an evil Opie.

Jackie Earl Haley dyed his hair red for the Watchmen movie, but you could be forgiven for not remembering that. In some of the few scenes where Rorschach isn’t wearing his “real face” (like at the end in Antarctica), the lighting makes Haley’s hair look brown.

Starfire, of the Teen Titans, is a buxom, statuesque alien with golden skin. Her flaming red hair actually appears to be on fire when she flies, streaming behind her like a comet’s tail.

TV’s Titans pretty much dropped all of that, probably because it wasn’t practical on a TV budget. But actress Anna Diop does sport a commanding head of red hair. I can’t tell if it’s a wig or just dyed, but I’ll give her credit for trying.

Patricia “Patsy” Walker has had one of the most diverse careers of any Marvel character. Introduced when the company was still known as Timely Comics, her adventures were in the Archie-style, teen-humor vein. In 1964, her various titles switched to the more serious romance/young career genre. Which only lasted until 1976, when Patsy discovered the discarded costume of a character named The Cat and became the superhero Hellcat.

Pretty much the only consistency throughout Patsy’s many iterations was her red hair. Except on TV’s Jessica Jones, where actress Rachael Taylor, who plays "Trish" Walker, is blonde.

Permalink Reply by Doctor Hmmm? on November 12, 2021 at 7:04am
As a lifelong sucker for redheads-- The Lovely and Talented has a gorgeous head of the stuff-- I appreciate their over representation in the comics.

Also over-represented in comics are blondes. Not just women, but men,  too. I remember coming to that realization in the '60s, when Steve Rogers, Clint Barton and Hank Pym were all on the Avengers at the same time, and all had exactly the same hair color. So did Thor, even though he wasn't Avenging at the time. Heck, even Quicksilver is technically a blond, albeit of the platinum variety.

If you were an alien who only knew us through our comic books, you'd have no idea that 90% of the world's  population has brown or black hair.