Where did all those wacky 'Doom Patrol' concepts come from? Comics, of course

July 16, 2020 — Watching Doom Patrol it might be hard to believe the bizarre characters on the screen actually first appeared in comic books. But it’s true, as we shall see with this stroll down Memory Lane.

* The Doom Patrol: The team — consisting of The Chief, Robotman, Elasti-Girl and Negative Man — first appeared in a book titled My Greatest Adventure from DC Comics in 1963. The DP sold well enough for the title to be re-named “Doom Patrol” six issues later.

The debate over whether this was a coincidence or a theft has raged for decades, but I tend to fall in the former camp. There are similarities, sure, and pretty specific ones. But creators in different places absorbing the same zeitgeist and coming up with similar ideas is hardly rare. Three months isn’t enough time for Stan Lee and Jack Kirby to have produced and published a fully developed comic book from scratch after Doom Patrol’s debut. Further, there’s just no evidence for theft. Finally, Stan and Jack — co-creators of most of Marvel’s most famous characters — really didn’t need to swipe from anyone.

But it sure is interesting!

* The Chief: Niles Caulder, the paraplegic polymath who leads the Doom Patrol, was revealed early on as the genius who saved the lives of Cliff Steele (Robotman), Rita Farr (Elasti-Girl) and Larry Trainor (Negative Man) after the bizarre accidents that nearly killed them.

Also, he mostly caused them, as seen on TV. That development was revealed in Grant Morrison’s run on the title, 1988-1993. In fact, most of the TV show is inspired by Morrison’s run, except the original four. 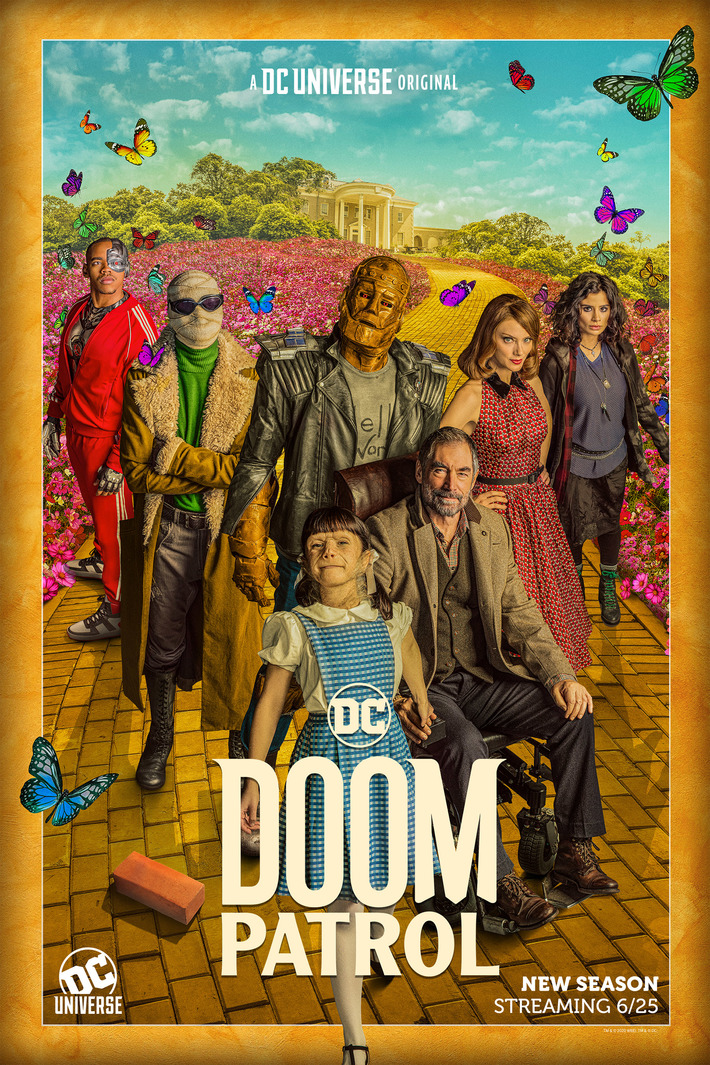 * Robotman: The heart and soul of the Doom Patrol has always been Cliff Steele, a former race car driver who lost his entire body in a car crash.  He has always been the everyman character serving as the reader’s point of view in this weird world.

Initially the character was called Automaton, before wiser heads prevailed.

* Elasti-Girl: Writer Arnold Drake initially had trouble with this character’s name as well, initially just calling her “Rita,” and “Elasti-Woman” a couple of times before settling on Elasti-Girl. (She has since become Elasti-Woman again.) Unlike on TV, Rita originally had full control of her powers, and the only drawback was that she would die young. Not so bad compared to Cliff and Larry.

The original Doom Patrol was actually killed off in an explosion in 1973, when faltering sales were going to end the title anyway. But one by one they started coming back, as superhero characters tend to do. The only team member where the ’73 death stuck was Rita, who was well and truly dead. But a 2009 story revealed that The Chief re-grew her from DNA in her skull, resulting in a new-ish Rita, without bones or internal organs, who turns into a puddle of goo when she sleeps.

* Negative Man: Initially Larry Trainor was a test pilot who was irradiated on the fringe of space, but continued to live somehow — with a mysterious radioactive being living inside him. Larry had to wear special full-body bandages created by The Chief to avoid giving everyone radiation poisoning, and the energy being could emerge from his body for only 60 seconds. That was plenty of time for the being, as it could move at the speed of light, fly, pass through non-lead walls, and so forth. Trainor, unfortunately, would pass out while the energy being was active … and die if it didn’t return in a minute.

Larry’s journey has been a weird one. At one point the energy being took up residence in a Russian cosmonaut named Valentina Vostok, leaving Larry weak and bed-ridden. In later versions, the energy being merges Larry with his doctor, Eleanor Poole, forming a intersex being named Rebis. Stilll later stories established that Larry is, in fact, the energy being — his body having been destroyed by the 1973 explosion, and The Chief constantly cloning him new ones for his radioactive-powered soul to inhabit.

So far the TV show hasn’t touched that one!

It should be noted that Larry wasn’t presented as gay in the comics, and the back story involving his wife and children is a TV invention. (Shrugs.) It works for me, given how, uh, fluid Larry’s past has been.

I also think it’s cool that the original four characters are presented as having actually lived in the late 1950s or early 1960s like their comics counterparts, with their aging retarded by various means. Seeing the original characters in their native habitat (in flashback) is a more powerful nostalgic rush than I expected.

* The “first” Doom Patrol: On TV, the current Doom Patrol discovered that a previous one existed, with most team members in some kind of mental institution. The characters revealed are a weird mix of DP comics history.

After the Doom Patrol died in 1973, Robotman was the first to return — his head casing had protected his brain and Dr. Will Magnus (creator of the Metal Men) built him a new body. A second Doom Patrol formed around him, including Joshua “Tempest” Clay, Arani “Celsius” Desai and Rhea “Lodestone” Jones. In the comics, they were pretty straightforward superhero types. On TV, they are the failed experiments of the first DP.

As for Steve “Mento” Dayton, he wasn’t a member of the second team in comics: He was a filthy rich hanger-on with the first team. He had invented a helmet that gave him psychokinesis and telepathy, and married Rita. Then the couple adopted Gar “Beast Boy” Logan, a green-skinned teen who could transform into any animal.

Oh, wait! I’m getting ahead of myself: *Beast Boy: Teenage Gar Logan was another hanger-on with the original Doom Patrol in the comics, barred from joining due to his age. He also occasionally guest starred in Teen Titans in the 1960s, and was a founding member of the 1980 version of the team.

Meanwhile he  isn’t even in Doom Patrol on TV! Instead we have Cyborg, I guess for diversity? Cyborg plays no role in Doom Patrol in the comics, having been a founding member of the 1980 version of the Teen Titans and the 2011 version of the Justice League. It’s kind of a demotion for him.

Meanwhile, Beast Boy appears on another DC Universe show, Titans. But Cyborg doesn’t, even though he should. (Sigh.)

* Danny the Street: A teleporting, cross-dressing, genderqueer, sentient street? Yep, that’s a Grant Morrison concept all right. First appeared in 1990, and has been with the DP off and on every since.

And yes, once he was so damaged he became a brick. TV got that one right. And, while he didn’t turn into a roadster in the comics like on TV, he is currently Danny the Ambulance.

* Crazy Jane: The TV version and the comics version (created by Grant Morrison in 1989) are virtually identical, so I don’t have much to add. I don’t think the reason Jane’s psyche is so fractured has been revealed yet on TV, and I don’t have the heart to reveal it, so you’ll just have to wait.

Fun Fact: Flex is based on the old Charles Atlas campaign that promised to “Make a Man out of Mac,” the skinny guy who got sand kicked in his face in comic book ads.

* Dorothy Spinner: Once again, TV has lifted the character almost intact from the comics. One exception: In the comics, she is not The Chief’s daughter—in fact, both characters have back stories newly invented for the TV show.

Not that any of this matters to enjoy the show. But it’s kinda cool to know, ain’t it?