Who Was Your Artist?

The "How Did You Get Into Comics?" thread made me think of a question I heard on a podcast earlier.

Who was the artist that you first recognized without having to look at the credits? You could recognize them by looking at their work; it was that visually striking to you.

On Infantino's art, I will always remember when he showed the city limits of Central City.

It was abruptly long grass (with bunnies?) and no buildings or roads at all.

Jack Kirby was easily the first whose name i knew, but i could probably recognize Curt Swan earlier without knowing his name, just from what i was exposed to first. There were a handful of artists with distinctive styles that caught my eye, but Time and i barely have a nodding acquaintance, so it's hard to keep any sort of order to who came first. Gil Kane, Steve Ditko, John Romita, Jim Aparo, Herge and Sheldon Meyer come to my addled mind for those early years..

Permalink Reply by Captain Comics on August 20, 2017 at 12:03am
Your mention of Herge reminds me that my brother used to check these enormous (to me) Tintin collections out of the library at Lincoln Jr. High in Mt. Prospect, Ill. In 1961 and read them to me. Herge was probably the first comic book artist I ever saw.

John Forte's work I recognized early on.  Since he drew so many of the stories that I still consider favorites (early LSH) I can't bring myself to knock his work too much; he may have been a much better inker than artist, although I've seen very few stories where he is the inker over someone else's pencils (Curt Swan. I think).

What I remember most about Forte was when he had several Legionnaires standing around, they'd all be shot from mid-distance from the knees up, standing stock still like mannequins, usually with one hand of each character holding his belt (for no reason). He had roughly three expressions (blank, angry, surprised) which, by their limitation, sometimes misled the Li'l Capn as to what was going on. And I found his women really unattractive.

I don't necessarily disagree but he could draw attractive women (at times) (from Adventure #317): 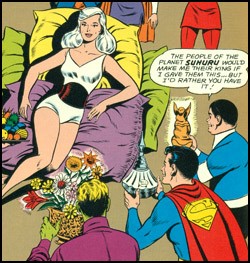 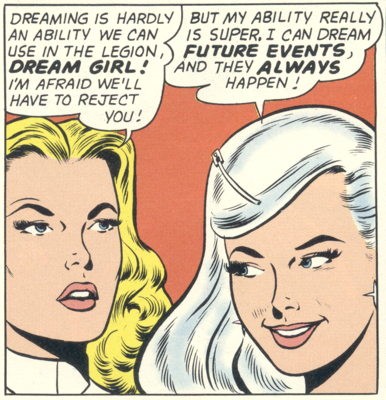 Wally Wood's style was one that I recognized early on, whether it was full art or just inking.

I thought of another artist whose style I recognized early on: Alfredo Alcala.

I remeber it well. I had been reading the adaptation of the first Planet of the Apes movie in the Marvel mag by George Tuska. Then, with issue #7, Alcala was given the assignment to adapt the second movie, Beneath the Planet of the Apes. BAM! Night and day. I've been able to spot his style ever since.

When I was studying acting one of the things I found a lot of people (including myself) have a problem with is what to do with their hands if they aren't being used for something else.  Many would frequently loop a thumb in  apcket or belt loop, but Stone Boy only has a belt.