Upon closer inspection (actually, a blog post pointed it out), WW has stars going down the sides of her legs. That's probably better than having a star-spangled butt. So that's taken care of. And maybe they'll rethink those boots before the show airs.

Here, in fact, is a fan version that darkens the blue color and makes the boots red. Both definite improvements.

Permalink Reply by Rich Steeves on March 20, 2011 at 4:24pm
I didn't like the hair and make-up, but I am waiting to judge the costume until I see it in action. I think of the still of Luke Skywalker from Star Wars. If I'd seen those shots before the flick, I think I would have been negative toward it...

I'd take it even darker.

Despite all the fans saying it should go that way, I think if the boots were red it would imbalance the whole look; the matching boots and pants give it a much more smooth flow to the eye.

Beyond that (and I may've said this in the other thread devoted to this image, I can't remember), I can't really form too much of an opinion, as this picture is completely devoid of context, and so nearly impossible to read how it will work in practice...

Hopefully the costume will be tweaked accordingly.

But it this the show that is supposed to have the title character in THREE different identities Amazon Princess/Ambassador/active super hero Wonder Woman; business woman Diana Themescyria (sp?), and plain Jane Diana Prince?

Or did it the plot get refined before getting the okay? And are they still just shooting a pilot movie or the actual series, and how many episodes has NBC committed to? Networks have a nasty habit of initially saying one thing and then doing another as ratings numbers develop.

The Twitter hashtag #wonderwoman has been running venomously against this. But, as one wag tweeted: "They've finally come up with a decent Wonder Woman costume -- you can tell, because fans hate it."

For my part, I'd prefer red boots, too, and I think the little W's at the top of the boots are a bit much. Also, as a female Twitterer said to me, "the boobs seem a bit too unrestrained." I take her point; it's hard to imagine her taking a swing at anyone and staying, um, restrained. And, frankly, imagine that red bodice, and the girdle, and then plain blue jeans and black riding boots below the waist. Man, that works for me.

But, you know, I find that's just nitpicking and I really don't care. I'm really much more concerned about the story and characterization sucking, which would put a stake in the character on the screen for another generation. And, hey, I'm not getting any younger! So, you know, fingers crossed.

One more thing: The consensus of opinion online is that this is just a photoshop job, and the costume doesn't exist yet (and the young lady's assets may have been a bit enhanced). So we may all be jumping the gun.

I didn't realize there was already a thread on WW when I posted this; I didn't think to look down in TV, where it rightfully would go, and it got pretty well buried quickly in any event. I'll try not to duplicate efforts in the future. 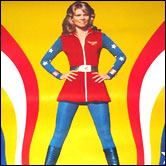 I agree with Cap; the costume looks good enough. I'm more concerned with how good the show will be. If it's good, the costume won't matter, and if it's not, the costume isn't going to hurt it. I am surprised at how virulent the dislike is for it; I've seen a lot worse, and yeah, I'm thinking of Cathy Crosby:

The new costume, as shown in the image, is based on her look in the current series. When it was introduced I though the creators wanted to get away from a sexualised look, but it may be the new look was connected to the TV show's being in the works.

Permalink Reply by Jeff of Earth-J on March 21, 2011 at 10:28am
Despite all the fans saying it should go that way, I think if the boots were red it would imbalance the whole look; the matching boots and pants give it a much more smooth flow to the eye.

That's my thought as well.

I think the little W's at the top of the boots are a bit much.

E! Online asks Lynda Carter for her thoughts: "Wonder Woman: What Does the Original Think of the New Gal?"

"You know, I'm very sensitive to the fact that she will be compared," Carter said. "There's no getting around it. It is what it is. I would hope that people would cut her some slack.

"I'm sure there will be people who say she looks better than me and like her better than me—and that's also fine," she continued. "I want this story to be told again. I'm really excited. I can't wait to see it."

Is that gracious or what? Lynda Carter has been really, really cool about the whole thing.

Lynda Carter will always be my Wonder Woman!

As for the new series, it seems odd to argue over something we haven't seen. This may or may not be the final costume. This new girl, Adrianne, is obviously attractive and sexy. If she can act, I have no direct knowledge of but she will be a different Wonder Woman and that's a good thing. We must wait and see if we like this new TV version.

Permalink Reply by Jeff of Earth-J on March 21, 2011 at 12:27pm
The new costume does not look dissimilar (except for the brighter colors) to the one currently being sported by Wonder Woman in the JMS issues.