But for something a little more mainstream: I tended to like annuals that were either linked by a strong common theme or had solid stand alone stories.

I enjoyed quite a few of the Elseworld annuals, including the two Jason mentioned:

As for stand alone annuals, a few that come to mind are:

Marvel Two-In-One Annual #7 which had a fun story whose consequences lead into another great issue of the regular series.

and the first couple of Legion annuals after Giffen took over

I really thought they made lemon aid out of the continuity mess the Crisis and Byrne handed them.

The 1998 Fantastic Four Annual had a wonderful story written by Karl Kesel and drawn by Stuart Immonen. I still buy it any time I see it in a back issue bin. It featured Ben Grimm and his relationship to the rest of the crew, being the only one that isn't actually related. Of course, this overarching theme is embedded in a great science fiction story of time travel and humorous wordplay (which is what I love about Kesel's writing). 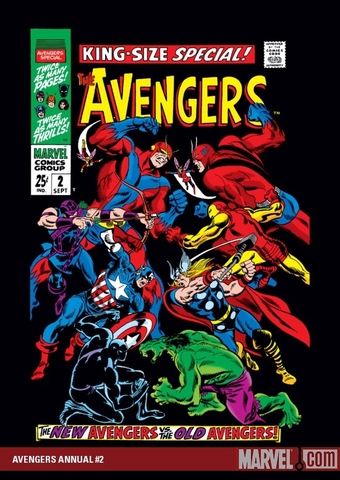 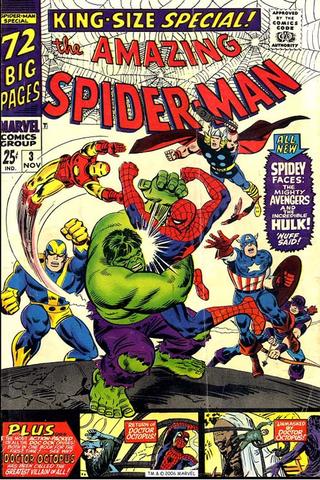 I grew up wondering what happened in that Avengers Annual, and was very disappeointed in the 80s when I finally found a copy and saw the ending.

The changes made in this cover (which contributed to Steranko leaving Marvel) made no sense because the original version appeared in all of the comics that month in an ad with the Avengers Annual. 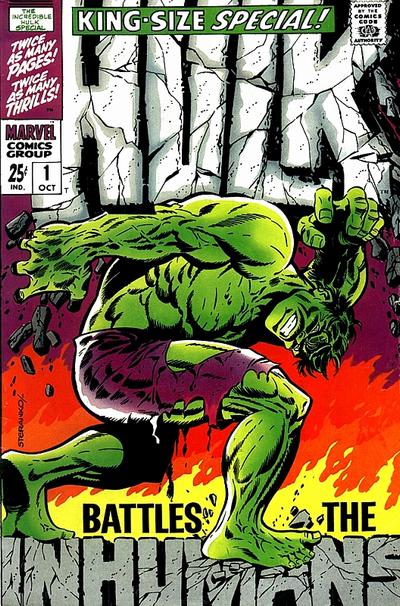 I'll try to find the ad, but my comics are horribly unorganized.

Anybody have any ideas or guesses about why they might have started calling their annuals "King-Size Specials" instead of Annuals?

Even though it was all reprints (Avengers#5 and #6) it was all new to me, and was my favorite annual as a kid. Lost the first copy somewhere in the 70s, and when I found a poor copy with a piece of tape on the cover in the 80s I grabbed it. 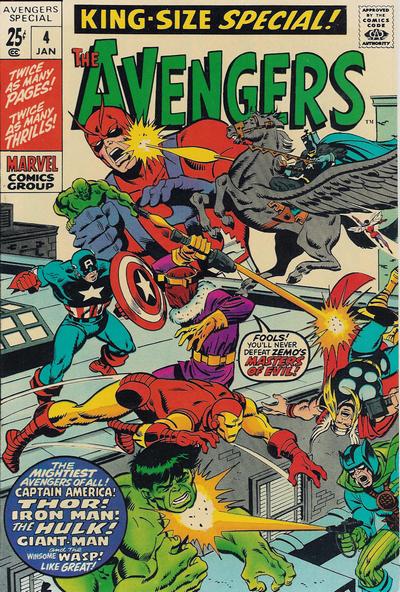 While the cover scene of the Hulk fighting the Melter is misleading (the Hulk isn't in the Masters of Evil issue) it makes it look like the Hulk was still part of the team. Perhaps scenes like this influenced the people in animation that kept the Hulk in the show long after he should have leaped away and ran into Namor.

If I remmeber this one, without looking it up, wasn't there some Steve Ditko artwork - which i never understood - if he fell out so seriously with Stan , how come Ditko ever came back for hire? What I've wondered is why he felt he could draw characters like Hulk and Iron Man, which he had drawn back in those days (he was even the one that first got Iron Man out of that clunky old grey suit)) when whatever it was that happened took place, but continued to have nothing to do with Spider-Man and Dr. Strange.

Notice the 4th Avengers Annual not only lists the Hulk as an Avenger (even though he's an enemy that appears for only a few pages and only saves the day because they trick him into helping them), he gets billing above Giant-Man and the Wasp. Were they still thinking about putting him back on the team? The cover date is ten months before he joins the Defenders, and 17 months before he'll help his old team out in Avengers#100.

My favourite and I even wrote in to Marvel about this although nothing became of it was what I referred to as Doom War. It was back when Englehart was writing Fantastic Four among other things and there was the ongoing story of Doom versus Kristoff as to who was really Doom.

The idea came to me around when the grey Hulk had his fight with The Thing who was stronger at that point (FF # 320 I think). Doom helped Hulk to ambush The Thing but he was going to want a favour. It occurred to me that a knockdown dragout between the 2 Dooms who have a great ripple effect and both would be able to coerce or manipulate a variety of heroes in schemes that would have done Thanos proud. A lot would have definitely been unwilling but still end up having to pick a side and then have a final annual where the whole thing would have come to a head. Instead about a dozen issues later, Marvel wanted a reset to the default setting of how the FF is run and not too long after that, I stopped seeing any comic stories by Englehart. Ah, but what COULD have been!

The Doom vs. Kristoff dragged on and on and seemed like it was going to continue for years. The way it was ended seemed very abrupt and anti-climatic. Like a new writer was coming onto the title and said he wanted that subplot gone because he had his own ideas. Like the mindless Hulk trapped in another dimension was ended without warning in Alpha Flight because John Byrne said he wanted to take over the series, but only if they got him out of there. Then he made one story separating Hulk and Banner, had a bunch of superheroes attack the Hulk, then suddenly quit, apparently because Marvel wouldn't give him everything he wanted. I read Englehart got kicked out after trying to pair the Silver Surver with Mantis. Somebody in charge hated her and wanted her gone for good.

Might be interesting to have a thread on comics that might have been. I know I'd've loved to see the Dr. Strange Undying Ones story end just about any way than the way it did. I remember someone in CBG years ago asked people to send in their dream creative teams on different Marvel titles.

This is one of my oldest, most favorite comics. I just love how John Buscema makes The Hulk look so ape-like.

Travis Herrick (Modular Mod) replied to ClarkKent_DC's discussion R.I.P. Tom Palmer
"Aw, man, that's too bad. He was one of the first inkers, I recognized. It was always a…"
14 minutes ago

Lee Houston, Junior replied to Steve W's discussion A Cover a Day
"Time for more excitement in the "fun" house. (Image courtesy of the Grand Comics…"
38 minutes ago

Jeff of Earth-J replied to Jeff of Earth-J's discussion Sandman (TV)
""They make changes for all kinds of reasons..." The combination of issues #9 and #13 into…"
1 hour ago

Jeff of Earth-J replied to ClarkKent_DC's discussion R.I.P. Tom Palmer
"Well shit. First Neal Adams and now Tom Palmer. There is no one whose pencils Tom Palmer could not…"
2 hours ago

Richard Willis replied to Jeff of Earth-J's discussion Sandman (TV)
"Jeff of Earth-J said: ...... some photos of the guy playing Dream but he didn't look…"
2 hours ago

Randy Jackson replied to Randy Jackson's discussion The List of Superhuman Characters who Can Split into multiple versions of themselves or multiple physical people
"Eclipso,  The Spectre and Composite Superman are good  Captain Marvel(Xam) doesn't…"
4 hours ago

Randy Jackson replied to Randy Jackson's discussion The List of Superhuman Characters who Merge Together
"Sounds like Robby Reed belongs on the list of characters who split. The others are good and will be…"
4 hours ago