April 16, 2020 — Roughly every 20 years, Zombie Chicken Little rises from his grave and predicts the end of the comic book industry. The last time was in the late ‘90s, sooo …  yep, here he comes, shambling along right on schedule.

And, honestly, he could be right this time. A few weeks ago, Diamond Comic Distributors Inc.—which has a virtual monopoly on distributing comic books in North America — announced it would stop distributing to retailers all material scheduled for April and beyond, and directed printers not to send it any new shipments.

That was unwelcome news to virtually everyone. Retailers need the product to keep income flowing, even if it has to be delivered by drivers in hazmat suits and sold to customers at the curb. And publishers have product ready that’s been written, drawn, printed and, most importantly, paid for.

But Diamond, the middleman, simply shut off the tap on March 23.  And then told the publishers it wasn’t going to pay them for the product it had already received, either. And then stuck out its tongue.

OK, I made up that last part. But Diamond wouldn’t burn all of its business partners if it didn’t have good reason (and it eventually backed down on the cessation-of-payment bit). We can assume it wasn’t ready for an abrupt and prolonged shutdown of the entire country. In fact, recently it began furloughing employees, which is another bad sign.

So yikes! But worse, if Diamond wasn’t ready for this, imagine how the shutdown is impacting your local mom & pop comic book shop. Many comic stores run on very narrow profit margins. Many are in debt already. And with digital comics waiting in the wings to replace its print counterpart (as has happened in virtually every other print industry), could enough shops close to bring an end to the era of print comic books?

My answer, after a great deal of thought, and after consultation with my closest advisors, is … reply hazy, try again. In fact, let me go out on a limb and say … ask again later.

OK, you’ve caught me, I’m using a Magic 8-Ball. Because, honestly, no one can say for sure one way or the other. Circumstances  are truly dire. But then again, they have been before.

Back in the late 1940s and early ‘50s, comic books were selling like … well, things that sell really well. According to comics historian David Hadju’s Ten-Cent Plague, 80-100 million comics sold every month in 1948 America. Comic books like Crime Does Not Pay were blamed for juvenile delinquency in the early 1950s, almost leading to the extinction of the industry. (Cover art by Charles Biro, courtesy Dark Horse)

And among the best-sellers, nestled amid the jungle heroes and spacemen and teen humor books, were comics featuring gory horror stories and bloody “true” crime stories. Which caused a ruckus.

The dreaded triple-P — parents, preachers and prosecutors — found a scapegoat for every societal ill in the pages of Tales from the Crypt and “Crime Does Not Pay.” Magazine articles were written excoriating comics, speeches were made condemning the funnybook menace,  comics were burned in church parking lot bonfires. A noted New York psychiatrist (another P!) wrote a book titled Seduction of the Innocent which made the case that all juvenile delinquency was caused by comic books. Comic book publishers were even pulled before the United States Senate Subcommittee on Juvenile Delinquency to explain their iniquity.

Terrified, the publishers banded together to self-censor. The result was the Comics Code of 1954, a puritanical document so draconian that it instantly reduced all comic books to a level so boring even children thought they were beneath their intelligence.

Which was bad enough. But there was another supervillain on the horizon: that newfangled contraption called the television.

Bedeviled from without and within, publishers dropped like flies. Artists and writers fled to other fields. Sales dropped off a cliff. And up arose Chicken Little with his first prediction that the sky was falling on comic books.

But the publishers, after a few years trying to write interesting stories where nothing bad was allowed to happen, came up with some ingenious workarounds. In the late 1950s, DC Comics re-created their 1940s superheroes in sleek, new, science fiction drag. And in the early 1960s, Marvel Comics — which wasn’t called that yet — also landed on the superhero genre, but focused on characterization and human interest. Both approaches, buoyed by some truly impressive talent, saved the industry.

For 20 years. Then Zombie Chicken Little arrived again. And this time, comics were doomed for sure!

In the late 1970s, the traditional method of distributing comic books was drying up. Comics were stocked in drug stores, grocery stores and five-and-dimes the same way magazines were: The distributor would show up once a week, put the new periodicals out, and take the unsold ones away — which were sent back to the publisher for a refund.

It’s a terribly inefficient way to deliver a product, with returns often amounting to half a periodical’s print run. That’s a lot of wasted effort shipping the books back and forth. Not to mention the waste in unsold paper.

Worse than that, though, was that comic books were becoming unprofitable for the distributor. Back when comics began, they and magazines sold for the same price — 10 cents.  But as the years flew by, inflation forced magazines to up their price … while comic books, fearing they would lose the kiddie market, kept the price down and cut pages instead. By the late 1970s, comics were down to a flimsy 20 pages that sold for pocket change, while magazines were bigger and shinier and cost more.

And, unfortunately, made a much bigger profit margin for the distributors. Who started leaving comics on the docks, undistributed. Why work hard to realize a few cents per comic book, when for the same effort you’d make 10 times the profit on a magazine?

Comic book sales fell off another cliff. And Chicken Little, dead for 20 years, arose from the grave. Comics were doomed! Again!

Until a retailer named Phil Seuling came up with the idea of the “direct market.” In this scheme, publishers could ditch the inefficient magazine distribution method and sell comic books directly to retailers. Not only would they cut out the middleman, but it meant the end of returns — retailers would agree to keep all the books they ordered, and the publishers would agree to a lower wholesale price.

And lo, the comic book store was born. Once again, ingenuity came to the rescue.

For another 20 years, that is. What went wrong in the late ‘90s was a host of problems that all came to roost at the same time, a perfect storm that drove mighty Marvel Comics into bankruptcy in 1996. If you ever wondered why Universal owns distribution rights to the Hulk, and Sony has its clutches on Spider-Man, this is the reason. A drowning Marvel sold off its movie/TV assets to stay afloat. Meanwhile, Marvel was pulling down the whole industry.

Chicken Little arose once more from his crypt, his atrophied voice croaking out his dismal warning. Comics were doomed! 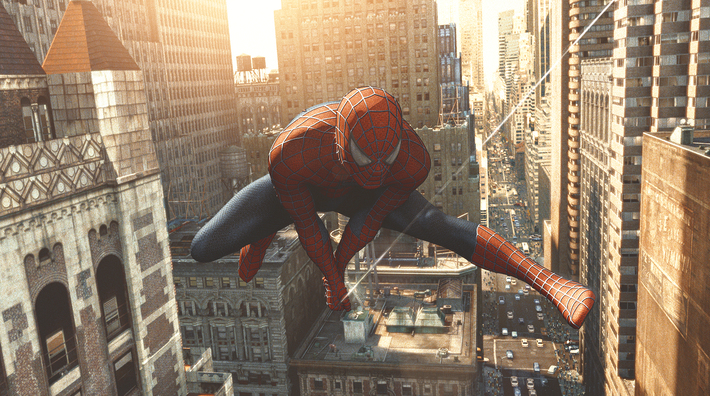 When the Spider-Man movies starring Tobey Maguire started making big money, Marvel Comics launched its own film studio, which has premiered one hit after another. (Copyright Sony Pictures)

Except they weren’t. The fire sale kept Marvel afloat for a few years —which turned out to be all it needed. Because all those assets they sold off started to make money! For other people, sure, but real money! Blade (1998), X-Men (2000) and Spider-Man (2002) were enormously popular. Despite having sold off its crown jewels, Marvel realized it was still sitting on a gold mine. It started its own studio in 2005, and three years later launched a B-list character named “Iron Man” onto the silver screen. The rest everyone knows.

And now both major comics companies are nestled safely in the protective bosom of huge corporations — Marvel at Disney, DC at WarnerMedia — who transform the publishers’ IP into big bucks.  The future seemed assured …

… until the pandemic. And you-know-who is now stalking the land, predicting doom.

So, you know, business as usual.

“And, honestly, he could be right this time.”

“I might regenerate. I don’t know. Feels different this time…” – The Fifth Doctor’s last words

“Diamond Comic Distributors Inc.— announced it would stop distributing to retailers all material scheduled for April and beyond…”

Oh, I hadn’t heard the “and beyond” bit.

“Terrified, the publishers banded together to self-censor.”

Or, as I believe, they banded together to drive their biggest competitor out of business.

Agreed on the EC score. I tend to believe that driving EC out of business was part of the motivation to create the Code (it was obviously an opportunity to do so), and almost certainly contributed to the final form of the Code. (The targeting of "terror," "horror," "crime" and "weird" on covers took out half of EC's line.) Some people disagree, and since we'll never know, they could be correct. But the Code seems so targeted at EC that I feel the preponderance of evidence supports our theory.

A Guardian article on this subject. The headline doesn't do the article justice. There is new information in it, at least to me.

Richard Willis replied to The Baron's discussion Movies I Have Seen Lately
"Satan's Triangle (1975) I saw this when it was originally on TV as a movie of the week. It was…"
48 minutes ago

Richard Willis replied to Steve W's discussion A Cover a Day
"Jack Knight and his father Ted Knight, the original Starman (and of course The Shade)"
1 hour ago

Lee Houston, Junior replied to Steve W's discussion A Cover a Day
"Busy day on the medical front (don't worry, I'm all right. Just a couple of different…"
5 hours ago

The Baron replied to Steve W's discussion A Cover a Day
"Asuka and her mother, Kyoko, in one of their happier "elseworlds""
11 hours ago

Steve W replied to Steve W's discussion A Cover a Day
"When you're a parent, sometimes you have to be cruel to be kind, but to take your son's…"
11 hours ago

Jeff of Earth-J replied to Wandering Sensei: Moderator Man's discussion What Comic Books Have You Read Today?
""I'm pretty sure Robots was your Pick of the Week!" Found it. (It was just waiting…"
12 hours ago

Rob Staeger (Grodd Mod) replied to Wandering Sensei: Moderator Man's discussion What Comic Books Have You Read Today?
"Planet of the Nerds was the first time I'd seen Robinson's art, I think -- his name…"
12 hours ago

JD DeLuzio replied to Steve W's discussion A Cover a Day
"How strange... Kryptonian women wear bridal gowns that look exactly like the ones worn in Western…"
12 hours ago

Jeff of Earth-J replied to Steve W's discussion A Cover a Day
"I would say it's up to the poster of the image(s). "
12 hours ago

Richard Willis replied to Steve W's discussion A Cover a Day
"Peter Wrexham said: Sep 2022 Classrooms?? I share Jeff's concern that there might not be…"
12 hours ago