Oct. 29, 2013 -- There’s been a rash of good, scary books in the comics world, and the spooky season gives us an excuse to talk about them. 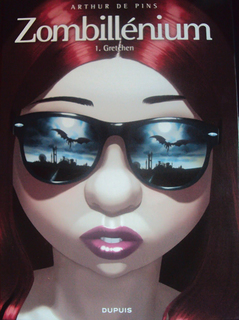 At the top of my list is Zombillenium (NBM, $14.99), more a spoof of horror stories than a genuine chiller. But there’s an intriguing narrative at the heart of it, making one hunger … not for blood, but for more story.

The premise of Zombillenium is an amusement park of the same name run entirely by vampires, werewolves, zombies and the like, unbeknownst to the patrons or general public. When a loser named Aurelion is accidentally killed by a vampire and a werewolf (in a car accident, of all things), they attempt to erase the evidence by biting the victim. The combination of bites turn the ordinary guy into something extraordinary, who – seeing no other course – joins the amusement park staff.

This is where things really take a really interesting turn. Have you ever noticed how many action movies seem to follow the same general script? The same is true for comics, which have their own patterns and cliches. But Zombillenium eschews the common paths – instead of following the human victim as the reader’s point of view, as I expected, the book instead shifts focus to a homely young witch named Gretchen. She feels responsible for the newbie (she set the events in motion that led to the auto accident), and there are hints of romance in the air as well.

Zombillenium is the work of a young French artist named Arthur de Pins, whose prior work has mostly been off-color cartoons for the French magazine “Fluide Glacial” and in animation. His work – Franco-Belgian style, drawn entirely on Adobe Illustrator – is fluid, graceful and clear, and is shown to good effect by the book’s oversize (9x12) format.

Revelations at the end of the book take the story in entirely new directions, which I won’t spoil here. But Zombillenium refuses to follow previously set patterns, and I can’t wait to see where de Pins takes us next. 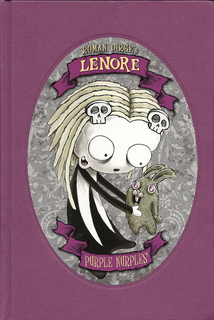 Another black comedy comes to us in the form of the fifth collection starring “everyone’s favorite cute little dead girl.” That’s the tagline for Lenore: Purple Nurples ($17.95, Titan Books), about a little girl (technically a zombie, I suppose) who died 100 years ago and has lived (un-lived?) ever since in a crumbling house deep in an enchanted forest with her two companions, a vampire ragamuffin doll and an undersized demon who wears a Halloween candy bag on his head.

That summary really doesn’t suggest the charm and lunatic imagination of Lenore, which leaps from ancient Indian cursed frog beasts (that eat eyeballs and hollows people out to wear their skin as a hat) to the creeping Creepig (the embodiment of pork gluttony) to the revelation of Lenore’s nose (a dead roach that she claims, improbably, gives her Roach Senses). That all sounds pretty awful, really, but in the hands of writer/artist Roman Dirge it’s silly fun in “The Addams Family” vein.

Finally, Abrams’ SelfMadeHero has released its fourth volume adapting to comics form the works of H.P. Lovecraft, The Shadow Out of Time ($19.95).

I was never a big Lovecraft fan growing up, despite loving most horror, science fiction and fantasy in almost any form, and this story demonstrates why. Lovecraft’s stories were often horror stories more on a psychological or visceral level than a physical one; and sometimes – as in this story – almost nothing “happens” at all. Instead, the characters experience terror internally, with suggestions of terrible things just outside the field of vision, or loss of personal identity or memory, the onset of madness and other psychological horrors. 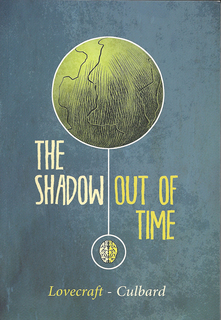 And, frankly, that didn’t scare me much as a kid, and made me think Lovecraft’s protagonists were kinda wimpy. Plus, I found Lovecraft’s writing style overly wordy and stiff.

These faults, as I saw them, were not only manifest but virtually the entirety of Lovecraft’s final long-form story, The Shadow Out of Time. I read it at 15 or so, and was utterly bored by it.

But, happily, the graphic-novel medium cures my disdain almost by definition.

For example, the nameless, shapeless worries of the narrator that are disappointingly vague in prose are brought to horrible, vital life by writer/artist I.N.J. Culbard. The wordiness I disliked is gone as well, since a graphic novel requires that verbiage that doesn’t advance the story be kept to a minimum, and Culbard obliges with a spare narrative that hurtles urgently forward.

Finally, that narrative is one that encapsulates the themes that dominate Lovecraft’s oeuvre. The protagonist has lost five years of his life, in which he feels that his consciousness was housed elsewhere while an alien being used his body. No one believes this, including the narrator, who feels he may have gone insane. But his quest to find out what happened to him in those five years instead suggests the encroachment of powerful, terrifying alien forces just under the surface of our perception that undercut the importance of man in the universal design. Plus, they’re really scary.

So if this Halloween you aren’t sufficiently disturbed by the little goblins that arrive at your door extorting sugary ransom, pick up a couple of these graphic novels. The timing of their release just couldn’t be better.

Permalink Reply by Tracy of Moon-T on November 10, 2013 at 9:20am
I am definitely interested in reading these. Thanks Cap!

You'll have to let me know which one(s) you want, because none of them sound particularly interesting to me.

I'll have to keep an eye out for Zombillenium -- the description of the premise didn't grab me so much, but your promise that it doesn't go down well-trod paths is intriguing. And NBM is a publisher I want to see more from.

Glad this story allowed you to enjoy Lovecraft on some level, Cap.  I've read all the stories and love his work and the incredible originality of what he created - a whole mythos. But this one must have faded from my memory.  The plot sounds wonderful. Very creepy and psychological.  I think Lovecraft was an atheist with no real belief in ghosts and ghouls and evil otherworldly beings, so I guess he was more interested exploring psychological stuff, madness etc.