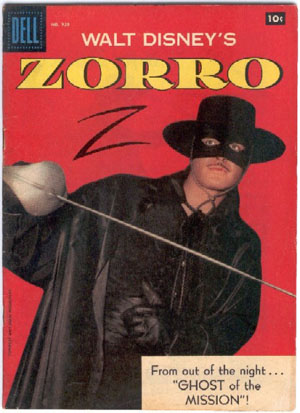 I've been watching Disney's Zorro every morning on Cozi-TV and have gotten quite addicted to it as it is a serialized adventure. These are colorized from 1992.

Guy Williams (Lost In Space) is suave and charismatic as Zorro and Don Diego Della Vega. His Diego persona is supposed to be cowardly and foppish but he is far wittier than that. Also he is usually the tallest person in any scene he's in.

He has to deal with the disappointment his father has in his apparent inaction. That's something most heroes don't have to deal with, except for Thor!

His relationship with Bernardo, his mute servant who pretends to be deaf, is endearing.

Henry Calvin plays Sgt. Garcia as comic relief who must capture Zorro but soon realizes the good he does. He can also be quite formidable when need be. He also appeared on The Dick Van Dyke Show doing a great Oliver Hardy to Dick's Stan Laurel.

Zorro was a merchandising blitz for Disney who learned their lesson from Davy Crockett.

Due to ownership issues, Zorro lasted only two seasons. But Guy Williams went to South America in the 1970s to huge fanfare, performing in a circus as the Fox!

Usually the great pre-Superman heroes include the Shadow, Doc Savage, The Phantom, Dick Tracy and Flash Gordon but I think that Zorro belongs to their ranks.

One of the all-time great theme songs!

I tried watching it a few times but the episodes weren't in the right order and that's crucial for a serial.

We went to see a Zorro movie when I was a little kid. The only bit I remember is the villain discovering Zorro's secret passageway near the climax. I think it was the 1974 TV version of The Mark of Zorro with Frank Langella. Ricardo Montalban played Captain Esteban and Gilbert Roland Zorro's father.

The 1940 The Mark of Zorro, with Tyrone Power, is great fun. Basil Rathbone played Esteban and he and Power have a furious swordfight just ahead of the climax.

When Disney did the TV series Dell published tie-in comics, some of which were drawn by Alex Toth. But it had already done Zorro comics as part of its Four Color series, going back to 1949.

I remember seeing episode one of the Guy Williams show with some Disney movie back in the 70s. Must have been an experiment the theater tried that didn't work, since they never ran any other episodes of that or any other series with their movies.

I watched two episodes a while back just because I saw in the listings that Annette Funicello was a guest star.

I never saw the TV show (only brief clips) but I would like to. I have two volumes of Dell Zorro comics (one featuring Alex Toth) published by Hermes Press.

My family and I watched the Zorro TV shows when then were originally shown, and I bought several of the Dell comics, which I no longer have. I watched an episode some time in the last year or so and it holds up pretty well. Guy Williams will always be Zorro to me.

Marvel did a series in 1990-91, and Topps did one written by Don McGregor in the mid-90s. I haven't read either. After the Antonio Banderas movie came out there was a newspaper strip by McGregor and Tom Yeates. I read the latter part of the run; I fear it lacked charm and was slow-moving. McGregor continued his storyline in Zorro digest comics he wrote for Papercutz, drawn by Sidney Lima, which I liked a bit more. Zorro and Eulalia travelled away from Spanish territory to other parts of what is today the United States, such as Yellowstone National Park.

The swordfight at the climax of the 1975 Zorro, with Alain Delon, is immensely long; about nine and a half minutes. Stanley Baker played the villain.

The IMDB tells me there was also a 1975 Indian version, set in India, starring Navin Nischol.

Comic Book Plus has some Spanish language Zorro comics.

For those who are interested, this article talks about the old Los Angeles which was the setting for the Zorro stories. A historic area has been preserved near what is now the downtown area:

Guy Williams will always be Zorro to me.

Amen! That's why I have never even bothered to look at another Zorro production.

But beyond the fact that Williams put a lock on that character, the Disney series was expensively produced, presented excellently written scripts, and did something rare for action-adventure-type programmes of the era:  it developed layered, multi-dimensional characters.  Moreover, the situations and relationships did not remain static, but developed and evolved over the two seasons the show ran.

That's why I wouldn't have watched the new Lone Ranger even if Tonto hadn't been wearing a bird on his head.

I noticed from the few episodes I saw that the initial villain was gone and the fat sergeant was in charge. Interesting but without seeing that first storyline from beginning to end I just couldn't get into the series.

I think the Green Hornet also had to deal with his father being unhappy with how he was living his life at first, but later versions of the series wrote him out of the story, which I think took away too much from the character.

I vaguely remember not reading the Topps series because I thought having a Lady Zorro lessened the main character. Batman isn't that special if other people are running around in bat costumes too.