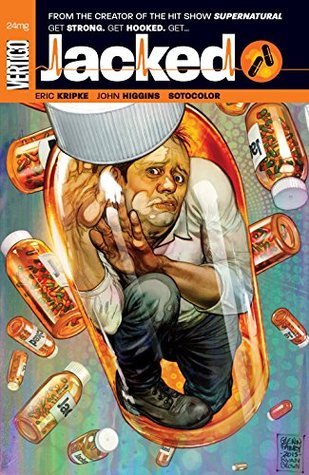 For writer Eric Kripke (creator of the TV series Supernatural) this was his writing debut for comics. But he had two of Vertigo's old hands on art: John Higgins (Hellblazer) and Glenn Fabry (Preacher) on cover art. Protagonist Josh Jaffe is a middle aged man in the midst of a mid-life crisis, out of shape and unemployed (in his Foreward Kripke reveals the autobiographical basis for the story, describing it as the most personal thing he has ever written, or is likely to). Josh is willing to try anything to change his life, so he buys a "smart pill" called Jacked over the Internet without knowing much about it.

At first nothing seems to happen; then he starts hallucinating while on an outing with his son. But the real shocker comes when he rescues a man from a car crash by ripping a door off the hinges and carrying him to safety over his shoulder (thinking "my back feels great," despite his former back trouble).  Clearly the effects of the drug have gone far beyond just stimulating his brain. He makes a call to the drug inventor's help line, but while waiting for an answer he can't help but keep taking Jacked. When he goes next door to confront a neighbor things get way out of hand. It turns out the man is a drug dealer, and putting him in the hospital is going to complicate his life.

In short, becoming a real life superhero is messy and complicated. Stopping regular doses of Jacked causes painful withdrawal symptoms, so that's not an option. Even after breaking Jacked's inventor out of prison Josh eventually runs out of pills. Just in time to save his family from the drug kingpin who is holding his family hostage--which he accomplishes with a clever plan and no superpowers. Josh and his family live happily ever after, and there is a little twist at the end that makes the Jacked story open ended. There could be a sequel, although there is no indication that one is planned.

This miniseries has a classic Vertigo feel to it, not least due to the familiar look of the art. It was great to see Higgins and Fabry in action. Kripke writes about his appreciation for the difficulty of crafting comics--implying that this may be his only attempt--but that would be a shame. I'd certainly like to read more comics created by him.