From comics to crime noir: Archie's Alex Segura brings his Miami P.I. back in 'Dangerous Ends'

From Batista’s Cuba to modern Florida. From street gangs to dirty cops. From Miami’s upscale neighborhoods to its dirtiest back alleys. From seedy bars to AA meetings.

All those spans describe Dangerous Ends, the third novel about Pete Fernandez, a modern P.I. with a drinking problem and a knack for getting into trouble.

There’s one more span to consider: “from comics to crime noir novelist.” That describes Alex Segura, the creator of Pete Fernandez and author of Silent City, Down the Darkest Street and now Dangerous Ends.

And just as Fernandez covers a lot of ground in the novel, Segura does the same at his “day job” at Archie Comics. He’s the Senior Vice President – Publicity and Marketing, talking up the publisher’s comics and TV efforts. He’s Editor, Dark Circle Comics, overseeing Archie’s superhero line for mature readers. And he even writes a few comics now and then, including a story titled “Occupy Riverdale” and the recent Archie Meets The Ramones. 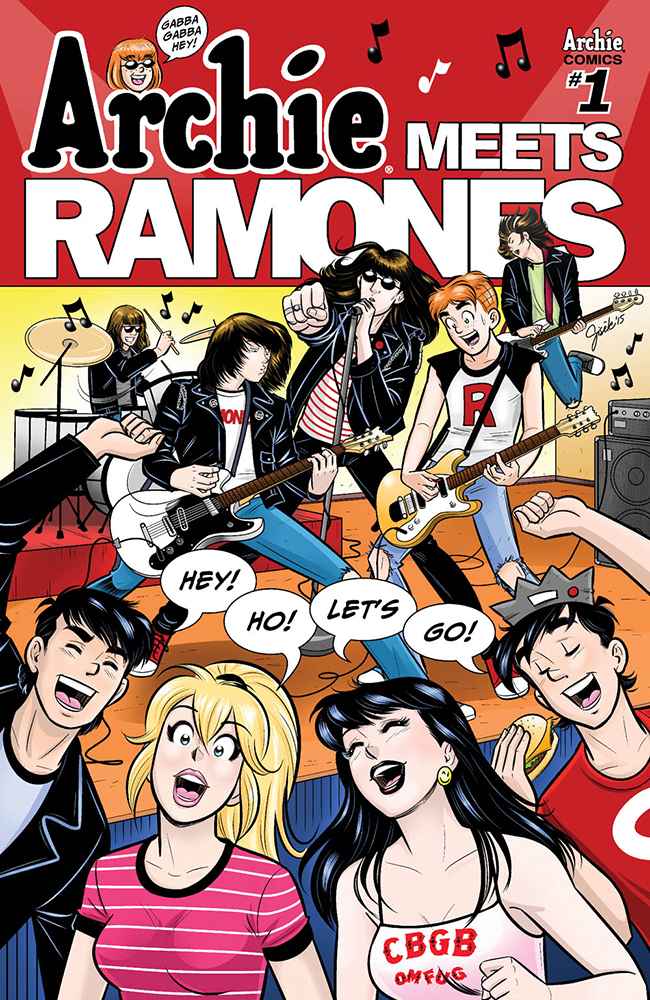 But, while Archie Comics is located in New York, Segura is from Miami – which is where he sets his Fernandez books. In an interview, I asked him how much of his childhood makes it into Dangerous Ends.

“Oh, a lot of it,” he said. “I spent 20 or so years in Miami, from childhood to young adulthood, so there’s a lot of ground to cover. Mostly, I reference restaurants, bars or neighborhoods from when I lived there. Some spots have closed, so I allow myself a bit of creative license to reopen them for the purposes of Pete’s adventures. I spent a lot of my time growing up in Miami in the suburbs and outer areas, so you see a lot of that in the book. I wanted to show that Miami was a much more sprawling and big city, in contrast to Manhattan, which is much denser.”

Which, it turns out, means a greater variety of locations than your typical, New York-based crime noir.

“Miami is a really big, complex place – with beautiful beaches and crime-riddled stretches. It’s a tropical paradise that also boasts a really gritty, dark side, and I wanted to bring people into the parts of the town that they might not see. It’s by no means a definitive or comprehensive tour of the city, but it’s the parts of it that still linger with me, years after moving away.”

Which is worrisome, given that Dangerous Ends includes a copy accused of the gory murder of his wife, and a lethal, pro-Castro street gang called Los Enfermos.

“We were always aware of crime – either from what we saw on the news or experienced in our life,” Segura said. “I didn’t live in a particularly ‘bad’ neighborhood – it was pretty quiet and suburban. But there were always kids trying to act tough or make it seem like they had gang ties or were more dangerous than they seemed. The idea behind Los Enfermos was partially informed by the gangs that cropped up in Miami during the ‘80s, around the time of the ‘Cocaine Cowboys’ when drugs were funneling into the city and it was a much more unstable place. I wanted to add a political element to the gang, too, so that’s where the pro-Castro element came from. Hiring Miami gangsters to kill for money seemed like something Castro and his brother would do.” 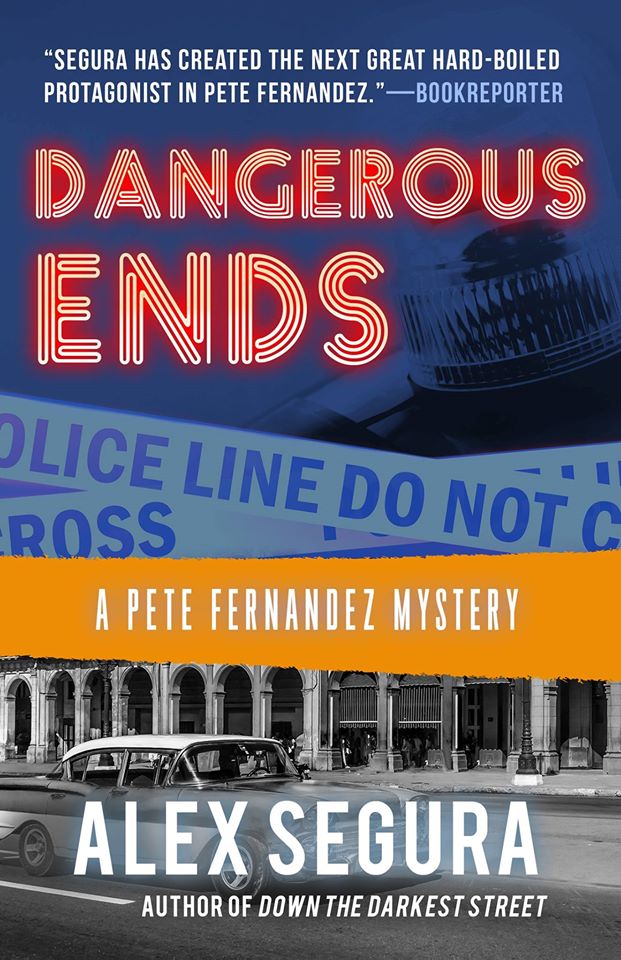 Meanwhile, the characters in Dangerous Ends, while invented, may also have a touch of Segura’s childhood friends and family.

“Pete reminds me of people I knew growing up, or went to school with,” he said. “In Miami, I had a lot of friends with similar backgrounds – Cuban-American, suburban, public school kids. I wanted a detective that represented that group. I also wanted him to grow into the role, as opposed to appearing on the page fully formed and at his peak in terms of being a detective. I joke that he’s someone I knew in college but lost touch with. I’m glad to see he’s doing better.”

And Fernandez is doing better than in the last two novels, at least at the beginning of Dangerous Ends. Not that things ever go well for Fernandez for long.

“I wanted to show that Pete had improved, at least since last we saw him,” Segura said. “He’d pulled himself out of the gutter, at least. ‘Down the Darkest Street,’ the second Pete novel, really dragged him down into the dirt and crushed his spirit. He was friendless, reeling from his addictions and had just faced off against a deadly serial killer. So I wanted to contrast that a bit and give readers a glimpse of a calmer, more serene life for him – at least in the opening chapter. But because he’s stubborn and curious and getting better at his job, things don’t stay quiet forever.”

That’s when the detective – already bored with following cheating spouses – is recruited by his sometime partner, who wants Fernandez to research a cop convicted of the murder of his wife for her next book. That’s when the dark side of Miami – and Fernandez’ own demons – begin to claw him back from the light.

“I think the genre demands that the protagonist be challenged,” Segura said, “whether he’s content or unhappy. You have to make the story of the detective facing off against something interesting. That journey needs to resonate. Otherwise, you’re just reading a book about a happy guy with no problems. I don’t know how well that would work. That said, I try to show a progression. When we meet him in
‘Silent City,’ my first novel, he’s a drunk who has no prospects. He stumbles into being a detective and, even then, isn’t particularly good at it. By the time we get to Dangerous Ends, he’s gotten some experience, he’s getting sober and he’s working on living a better life. But as he gets stronger and more focused, so do his challenges, and that makes it more interesting for me to write and hopefully for people to read. He’s not a static character.”

The genre, crime noir, is one with which Segura has some experience as editor of the Dark Circle Comics. Far from the squeaky clean Archie Comics of yore – and Riverdale itself – this particular line of books covers some pretty rough territory.

The Hangman, for example, is a supernatural crime story, where a dead hitman is charged by Satan to punish the guilty on Earth. “Black Hood” is even closer to Pete Fernandez territory, featuring a drug-addicted Philadelphia cop who stalks criminals as a hooded vigilante.

It’s a genre that appeals to Segura for a variety of reasons.

“Hard-boiled or crime fiction works on many levels, making it really flexible,” he said. “On one hand, you can tell a compelling, page-turning mystery, while at the same time showcasing the struggles of people in our time. It’s a really subtle but effective tool for social commentary. I like the PI genre because the hero is always the underdog, often very flawed,  and often at odds with not only the bad guys, but the cops and usually their own client. You root for them to overcome the odds and figure it out. Crime – whether it’s a murder of passion, a robbery or white collar crime – springs from a need of some kind, for money, recognition, love, revenge. Those are pretty basic, intense struggles that we can all relate to. If you’re genuine in how you show people reaching that point of desperation, that makes for a story that’s pretty hard to top. Crime fiction is the perfect vehicle for telling a great story and also putting a mirror up to society’s ills.”

So the comics bleed into the novels, and the novels return the favor.

“I think it’s about having a certain story sense,” Segura said. “I know what I like and have a certain aesthetic. As an editor, I look for stories that are grounded and feature flawed characters that overcome challenges to succeed. I think that can translate well into a variety of books, be it horror or crime or espionage. Having a flawed and possibly conflicted character as your lead is always going to be more interesting to me than a flawless hero.” 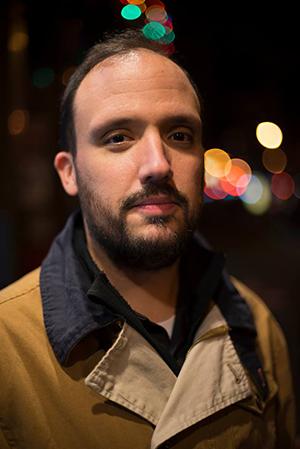 Submitted by the author

Alex Segura draws from his Miami childhood for the Pete Fernandez books.

And yet, this is the same man who wrote Archies Meet The Ramones, Archie Meets KISS and the upcoming The Archies (coming in May), about how the famed band comes into being in the revamped, retooled “New Riverdale” stories that recently updated the Archie gang for the 21st century.

“Music is a part of the [Fernandez] books, believe it or not,” Segura said. “Pete has pretty good taste in music! I was in bands when I was younger – only one of them got to the point where we played shows, but the experience was a big part of getting older for me.”

Music is important enough that Segura gins up soundtracks for each book.

“Usually songs that evoke a certain mood or sense of place,” he said, “that will quickly get me into the mindset I want to be in for the book.”

It’s music that Pete Fernandez probably knows well. It’s the soundtrack of his life, too.