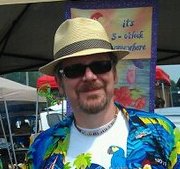 Rich Lane has not received any gifts yet

So, you want to know about Rich Lane? Pull up a chair...

I'm a high school English Teacher/Technology Coach in rural NW Pennsylvania.
I've been reading comics since I was old enough to realize the squiggles in the white boxes above the Flash's head actually meant something.

While still aspiring to be a comic book writer, I've managed to scratch one item off his bucket list when I succeeded in getting published in a national magazine. I wrote for Wizard for nearly a year for their "dot comics" column, starting with issue #110.

My first article had the Shakespearean title "Comic Book Babes Brought To Life."

I've got a couple of projects in the works right now. I've got what I believe is a superhero book with a lot of potential in the works with several issues completely scripted and waiting for an equally aspiring artist willing to work with a guy who's supporting two kids in college on a teacher's salary. I've got another project in the works with Atomic Pop Art which will probably see the light of day before the first one does.

I started a group here called "The Scribes" for comics writers both professional and aspiring. If you fit the bill, come on in and pull up a keyboard!

Mike Parnell said…
I think it is really nice. It may add some new dimensions to what is the "board." Nice work!

Commander Benson said…
I've only started to play with the features, Rich. Like most new boards, all the new toys to play with are slightly overwhelming, and since I'm not a techno-phile, it will take some time for me to explore them all. (I don't know a bloody thing about Facebook or MySpace or any of that.)

Naturally, there is a certain reluctance to leave the comfort of the established board, but life has taught me that, once the new becomes the way of life, within a few months, it will feel like it has always been that way.

In sum, I see no downside to this board.

Cat Beechler said…
I had a great flight...but slept 12 hours when I got back. Crazy!

Welcome to the potential new site.

If you haven't registered, go ahead and get started. Look around, play with stuff, upload a few pictures. If you are at all used to Facebook, this will seem very comfortable to you.