No American comics artist is better known for war stories than Joe Kubert, famed for “Sgt. Rock,” “Enemy Ace” and graphic novels such as Fax from Sarajevo. That regard is well deserved, and on full display in his latest GN, Dong Xoai, Vietnam 1965 (DC Comics,… Continue

One of the things that I love about comic books is discovering something new: meeting new characters, exploring new universes and finding new titles. Over the past couple of months, I’ve been scouring for something new to love. That doesn’t mean I’m dissatisfied with my current titles. I’ve been having a great time with Green Lantern, I’m excited about the X-Men and… One of my favorite characters- for almost as long as I’ve been reading comics- is Kurt Wagner, aka Nightcrawler.

The funny thing about it is that Nightcrawler wasn’t even in the first issue of X-Men
that I bought- Uncanny X-Men #202. His first…

May 18, 2010 -- It’s morning in America again – at least, the America in which Marvel characters like Spider-Man, Iron Man and the Avengers live. 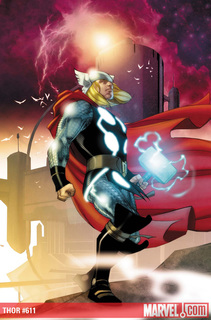 For a couple of years in Marvel comics, Norman Osborn – yes,… Continue

The Captain's rules finally written down!

So here's a rough draft, which I hope the Legionnaires will add to or revise. Feel free to argue that some ought to move up or down the list, or to add or subtract. Knock yourselves out,… Continue

Where Are They Now: CrossGen Part III

CrossGen continued to hire new talent and add new titles in 2002. They eventually expanded to a robust line of twelve monthly titles at which point they seemed poised to become a major player in the comic book industry. However, their continued expansion in 2003 led to a bloated line, increased debt and decreasing individual sales. Though this series of articles hasn’t been entirely chronological in nature, this third entry includes many of the…

ComicBase 14: Finally, I can throw away my notebooks

It’s been a few years since I experimented with software for managing comics collections, and if ComicBase 14 is any indication, they have become astonishingly sophisticated – and possibly indispensable.

Iron Man villains: Too dated for the movies?

So you’ve seen the trailers for Iron Man 2 and you’re wondering if this Whiplash guy is a major villain in the comics. The simple answer is "no." 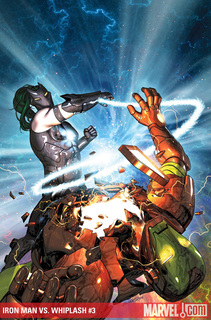 Where Are They Now: CrossGen, Part II

CrossGen launched its comic book line in the summer of 2000 with four titles: Meridian, Mystic, Scion and Sigil. That initial success demonstrated that they were a legitimate, viable comic book company and it allowed them to attract even more big-name creators. In that first year of publishing, CrossGen added veteran artists Butch Guice and Bart Sears and popular writer Mark Waid. However, their biggest splash came when they announced that they…

http://www.newsarama.com/comics/good-deeds-superpowers-100504.html I wonder if such a thing is possible. what do you say?

Breaking Through The Fourth Wall

I find the concept of having a reader interact with the story in a comic book to be interesting. Have any of you read such stories? if so, what did you think of them?
http://goodcomics.comicbookresources.com/2010/04/22/comic-book-legends-revealed-257/ The…
Continue

Where Are They Now: CrossGen

In the year 2000, a new comic book company entered the scene. They would eschew the superhero fare that was typical of most comic books and concentrate on underrepresented genres such as science-fiction and fantasy. They would borrow corporate techniques, developing an in-house art studio and attracting veteran comic book creators with benefits and health plans. They garnered a very loyal audience of fans and grew quickly-…

Lee Houston, Junior replied to Steve W's discussion A Cover a Day
"Another Neal Adams variant and his original work he homaged. (Images courtesy of the Grand Comics…"
8 hours ago

Richard Willis replied to Jeff of Earth-J's discussion E-Man
"I loved the original Charlton E-Man (with Mike Mauser!) also. I've never read any of the later…"
9 hours ago

Jeff of Earth-J replied to John Dunbar's discussion Marvel and DC Golden, Silver, and Bronze Age collections
""...the collections and OGNs in the "August" list are actually solicited for…"
11 hours ago

The Baron replied to Captain Comics's discussion Conan license yanked from Marvel Comics
"Didn't they just put Conan on an Avengers team?  Bet they feel like suckers now."
11 hours ago

Captain Comics replied to John Dunbar's discussion Marvel and DC Golden, Silver, and Bronze Age collections
"I don't doubt you're right, Jeff. There's a LOT of delay these days. I've got a…"
12 hours ago

Jeff of Earth-J replied to John Dunbar's discussion Marvel and DC Golden, Silver, and Bronze Age collections
"The Phantom Stranger Omnibus was originally solicited for May 24 release, so we may…"
13 hours ago