The X-Men line is often accused of being too extensive and bloated. And, honestly, sometimes it is. Yet, especially in the last five years, the X-Men line has also been the source of some surprising gems that for one reason or another went overlooked by the comic book audience. These excellent titles flew under the radar and were soon canceled- too soon, if you ask me. But…

There’s nothing an ink-stained wretch like this reviewer can add to the poignancy and lyrical beauty of Oscar Wilde’s stories. Fortunately, there’s plenty legendary artist P. Craig Russell can add, as he does in The Fairy Tales of Oscar Wilde Volume 5: The Happy Prince (NBM, $16.99). 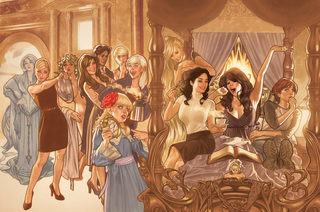 I’m usually on the lookout for interesting new comics and this past spring seemed especially promising with a number of new projects by familiar creative teams. Indeed, some series exceeded my expectations and are quickly becoming new favorites. However, others didn’t click right. They’re not horrible comics; they’re even well crafted to some extent but, for one reason or…

The new Gone to Amerikay (DC/Vertigo, $24.99) is not only a terrific graphic novel, it is a quintessentially American one. 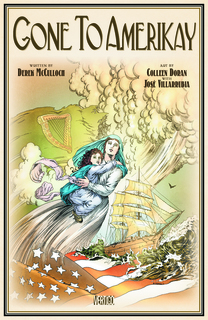 The plot is actually three plots, following three Irish characters who arrive in America in three different time periods (although the…

The Captain’s readers – honorary members of the Legion of Superfluous Heroes, all! – have been pretty vocal of late. This month’s mailbag contains questions about comic strips, the best “Favorite Find” story I’ve…

Lee Houston, who created "Hugh Monn, Private Detective," has another title out from Pro Se Press. Looks like "Project Alpha" has a superhero-y flavor, and deserves our support! Here's the press release:

From the creator of Hugh Monn, Private Detective, comes PROJECT ALPHA!  A tale of cosmic…

May was a big month for DC Comics, and it saved some of the best for last.

The first collections of DC’s New 52 – the massive re-launch of the publisher’s entire line of superhero titles, which took place last September – arrived in May, with predictable big titles…

Last month (Sorry about that folks, I (anacoqui) have been much too busy!), I started a series on the 100 greatest comic book characters of the ‘30s and ‘40s. I’ve been progressing…

'Batman: Death by Design' a GN designed to be good

May 29, 2012 -- Award-winning book designer Chip Kidd loves design. And he loves Batman. And he loves comics. And he loves writing. Combine all that, and you get his first graphic novel, Batman: Death by Design (DC Comics, $24.99).

Kidd has written a couple of novels, several comic-book stories and some non-fiction books (two on Batman). But this was his first long-form comics…

Captain Comics replied to Randy Jackson's discussion Misheard lyrics you prefer to the original
"Ahh, so that’s what it means. Danke."
10 minutes ago

Richard Willis replied to Jeff of Earth-J's discussion Swamp Thing
"ISSUE #40: Menstruation. It's not a common topic for a mainstream comic book, not in the…"
11 minutes ago

Jeff of Earth-J replied to Randy Jackson's discussion Misheard lyrics you prefer to the original
"That's "revved up like a deuce," ya know, as in "Little Deuce Coupe": And…"
20 minutes ago