Ya'll should read my post about Dexter in "Don't touch that Dial."

I happened to stumble across Wonder Woman #216 yesterday, because that's the sort of thing you find lying around our house.(In case you didn't know, the famous Captain Comics is my husband and our house doubles as the Comics Cave. We have anywhere from 50,000-60,000 comics in our house--even the Captain isn't sure of the exact number.) 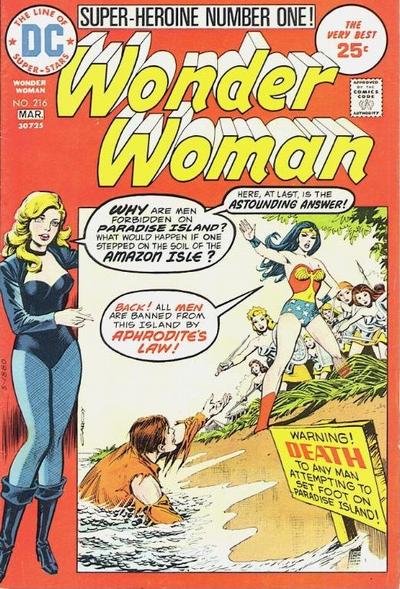 So Wonder Woman #216 from 1975 is lying out in the open as a consequence of the Captain's current re-boxing and re-boarding obsession. In… Continue

Yesterday I had one of those weird conversations white Southerners sometimes find themselves drawn into. I was talking to one of our older white neighbors, who is maybe in his 70's. He was doing me a favor by telling me about an affordable tree-trimming service, which we badly need to get rid of the tree that has taken our electricity and/or cable out 3 times in the past few years. He took the opportunity to ask me if I knew whether the people who bought the house across the street from us were… Continue

Hi, all! I've been meaning to start a blog, but just haven't gotten around to it. So I don't see why I shouldn't start one here.

Thanks to everyone who sent the Captain birthday wishes yesterday. He had a really happy birthday, which is good, because he has really started to dread birthdays. He says everyone forgot him last year on his 50th. While I don't think that's entirely true, I know those big "landmark" birthdays are stressful even though they shouldn't be because they just… Continue