On Jan. 23, DC Entertainment unleashed its superheroes on a real-world crisis: hunger in the Horn of Africa.

At a press conference, bigwigs at Warner Bros. (which owns DC Entertainment) announced the “We Can Be Heroes” campaign, which will support three aid groups working in Africa. Batman, Superman, Wonder Woman and the rest of the Justice League will be used to raise awareness, not to mention millions of dollars. 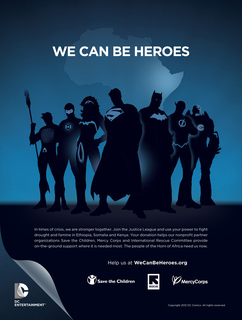 Both of which are needful. According to DC, the Horn countries are suffering their worst drought in more than 60 years. Some 13 million Africans are in need of critical assistance and 250,000 are facing starvation in Somalia alone.

DC’s effort will extend across all of Time Warner’s properties, including the use of the Justice League members as spokespeople, and exposure through Warner Bros., Turner Broadcasting, Time Inc. and HBO. If I’m understanding how this works properly, DC’s goal is to raise a minimum of $2 million during the next two years through cash donations, employee matching funds and consumer matching funds, which will be split among Save the Children, International Rescue Committee and Mercy Corps.

I’m assuming the way this will work will be advertising on all the Warner Bros. platforms that will direct people to the campaign’s website, www.WeCanBeHeroes.org. When you arrive, there’s a professional video that begins with the seven founding Justice Leaguers in silhouette that segues into quick interviews with ordinary people who have contributed. The point seems to be that they have become an unstoppable force for good by banding together, like the Justice League. How’s that for a snappy metaphor?

At the website you can contribute directly to the We Can Be Heroes fund, which DC Entertainment will match 100 percent, up to $1 million in total donations (which accounts for the $2 million goal). But you can also buy specially branded merchandise – We Can Be Heroes T-shirts, coffee mugs, that sort of thing – which will be matched at 50 percent. You can also join an online community and sign up for updates and information on the situation in the Horn and steps the campaign is taking.

I should note that comics have been involved in public service plenty of times before. The number of giveaway comic books featuring superheroes fighting ills like tooth decay or littering are legion. In the 1970s, Stan Lee famously ignored the draconian Comics Code to publish three anti-drug issues of “Amazing Spider-Man” in answer to a request from the then federal Department of Health, Education and Welfare. During World War II, you’d be hard pressed to find a comic book that didn’t urge kids to recycle metal and paper, grow a victory garden or “Keep ‘Em Flying!”
But there’s never been anything on this scale, and we should all salute DC Entertainment for their compassion and commitment. Oh, and throw a few bucks at ‘em for a coffee mug, will ya? Tell ‘em Captain Comics sent you. 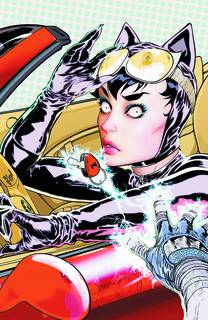 A shudder ran through the comics industry and fandom Jan. 18 when reporter Sherri Ly of “Fox 5” in Washington D.C. (WTTG-TV Channel 5) raised the alarm over “plenty of blood, sex and violence” in DC’s superhero comics. The report begins with “most people think comics are for kids” and then concludes breathlessly that “psychologists point out the overexposure to sex and violence for young children can encourage aggression.” Then it quotes various people as saying the books are “scary” or “fictionalized Playboy for kids.”

This is all hooey, of course. Because most comics – like most movies, novels, magazines, videogames and TV shows – are manifestly not for kids, and haven’t been for decades. The comics the article denounces are quite clearly marked for age 16 and above, so virtually all of Ly’s overheated rhetoric is simply irrelevant. There arecomics for kids, which are also quite clearly marked, and those don’t contain a lick of what Ly finds so dangerous.

But comics people find this hard to laugh off, because we’ve been here before – specifically in 1954, when comic books were used as a scapegoat for every social ill in America. The resultant hysteria nearly destroyed the industry, a body blow from which comics are still recovering. We can only hope that this time around Ly’s trumped-up smear job finds fewer takers.

PHOTOS IN THIS ARTICLE

1. The "We Can Be Heroes" print ad shows the seven founding Justice League members in silhouette. Courtesy DC Entertainment

2. "Catwoman" is one of the comics a Washington D.C. TV station found objectionable. Courtesy DC Entertainment

The description "fictionalized Playboy for kids" demonstrates a misrepresentation not only of comics but of Playboy magazine.

I haven't seen much Fox TV, but if this report on the ideological brainwashing in the Muppet movie is an example of its general standard of seriousness, it would appear to be every bit as biased, toxic and egregious as it has been portrayed by the commentators I respect.

Not that we shouldn't take it seriously.  A lot of real harm has been done over the years by biased, toxic and egregious manipulation of the more easily led sectors of the public.

Well, Fox's 'style of journalism' (ahem) materially affects those who despise it, as well as those who swallow their message.  That they are seen as ridiculous by many doesn't mean that we shouldn't worry about the affect of Fox News on the level of discourse in the US and what happens there.  And what happens there affects the rest of us, you'll not be surprised to hear.

But I take your point that this particular non-story probably won't go far.  Ultimately, I don't see Fox standing in the way of corporations right to make oodles of cash out of movies, toys, video games and over there in the corner, comics, even though all do affect young children, in one way or another.

Their attack on the Muppets shows that they are aware of how certain media products do affect the attitudes of growing minds, and also how keen they are to protect the rights of the rich to make money no matter what.

Without taking anyway from this discussion, I should add that "Fox 5" in D.C., while probably owned by or otherwise affiliated with Fox News Corporation, isn't part of Fox News on cable. It's a local broadcast outfit. If they are owned by FNC, which they probably are, there's no telling how much, if any, they answer to Rupert Murdoch and Roger Ailes.

Each of Fox's affiliates decide entirely off their own bat to cleave to Murdoch's party line in the majority of cases.

In 2004, the inner operations of WTTG during the station's first years under News Corporation's ownership were scrutinized in Robert Greenwald's documentary Outfoxed: Rupert Murdoch's War on Journalism. The documentary, through a panel of former WTTG journalists and staffers, claimed that following News Corporation's acquisition, WTTG's news reporting became biased and sensationalistic, much in the style of the Fox News Channel, which News Corporation also owns and which the film primarily criticizes. Former WTTG employees claimed that:

Good to know! And, sadly, not a surprise.

100% correct and I don't think there'd be a single objective observer who'd disagree with that assessment.

However, I'm pretty sure Fox 5 DC* would strenously deny that they were following any corporate line at all, but merely presenting the facts as they saw them.

I know nothing about such things, but wouldn't their licence to broadcast news depend on them not being influenced by outside parties.  Or wouldn't Murdoch's licence to own such stations depend on it being the case that he didn't try to influence their news agenda?

Hopelessly Utopian notion I know, but isn't that the theory?

Why do Murdoch's affiliates and properties keep insisting that they aren't pushing his agenda?  Maybe its just because he's nasty rich old foreigner?