A rich group of GNs, from The Louvre to Lovecraft, with Native Americans in between

What do an elegiac fugue, Native Americans and ancient horrors have in common? They’re each the subject of a terrific trio of upcoming graphic novels. 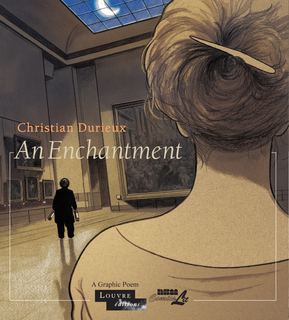 First up is the latest in NBM’s “The Louvre” series, in which different creators craft an original story whose only connection is the famous French museum. There have been four others up to now, but An Enchantment (coming March 19, $19.99) might be the best so far.

The plot, if you consider this dreamlike story to have one, is of a rich, politically important old man bailing out on his own retirement party, which is being held in the Musee de Louvre. After a lifetime of being Mr. Responsible, he sneaks off with two bottles of wine into the closed and darkened galleries. There he meets a young woman who takes him on a private, shoeless romp amid the world’s greatest art treasures, helping him to see them – and his own life – from a different perspective. Along the way there are revelations and regrets, laughter and laments.

Is she an assassin? A hallucination? A prostitute? A magical being? Or just an odd girl with a strange sense of humor and an affection for older gentlemen? After a while the reader, like our protagonist, no longer cares – it’s the journey, not the destination, that counts.

In an afterword, writer/artist Christian Durieux says his ambition was to create poetry in comics. With this beguiling, bittersweet reverie, I think he’s succeeded.

That period represents the end of the Wild West and the Indian wars, with Native American culture in its death throes. As such, there is a pall hanging over many of these stories and poems, a feeling of guilt if you’re white and a feeling of loss no matter what color you are. As you’d imagine, some of these stories are despondent or angry. But some are surprisingly hopeful or philosophical. Some are simply Native American legends or folklore, including the origins of the White Man, thunderstorms and flatulence.

As noted, anthologies are always a mixed bag, but the quality is high throughout. The eight stories and eight poems are illustrated by a wide variety of artists, whose styles range from cartoons to photo-realism. Native American writers John E. Smelcer and Joseph Bruchac serve as associate editors, and contribute one story each.

Lastly – and the last thing you should read before going to bed – is a classic H.P. Lovecraft story, invoking his usual themes: forbidden knowledge which drives one mad, and inhuman, elder evil lurking in history, waiting for its chance to return and enslave humanity again.

It begins when a dangerous inmate makes an impossible escape from an insane asylum after being visited by his family physician, leaving only a mottled, purplish residue on the floor of his cell. The physician is questioned, and from his lips spills a blood-curdling tale of alchemy, immortal evil, shifting identities and resurrection and torture of the dead. By the end, you know what that purple stuff is, and you won’t sleep very well.

This is Lovecraft’s longest story, and by my lights the best. And it’s published by SelfMadeHero, which has already shown its chops with two previous anthologies adapting Lovecraft stories to comics.

“The Case of Charles Dexter Ward” is adapted by English artist I.N.J. Culbard, who recently gained fame illustrating Dan Abnett’s The New Deadwardians for DC/Vertigo. His style is deceptively simple, almost sketchy, but his storytelling ropes you in and doesn’t let you go.

Or maybe that’s Lovecraft doing that. Either way, if you’re looking for chills, you’ll find them here.