The book in question is the hardback DC Comics Classics Library: Batman – the Annuals, Volume One ($39.99). It reprints Batman Annual #1-3 which, when originally published in 1961-62, reprinted 21 Batman stories originally printed from 1950 to 1958.

I was really eager to read these stories. Because they’re from the 1950s, a huge, sucking black hole in my knowledge of comic books.

You see, most comics from the 1950s have never been reprinted. Other decades are well represented on the bookshelves, but it’s just recently that we’ve started to see some four-color funnies from the Eisenhower decade. Marvel recently reprinted all its superhero tales from the ‘50s (which amounted to three hardcovers). And Dark Horse is dredging up lots of cool stuff I’ve only heard about but never read, like Dell’s Tarzan; Turok, Son of Stone; and Herbie. 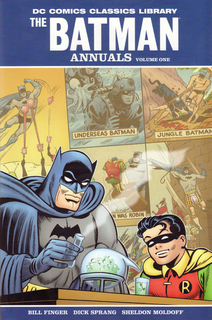 Notable in its absence in the ‘50s reprint market is DC Comics, which has reprinted relatively few of its many 1950s stories (mostly Lois Lane, Jimmy Olsen and Martian Manhunter). This is especially disappointing because DC is the only comics firm to have any superhero titles survive all the way through that decade: Superman, Batman and Wonder Woman, of course, but also the anthologies World’s Finest Comics, Adventure Comics, Detective Comics and Action Comics, which starred the Big 3 (or Superboy) but also gave us back-up stories starring Green Arrow, Aquaman and other second bananas.

DC does have an extensive reprint program, but one that – cruelly – seems to almost deliberately avoid the Big 3 in the ‘50s. None of the Batman, Superman and Wonder Woman “Archives” and “Chronicles” books, which reprint these characters’ stories in chronological order, have made it past 1949 (most haven’t made it past 1945). There are also more modern Archives series for Superman and Batman, which begin in 1958 and 1964, respectively. And the modern Wonder Woman “Showcase” collections also begin in 1958.

I am generalizing, of course. There are some ‘50s reprints of these characters, like in the World's Finest Archives and various themed hardback collections. Just not enough.

What’s the deal? Well, I’m not privy to DC’s editorial conferences, but I suspect there’s not a lot of enthusiasm for reprinting 1950s comics, because that decade’s output is widely regarded as mediocre (or worse). The infamous Comics Code was introduced in 1954, which reduced most comics content to pabulum. And when it comes to Batman, a notorious decision by DC editor Irwin Donenfeld in 1957 shoehorned the Dark Knight into wacky science-fiction stories where he was wildly out of place, until 1964.

All of which is reflected in Batman Annuals! Bat-movie producer Michael Uslan writes a foreword where he details where fairly innocuous pre-1954 panels were retouched to be less “dangerous” for children for post-1954 reproduction. And there are SF stories in here – particularly “Batman – The Superman of Planet X” from 1958 -- that have no business being Batman stories.

Also, as it happens, I owned Batman Annual #3 when I was a kid, and remember reading it over and over until it fell apart. It’s good to see that “old friend” again.

But there’s more! One thing I didn’t realize until now is that these Annual stories, being some of the very few 1950s Batman stories ever reprinted, are in some ways a shared experience for all Bat-readers of my generation. Which explains Batman: The Black Casebook – another recent DC reprint, containing 12 stories from 1951 to 1964 ($17.99).

The Casebook represents the stories that Scottish Bat-writer Grant Morrison referenced for his surrealistic, hallucinatory story “Batman R.I.P.,” which ran recently for about a year in Batman comics. And, surprisingly, I was familiar with most of them, despite their 1950s vintage!

Why? Because Morrison was drawing from the same pool of reprints shared by all Bat-readers of the early 1960s – of which I am one. Many of the Casebook stories are also in the Annuals because these stories aren’t just any 1950s Bat-stories; they are the Jungian subconscious that we older Bat-readers share of the ‘50s (until more reprints come along). It was a weird experience for me seeing “the Gorilla Boss of Gotham City” in the Annuals collection, knowing that Morrison – and all of our peers -- remembered it just as vividly as I did.

Comment by Jeff of Earth-J on October 1, 2009 at 12:07pm
Batman has been so dark for so long now that it’s sometimes difficult to remember a time when he wasn’t. Althought I bought the DC Comics Classics Library collection of the first three Batman Annuals the day it shipped, I hadn't planned to read it right away but i did because Michael Uslan’s introduction drew me in and made me want to read the stories inside as soon as possble. It would be pointless of me to post a reaction to each story contained in the collection because Uslan has already done a better job than I ever could, but I will quote his conclusion.

So sit back. Relax. It’s 1961. President Kennedy took office in January. In May, Alan Shepard became America’s first man in space as part of Project Mercury. Roger Maris broke the Babe’s record with 61 home runs. People don’y lock their doors or know where in the neighborhood their kids are during the day because it’s just… safe and sound. There are no cell phones, no internet, no computers, no iPods, no DVDs, no CDs. Life is so much simpler. Everyone is so much friendlier and happier. Even Batman.

Comment by Figserello on October 1, 2009 at 12:12am
I wonder is that the biggest by-line ever given to someone for writing the introduction to a book?

Grant's name is bigger than Batman's!

Comment by Captain Comics on September 30, 2009 at 8:08pm
There is some overlap. At least two stories I can recall off-hand -- "Batman, Indian Chief" and "Batman -- Superman of Planet X" -- are in both books.

Comment by Doctor Hmmm? on September 30, 2009 at 4:49pm
Thanks for the reminder that this is out, Cap! This has been high on my "Must Buy" list since it was announced.

Peter Wrexham replied to Steve W's discussion A Cover a Day
"Next, Dennis's cousin (their Mums are sisters) Minnie the Minx with her parents.  On the…"
15 minutes ago

ClarkKent_DC replied to Cavaliere (moderator emeritus)'s discussion What are you watching right now?
"I've got George Carlin's Class Clown on vinyl. I used to play it incessantly. He actually…"
12 hours ago

ClarkKent_DC replied to Steve W's discussion A Cover a Day
"Yeah, but ... here on Earth-Prime, when they gave us the Smallville TV series, Ma and Pa Kent were…"
12 hours ago

Jeff of Earth-J replied to Jeff of Earth-J's discussion Swamp Thing
"Thanks for the link! I forgot to mention that #78 was guest-written by Bissette (and…"
13 hours ago

It's the day after Halloween in 1988 when four young friends accidentally stumble into an intense time war and find themselves inexplicably transported to th...
13 hours ago
0 Comments 0 Likes

Richard Willis replied to Steve W's discussion A Cover a Day
"Steve W said: By 1967, DC had reached a continuity crisis. Supes had first hit the newsstands in…"
14 hours ago

Richard Willis replied to Cavaliere (moderator emeritus)'s discussion What are you watching right now?
"Another interesting thing is that the series is a period piece set in the 1970s. In the enormous…"
14 hours ago