Adaptation of 'Don Quixote' will make you LOL for real

It’s always difficult to translate a classic work from one medium to another. But with The Complete Don Quixote (SelfMadeHero, $27.50), English illustrator Rob Davis not only makes it look easy, he makes it hilarious. 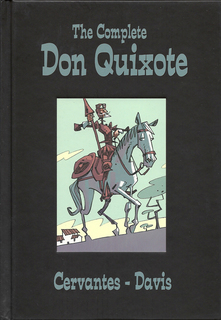 Credit where it’s due: The Ingenious Gentleman Don Quixote de la Mancha, by Miguel de Cervantes, is often called the first modern novel, and is usually near the top of “best of” lists in every genre in which it qualifies. Which is a lot! Cervantes covered a lot of literary ground in both form and content, as he examined themes of deception, subtly addressed class warfare, broke the fourth wall for both himself and his characters, pondered the nature of reality … well, the list goes on and on. And he did all this with enormous wit and humor, even bestowing upon the world the classic comedy duo of thin straight man/pudgy idiot (Laurel & Hardy, Abbot & Costello, David Spade/Chris Farley).

So Davis – who has illustrated for newspapers, children’s books and English comic-book strips like Judge Dredd – had a lot to work with. But even so, he did an outstanding job, one that had me laughing so loud and so often my wife started reading over my shoulder.

Davis is an insightful and accomplished cartoonist whose playful style is perfect for Quixote. Consistent with Cervantes’ themes, he juxtaposes a fairly complex depiction of Quixote’s face with a simplistic, circle-and-dots depiction for Sancho Panza. Quixote, living a complicated fantasy, is the more realistic of the two; Sancho, a simple man rooted in the real world, is the cartoon. And by placing the two together, it invites the reader to ponder the role perception plays in “reality” … while simply being amusing in its own right. I think Cervantes would approve.

Further, Davis embraces Cervantes’ destruction of the fourth wall and gleefully jumps up and down on the rubble. The book begins with Cervantes himself addressing the reader from his jail cell (yes, he was really jailed at one point), symbolized by word balloons arising from a barred window. That simple image invites the reader to surrender suspension of disbelief, while simultaneously putting the writer at enough of a remove to continue it. In short, we are being let in on the joke while being asked to pretend there is not one – while being aware that we are pretending! That clever idea could become tiresome in the hands of a lesser writer, but instead becomes funnier and funnier as the complex weaving of fiction with reality escalates. 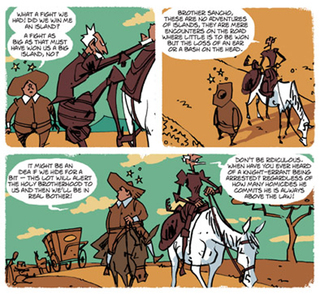 Complex, yes, but not stuffy and joyless. Instead, Davis never fails to entertain, even at his most academic. In one scene, for example, Quixote and Sancho enter an inn where an unnamed couple (who speak in Londonese slang) are discussing a phony second volume of Don Quixote that came out before Cervantes managed his own – one written by a rival that insulted Cervantes at every turn. The two decide that the phony Volume Two isn’t as funny as the genuine Volume One, with the young man proclaiming of the fake Volume Two, “Don Quixote’s not the man he was in this book!” Enter Don Quixote, whom both characters address without batting an eye, urging him not to follow the events of the faux book. Flipping through it, Quixote decides he is offended and agrees, changing the direction of the narrative at the behest of the readership!

“Bye!” says the young lady in the inn. “Try to be funnier for the rest of Volume Two! We like it when you’re both funny!” Alas, most readers and historians agree that the genuine Volume Two wasn’t as funny as Volume One either. At least the young lady can take comfort in appearing in the genuine article. Deconstruction of narrative isn’t the only joke in Don Quixote – in fact, most of the humor arises from the ever-escalating situations and farcical dialogue, which Davis plays for maximum effect. In one scene, a clergyman dressed as a woman (for noble reasons, of course) confronts a girl dressed as a shepherd boy, and demands without a hint of self-awareness, “What kind of stunt are you pulling here? What is the meaning of the cross-dressing?” And there are the more famous scenes, like the ones that gave us the phrase “tilting at windmills” and the name (and meaning) of “Lothario.”

Honestly, The Complete Don Quixote is a joy from start to finish. By mirroring and accentuating Cervantes’ themes, Davis should delight Don Quixote purists, casual readers and everybody in between.

Even though, as the characters would admit, the second volume isn’t as funny as the first.

I've seen this at my LCS a few times now, and it piqued my interest. Now I will probably pick it up. Thanks, Cap.

Very interesting. It sounds like this one would be good for school libraries.

Captain- Just to clear up for my fans( Hi, Mom! Hi, Sis!) out there that this Rob Davis isn't me and why I'm not getting royalty checks on this book. I'm the Rob Davis that drew for Malibu Comics and DC in the 90's on their Star Trek books. This looks like a stellar piece of work and I wish I had drawn it, but that's not me. To differentiate on the internet I'm RobMDavis and can be found at robmdavis.com. We now return you to your regular programming. *** Rob M Davis ***