Alan Moore's 'Swamp Thing': Sex and horror in the fen 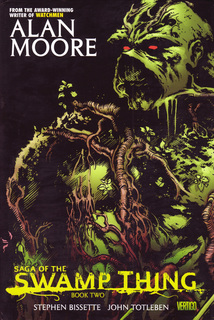 Saga of the Swamp Thing Book Two (DC/Vertigo, $24.99) continues the chronological reprinting, in high-quality hardback, of Moore’s legendary 1983-87 run on the muck monster. Just like the previous volume, the art is by Kubert School alumni Stephen Bissette and John Totleben (with fill-ins by Rick Veitch and Shawn McManus).

But that’s not all! “Down Amongst the Dead Men” (from Swamp Thing Annual #2) is an extra-long tale that is not only gripping, not only advances the overall story, but also mirrors Dante’s Inferno, with supernatural DC characters Deadman, Phantom Stranger, The Spectre and Etrigan the Demon playing afterlife tour guides in place of the Roman poet Virgil. “Pog” is a tribute to Walt Kelly’s Pogo, and uses thinly-veiled versions of the Okefenokee characters to tell a parable about man’s savagery. And, saving the best for last, the final story “Rite of Spring” (from Saga of the Swamp Thing #34) is the famous sex issue. Which, despite introducing the idea of a swamp monster and a human female finding congress of a sort, is beautiful – romantic, lyrical, surreal, breath-taking. All sex should be this good!

Award-winning writer Neil Gaiman plays Virgil, too, with an introduction specifying each story’s meaning and power. Quite a package, and highly recommended. 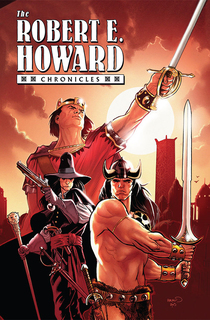 The set collects Marvel’s earliest work on Conan, Kull and Solomon Kane. Since this material is 25 to 40 years old, it necessarily pales in comparison to the work that Dark Horse is doing with these characters today, which meets (and often exceeds) the level of quality demanded by today’s more discriminating readers. But it is a reminder that when Marvel first brought these characters to comics, they brought their biggest guns to bear.

For example, The Chronicles of Conan Vol. 1 reprints the first eight issues of Conan the Barbarian, featuring writer Roy Thomas and artist Barry Windsor-Smith, and includes an adaptation of REH’s “Tower of the Elephant.” The Chronicles of Kull includes all Marvel stories about the King of Valusia, pairing siblings John and Marie Severin on art, with contributions by Bernie Wrightson and Wally Wood – and how can you top that? Writers included some of Marvel’s best at the time, such as Thomas, Gerry Conway and Len Wein. The Chronicles of Solomon Kane again features all the stories Marvel printed about this character, written by Thomas and Ralph Macchio, with art by Bret Blevins, Howard Chaykin, Mike Mignola (Hellboy), Bill Sienkiewicz and the legendary Al Williamson.

I originally wanted this boxed set to see what it might include that the individual books do not. And aside from ease of storage and attractiveness of display, the content is the same as the three trade paperbacks on their own. But what surprised me, seeing all these early Marvel efforts together, was the luminosity of the stars who worked on them. These three books, moreso than the rest of Marvel’s REH-adaptation oeuvre, simply belong together. 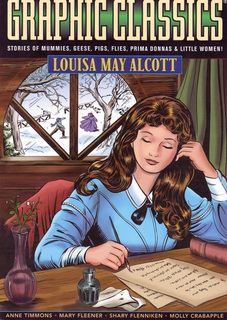 * Although I’m probably not the target audience, I enjoyed Graphic Classics: Louisa May Alcott (Eureka, $17.95) anyway.

The 17th in Eureka’s Graphic Classics series, and the second in color, the Alcott edition includes the author’s best-known work, Little Women, adapted by Trina Robbins and Anne Timmons. The art is charming and the writing faithful, so I put my male craving for explosions and fist-fights on hold and simply enjoyed being in the hands of two pros. But don’t worry, guys, this anthology (by a variety of artists and writers) includes some of Alcott’s darker work, like "The Rival Prima Donnas” and “Buzz.”

I’m still not likely to read Alcott’s prose, but I did enjoy these well-done comics. Graphic Classics: Louis May Alcott is a wide-ranging sample of the author’s style and subject matter, utterly painless even for those of us with a Y chromosome.

Comment by Mark Sullivan (Vertiginous Mod) on January 21, 2010 at 10:02am
I think I'm more excited by these Swamp Thing hardbacks than I am by Absolute Sandman. Haven't bought any yet, but I don't own any ST collections (just an incomplete set of the individual issues), so this would be the way to go.

Comment by Mark Sullivan (Vertiginous Mod) on January 21, 2010 at 10:03am
Oops, forgot to ask: has DC said how many volumes there will be?