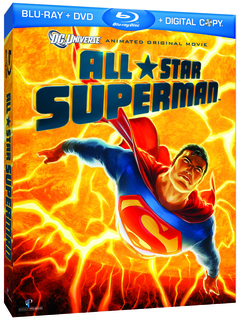 Writer Grant Morrison and artist Frank Quitely did something relatively new and entirely entertaining with their 12-issue All-Star Superman comic book. The animated adaptation from Warner Premiere isn’t nearly as ground-breaking, but still may be the best of the DC Universe Animated Original Movie series so far.

The original purpose behind DC’s “All-Star” line of comics was to put top-flight creators on the publisher’s top characters with no restrictions – free of the restraints of ongoing stories and decades of back story – and do their best work. It really didn’t work out that way.

Frank Miller’s All-Star Batman morphed into a sort of ongoing prequel to Miller’s 1986 Dark Knight Returns, and given how seldom it comes out, is practically an annual. All-Star Wonder Woman was announced, but never got published.

But All-Star Superman was exactly what DC had hoped for. Morrison and Quitely did the near-impossible: 12 issues whose main plots were self-contained to single issues (Lois Lane with super-powers! Lex Luthor escapes jail!), but whose overall themes and over-arching storyline (The Man of Steel faces his mortality!) ran the whole of the series. It was a standalone story – with a beginning, many middles and a definite end – that could be (and has been) neatly collected into two trade paperbacks.

And it was, by any metric, a treasure. Morrison’s story touched on everything that makes Superman super. He reminded us of the wonder of super-powers, such as we haven’t seen since the character’s early days. He explored Superman’s two main relationships – with Lane and Luthor – and amplified them to their natural climax. His 12 subplots touched on all the whimsy, humanity and clever concepts of the Man of Steel’s long history, from a small moment where Superman comforts a suicidal teen, to outré silliness like Bizarro World, to imagination-challenging super-feats like saving the sun.

But 12 little stories and one big story is a tall order for a 76-minute animated adaptation. Some of the best bits are left out, and some of the others don’t translate all that well to the big screen. And the very nature of the story makes the parade of short arcs seem choppy and episodic.

Still, much of the fun is still there, which makes All-Star Superman – which came out on DVD and Blu-Ray Feb. 22 – well worth it. A lot of credit goes to screenplay writer Dwayne McDuffie, a talented veteran of DC comics and cartoons. McDuffie died Feb. 23 from surgery complication at age 49, so this film is now the cap of his tragically foreshortened career. That could cast a pall over “All-Star Superman,” but anyone who has enjoyed McDuffie’s exuberant and thoughtful work over the years should treat it as a celebration of the man’s life and career. Clockwise from top left: Superman and Lois Lane flying after the Man of Steel gave her a 24-hour super-potion; Lex Luthor escaping jail; a close-up of "Superwoman" flying; and Lois using the facilities at the Fortress of Solitude, while on a date with Superman, who is chivalrously looking the other way. 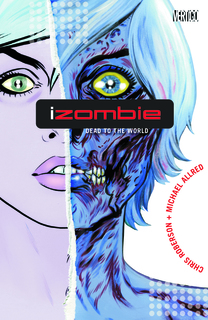 * Zombies have been so ubiquitous lately as to become tiresome, but Chris Roberson (writer) and Mike Allred (artist) have come up with a fresh take in iZombie, a new ongoing series. The first trade paperback, iZombie: Dead to the World ($14.99), is a treat for fans of horror, humor … and young romance!

The undead protagonist of the title is Gwendolyn Dylan, 20 and holding, who must eat a brain once a month to avoid becoming the shambling stereotype. She works as a gravedigger, so finding brains isn’t a problem. The downside is that she also ingests the memories of the dead, some of whom demand she find their killer.

So iZombie is a sort of undead detective series, which includes a ghostly go-go dancer from the swinging ‘60s, a were-terrier, vampire paintball players and other unusual denizens of the night. Drawn by the pop-art inspired Allred at his most groovy, iZombie is a cross between Dark Shadows, Beach Blanket Bingo and Gossip Girls. Amazingly, it works. 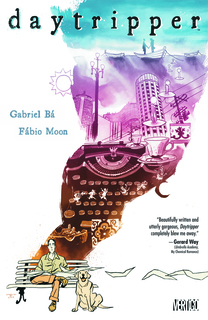 * Brazilian twin brothers Gabriel Bá and Fábio Moon combined on Daytripper, a self-contained 10-issue miniseries now collected in TPB ($19.99) – and it is a keeper.

Daytripper is 10 stories about Brás, an obit writer for a Brazilian newspaper, who is overshadowed by his famous writer father. From that one starting point, the twins tell 10 variations of Brás’s life, each ending with his death at a different age.

Written in the magical-realism style of Gabriel García Márquez, Daytripper is a warm mirage of a story, reminding us that life is random, which can be either wonderful or destructive – or both.

Comment by Cavaliere (moderator emeritus) on March 5, 2011 at 3:20am
iZombie sounds very good. I'll keep an eye out for that.

Comment by PowerBook Pete, the Mad Mod on March 5, 2011 at 3:12pm
I very much enjoyed the first six issues of iZombie.

Comment by Mark Sullivan (Vertiginous Mod) on March 5, 2011 at 6:37pm
I'm looking forward to iZombie & Daytripper as they get collected. Waiting on the library copy of Daytripper right now...

Comment by Jeff of Earth-J on March 7, 2011 at 8:56am
I think the animated All-Star Superman is a good adaptation of the comic in the same was the movie version of The Watchmen is a good adaptation; neither big nor small screen versions are as good as the comics because they can't be. Having said that, though, if the cartoon inspires viewers who haven't read it to seek out the original work it may be considered a success.

Comment by Travis Herrick (Modular Mod) on March 7, 2011 at 10:22am
I originally bought iZombie for the art, and stayed for the story. A great series.

I got All Star Superman yesterday. I don't buy a lot of DVDs, but I knew I'd never be able to see it otherwise. Baby Bean and I have watched the first half hour so far, and we're both enjoying it thoroughly.

We finished watching All-Star Superman last night. Baby Bean and I both enjoyed it a lot. I suspect I'll be seeing it again and again until I'm sick of it, and beyond.