Archaia's 'Bastards' fun but not pretty

When you buy a graphic novel from Archaia Press, you know one thing: It probably won’t be like any other graphic novel you’ve ever read. Hybrid Bastards ($17.95) is a case in point. 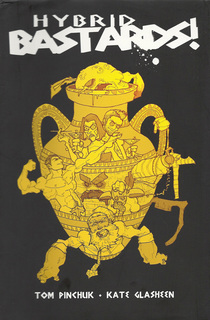 The concept is simple, ribald and truly weird. Also mythological: Hera gets fed up with Zeus cheating on her and puts a spell on him that for one night makes him mount everything in sight, including and especially inanimate objects. Zeus being a god, all of these objects become impregnated, resulting in half-humanoid hybrids that embarrass the sky king so much he sends goons to kill them all. “Hybrids” focuses on the survivors: Cotton, a collection of cloth that wants to be a lawyer; Carmine, a timid half-car; Corey, a self-loathing fruit; and Walter, a wall with a bad temper. They are led by Panos (the offspring of Zeus and a homeless man) in a quixotic quest to force their father to acknowledge paternity. Hijinks ensue.

I have to say that the concept alone is worth some sort of award. It’s a plausible extension of the myths, given that Zeus was forever transforming into bulls, swans and horses to have his divine way with Earthly wenches, whether they liked it or not. It’s true, Google it! Tom Pinchuk’s dialogue is appropriate, and appropriately goofy. So, good dirty fun all around.

I have to say, though, that I didn’t warm up to Kate Glasheen’s art. I think it’s watercolor or wash with some minimal ink outlines, which makes it appear unfinished and far too pastel. It’s also oddly angular and blocky, which I find unattractive. But my questionable art tastes aside, the main function of art in a graphic novel is to propel the narrative, and it fails on that score. 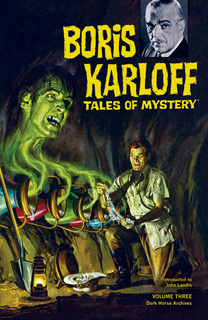 * They say you don’t know what you’ve got until it’s gone, and I’ve discovered that’s the case with the horror/suspense anthologies that used to dominate the comic-book medium in the 1950s and early 1960s but are now nearly non-existent.

What brought me to this epiphany was Boris Karloff Tales of Mystery Vol. 3 (Dark Horse, $49.99), which reprints six issues from 1965-66. These stories aren’t really anything special, generally written and drawn by B- and C-list talent, usually ending in a mysterious comeuppance for the ne’er-do-wells who populate them.

I didn’t appreciate these sorts of books back in the ‘60s, as I pursued super-heroes with a single-minded passion. But now that the genre is almost entirely gone, I find that I miss them, and the comforting formula they followed. Perhaps I’ll feel different around volume 10 or so, but for now I’m just wrapping myself in the warm nostalgia of a bygone age. 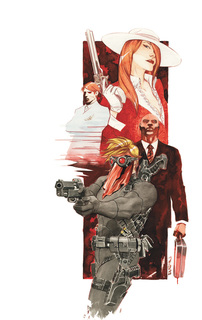 * I’ve never been a big fan of WildStorm’s superhero comics, as I found them – at least in the beginning, when they were part of Image Comics – derivative and shallow.* But I did enjoy WildCATs 3.0, the third version of the Covert Action Team, wherein they use their super-abilities to really improve the world … by becoming a multinational corporation and selling beneficial alien technology. As much as I like me some superheroes, that’s really a lot more plausible – and more effective – than pulling on a mask and fighting bank robbers.

And lo, here come WildCATs Version 3.0: Year One (DC/WildStorm, $24.99), which collects the first 12 issues. As I remembered, Dustin Nguyen’s art is classy and stylish. And Joe Casey’s story is even better than I remembered, not just because of its high concept, but because several lines of his 2002 dialogue are astonishingly prescient about the freedom of corporations to flout the law and the cowardly, corporate-owned media that looks the other way. It’s a lot of subversive fun.

* NOTE: As this story was being posted, DC Entertainment has announced that the WildStorm line will be phased out entirely. I, for one, won't miss it. 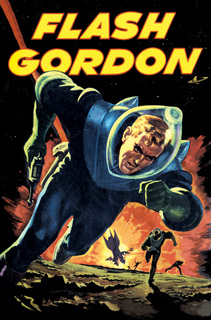 * The beauty and influence of Alex Raymond’s Flash Gordon comic strip is legendary. Flash’s comic-book adventures? Not so famous.

Nevertheless, Dark Horse has embarked on reprinting them all, beginning with Flash Gordon Vol. 1 ($49.99). This volume collects early Flash adventures from Dell, primarily his Four Color Comics appearances in the late 1940s and early 1950s.

It’s pretty mediocre fare, completely bloodless and formulaic. The only comfort is in knowing that future volumes will include work by the likes of Al Williamson, Reed Crandall, Archie Goodwin and Jeff Jones.

Meantime, go buy the gorgeous Alex Raymond stuff. There’s no need for Flash Gordon Vol. 1 on your bookshelf unless, like me, you’re a hopelessly addicted completist.

Comment by Jeff of Earth-J on September 23, 2010 at 11:48am
Boris Karloff (etc.): I felt exactly the same way about these types of comics in my youth as you did in yours, and I feel exactly the same way about them today as you do today. If you will allow me to make a recommendation (somewhat along these lines) to you, have you seen Four Color Fear: Forgotten Horror Comics of the 1950s? It shipped just yesterday from Fantagraphics Books and shot immediately to the top of my reading list! It’s the same size and format as last year’s Supermen!: The First Wave of Comic Book Heroes 1936-1941. There are about three dozen cherry-picked, non-EC, pre-code horror stories by the day’s top creators. The paper stock is bright white and non-glossy (making for excellent color reproduction), except for a center section featuring a selection of distinctive covers printed “full-bleed” (no border space) on glossy paper.

Take a look and read the back cover copy. I guarantee it’ll sell itself to you.

Flash Gordon: My earliest memories of Flash Gordon are among my earliest ever. I had one King Flash Gordon comic book (from a three-pack along with Mandrake the Magician and The Phantom), plus I had the outfit for my Captain Action doll. I’ll tell you one thing about the first volume of the new Dark Horse collection: it was hands down the thickest book I bought that week. I crammed this one into my eyeballs the weekend after it shipped, and consequently the details have already begun to fade from my mind. One thing I think did find humorous, though, is the cover copy of the first issue: “Introducing for the first time… FLASH GORDON COMICS especially written and drawn for this book.” That’s like saying, “If you want to spend your dime on non-Alex Raymond stories instead of reading the real thing in the Sunday paper, go right ahead, boy!”*

*(Yes, I stole that joke from Harvey Kurtzman.)

Comment by Figserello on September 23, 2010 at 8:27pm
As this story was being posted, DC Entertainment has announced that the WildStorm line will be phased out entirely. I, for one, won't miss it.

That's a very interesting footnote. Hopefully this means that the Wildstorm universe will become a true alternate Earth in the DC Hyperverse. Even if its comic history and character only rarely shone, it still has its own history and character that could be used well as a 'foil' in mainstream DCU titles. So long as they don't just destroy it or restart it as a sales gimmick.

Comment by Captain Comics on September 23, 2010 at 11:36pm
The article I read about WildStorm (at ICv2.com) was short, and short on details, but it appears some WS books will make the transition into the DCU, or at be published by DC (whether anyone meets Superman or not). In particular the licensed properties will continue under the DC logo, at least until the licenses run out.

It only makes sense to can the line, as few (if any) of the books ever sold in the five figures. The only reason I could figure for DC to keep publishing the thing was to keep Jim Lee happy (and drawing, if not frequently). Now Lee has moved up the ladder and is focusing on other things, so I guess he doesn't need his blankie any more. That's my theory, anyway.

And Jeff, I ordered Four Color Fear from Amazon last month! It was supposed to ship sometime in September, but the last I saw it has been postponed until sometime in October. When I will actually get it, no man can say. Or woman, either.

Comment by ClarkKent_DC on September 24, 2010 at 1:14am
When I started actually buying my own comics in my teenage years, I couldn't get enough of those horror/suspense anthologies! They were like popcorn -- read 'em once and throw 'em away. And they were plentiful, and plenty cheap! Cheap is good! (I used to get a lot of comics from neighborhood corner stores that sold back issues for a dime apiece, sometimes with the covers included!)

I loved them all -- Marvel's reprints of its Timely/Atlas stuff from the '50s, DC's anthologies of new material (House of Mystery, House of Secrets, The Witching Hour, The Unexpected), Gold Key's Boris Karloff Tales of Mystery -- and the like. Back then, I didn't run across much of the EC stuff, and reading it later, it doesn't do much for me.

I know that's sacrilege, because everything from EC is supposed to be the greatest thing since cavemen started painting on the walls, but it doesn't hit the right tone of cheesy fun that I would get from the Marvel reprints or the new DC material, which was mostly drawn either by veteran craftsmen in the Phillippines (like Reuben Yandoc, Fred Carillo, Alfredo Acala, Alex Niño and others) or rookie artists who were learning how to hold a pencil before they were allowed to "graduate" to more important titles.

I miss those books because they're long gone, but I always liked them!

Comment by George on October 11, 2010 at 3:10pm
"I didn’t appreciate these sorts of books back in the ‘60s, as I pursued super-heroes with a single-minded passion. But now that the genre is almost entirely gone, I find that I miss them, and the comforting formula they followed."

I also miss the wide variety of genres available on newsstands in the '60s and '70s. As Douglas Wolk has written, mainstream comics were always genre-based ... but there used to be a lot MORE genres.

The comic shop revolution may have "saved" the comics industry, but at the price of killing these other genres. In the newsstand era, comics had to appeal to a general audience that liked many genres. In the shops, they had to appeal to a fan audience that overwhelmingly preferred one genre: superheroes. Companies that couldn't create popular superheroes couldn't survive in the shops. Thus, no more Warren, Gold Key or Charlton.

Comment by Rob Staeger (Grodd Mod) on October 11, 2010 at 6:46pm
I just picked up a beat-up issue of Boris Karloff Tales of Mystery (#37, from Oct. 1971) for a dollar at NYCC -- Chuck Rozanski had a table full of loose, unbagged old comics for a buck apiece -- and while I enjoyed the purchase, I can't imagine paying $50 to read six of them. Don't get me wrong, I'm glad comics like this are being preserved, and I hope they find an audience, but there are so many other hardcover comics reprints that I could spend that $50, I can't imagine ever getting to the point where the Karloff books will make it into my library.

Comment by Captain Comics on October 12, 2010 at 12:59am
The art for the comics in Flash Gordon Vol. 1 was by Paul Norris (mostly covers), Frank Thorne and a lot of "unknown."

I should also say that the one thing I unequivocally enjoyed was the cover. Dell comics had some great painted covers, looking nothing like their contemporaries.