There are few graphic novels that not only benefit from multiple readings, but demand they be re-read. Spaceman (DC/Vertigo, $24.99) is an example.

The premise alone is fascinating: The “spaceman” of the title is Orson, a hulking bruiser in the near future, genetically engineered to survive a trip to Mars and do manual labor there. But when the controversial program that created Orson and his 16 equally anthropoidal siblings became public, the outrage costs NASA its funding and Orson his future. Instead of living and working in outer space, he scratches out a living dredging up salvage from America’s seacoasts, which were flooded after the icecaps melted. What isn’t drowning in this greenhouse world is burning, except for narrow strips between fire and flood where the wealthy live as well as ever. 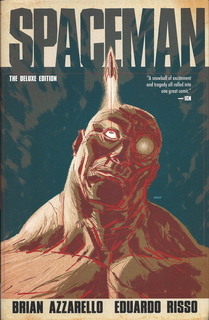 In an interview, writer Brian Azzarello said Spaceman wasn’t a post-apocalypse story, so much as “a collapse. An environmental and economic collapse.” And it’s not science fiction so much, he said, as “science hell.”

Which is just the set-up. The plot involves the kidnapping of a celebrity couple’s child, who falls into Orson’s orbit. Will he save her? If he tries, what chance does he have against the competing bandits (and one of his siblings) who want the reward? And, even if he can, is he doing it out of altruism – or the money?

“He has a good heart, but only Mother Teresa has never given in to temptation,” Azzarello laughed. “There’s a noir element to it. If there wasn’t, I wouldn’t be working on it.”

Which is obvious to anyone familiar with Azzarello’s career, famed for the crime noir series 100 Bullets, the Western noir series Loveless and currently “Wonder Woman” – which is framed not as a superhero book, but one exploring the Greco-Roman gods, a group Azzarello calls “the original crime family.”

Azzarello is teamed with artist Eduardo Risso, his partner on 100 Bullets, and Risso’s work is – as always – gorgeous. But, in many ways, the writing is still the star.

For example, Orson is named for Orson Welles, who – among other things – has a connection to Mars in the form of Welles’ famed 1938 radio broadcast, War of the Worlds. In fact, Azzarello said, all of genetically-altered children were named with Mars references. The entire book is laden with this sort of wordplay, from chapter titles to the dialogue, mostly delivered in futuristic slang based on texting-speak.

That’s one reason Spaceman needs a second reading, to catch all of Azzarello’s clever references, puns and double entendres. But another reason is that all of this cleverness is in service to the story, which involves overlapping storylines, plots, double-crosses and triple-crosses, with echoing themes both overt and sub-rosa.

All of which, again, is mirrored in another story, set on Mars – the astronaut future Orson was promised but which we’ve been led to believe never happened. Azzarello never explains these vignettes, which tell another crime story involving two of the same players (Orson and his bounty-hunter brother, Carter). We follow this story in Orson’s head when he is unconscious, dreaming or intoxicated, but it’s never clear whether this adventure is a memory or a fantasy. If the latter, Orson has an implausibly active imagination, but if the former, how and when did this mission occur?

These are the sorts of questions roiling through the reader’s head after the first read. It will surely take a second reading – or perhaps a third – to uncover all the clues necessary to piece this puzzle together, as well as for full appreciation of a complex story.

Speaking of complexity, one other graphic novel this week takes on a complicated topic, but tries to make it simpler. 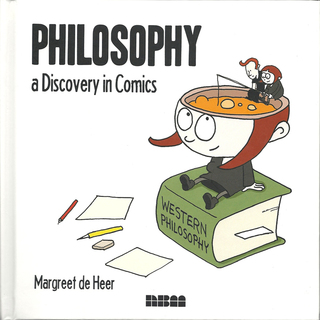 Philosophy: A Discovery in Comics (NBM, $16.99) falls into the category pioneered by Larry Gonick’s “A Cartoon History of the Universe”: A textbook masquerading as a comic book. But that’s not a bad thing; the reason the textbook-as-graphic-novel genre exists is because it works.

In Philosophy, Dutch cartoonist Margreet de Heer explains and explores the major philosophies of Western thought, with brief biographies of the major Western philosophers. That means she starts with Socrates, Plato and Aristotle; follows through with Thomas Aquinas and  Augustine; then hits “free will” and branches into all sorts of directions.

If that sounds boring, it honestly is not. No matter the subject, a good cartoonist can make it lively and absorbing, and de Heer is a good cartoonist. I am one of those who always found philosophy boring, but not here. For example, now that I have a visual understanding of Plato’s “Allegory of the Cave,” I understand it implicitly and don’t find it boring at all.

Nor does de Heer limit herself to the classical approach to philosophy. In the section on modern philosophies she plows far afield of academia, exploring the beliefs of friends and family, as well as unofficial philosophers like comedian George Carlin.

As I usually say in these circumstances, this is a book that belongs in schools. If I can finally learn about philosophy from comics at my ripe old age, think what fires it would light in the minds of the young!

1. Spaceman is a sci-fi noir about a genetically engineered brute who runs across a kidnap scheme. Copyright DC Entertainment Inc.