'Batman: Year One' makes transition to animation with story intact

Oct. 18, 2011 -- Batman: Year One is one of the most critically acclaimed and fan-revered stories about the Dark Knight. Wisely, Warner Bros. has hewed closely to the original for its animated adaptation. Originally published as a four-issue miniseries in 1987, BYO was actually two stories: One dealt with how Bruce Wayne began his Bat-career; the other was the story of a young Lt. James Gordon rising through the ranks as he tackled corruption in the Gotham City PD. The latter answers the long-standing question of how a by-the-book, family-man cop comes to trust a masked vigilante.

Weaving in and through these parallel tales are a (possible) origin for Catwoman, a scene with assistant district attorney Harvey Dent (a Bat-ally, before he becomes Two-Face) and the introduction of Carmine “The Roman” Falcone’s crime family, an element that has become a staple of the Bat-books, cartoons and movies. All of these characters clash in a huge Shakespearean drama involving murder, infidelity, blackmail and lies.

BYO was penned by writer/artist Frank Miller (300, Sin City) at the top of his game, after he had written and drawn the game-changing Dark Knight Returns a year before. It was drawn by David Mazzucchelli, a brilliant delineator of gritty, atmospheric, street-level crime noir. Together they created a plausible, unforgettable origin not just for Batman, but for his entire milieu, most of which has been adopted by DC Comics as the official story. (The Catwoman origin, which posits Selina Kyle as a dominatrix and prostitute before becoming a cat burglar, is still held at arm’s length by the DC powers-that-be.) 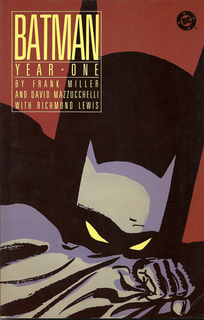 This talent pool is necessary, because bringing Batman: Year One to the screen successfully is no ordinary job. As noted above, there is a huge amount of story to pack into 64 minutes. Some elements (Dent, for example) get such short shrift that they depend on the audience’s knowledge of the Bat-universe to fill in the blanks. The story’s structure is a little shaky. And at times you’re being whisked along too quickly, as the film really could have used another 30 minutes to let this sprawling story breathe.

But Montgomery and Liu do slow down enough for some scenes to shine through. Batman vs. the Gotham SWAT team is epic. Gordon’s hunt for the man behind the mask lingers on Bruce Wayne long enough to become an instant classic. Every scene with the outraged Catwoman – whom the press initially characterizes as Batman’s “assistant” – is a keeper.

As to the animation, BYO is only ordinary, typical of what you see on Saturday morning TV. But it does seem to utilize Timm’s “dark deco” style that he developed for Batman: The Animated Series, and – despite the lack of detail – manages to capture the spirit of Mazzucchelli’s brooding original. Many scenes clearly used the print version as a storyboard, resulting in a thrilling shock of recognition for long-time comics fans. 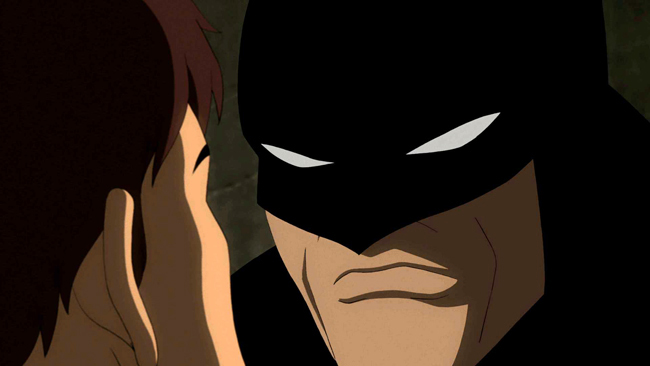 In short, Batman: Year One is far too truncated, and some (especially newbies) might find it boring or hard to follow. But Warner Bros. has puts its best vets on a task Bat-fans have anticipated for years, and you can’t ask for better than that.

Batman: Year One is available as a Blu-Ray Combo Pack ($24.98) and DVD ($19.98), On Demand and for download through iTunes, Xbox Live, Zune, VUDU HD Movies and Video Unlimited on the PlayStation network & Sony Entertainment Network.

BYO is PG-13, for violence and sexual suggestion, especially in the Catwoman short included on the two-disc packages. One scene takes place in a strip club, which I’m beginning to think is mandatory in modern entertainment. But, as I’ve argued about Catwoman the comic book, she’s the one character I’ll give a pass to for being depicted in what I’d normally call a sexually objectified manner, because she does it on purpose – she’s the original femme fatale in comics, using her looks as a weapon going back to 1940. 2. Batman: Year One was first collected as a graphic novel in 1988. A new deluxe hardcover is due in 2012. Courtesy DC Entertainment
3. The BYO Batman will be familiar to fans of Batman: The Animated Series. Courtesy Warner Home Video
4. Catwoman goes undercover in a strip club in her solo adventure on the BYO two-disc sets, distracting the bad guys with her charms before taking them out. Courtesy Warner Home Video

I rented this & watched it a couple times. I have to admit they did an excellent job bringing the comic to the small screen. It's good to see at least some directors getting the hint about adapting comics-to-video.