This is all due to the blockbuster miniseries Blackest Night, now at its midway point. (It climaxes in March.) This story, which has many spin-offs and affects most DC books, features Black Lantern power rings (like Green Lantern’s, only eee-vil) resurrecting dead loved ones from the grave to kill the living. Posters on my Web site (captaincomics.ning.com) describe it as “creepy,” “unnerving,” “gruesome,” “brutal,” “raw” and other such compliments. 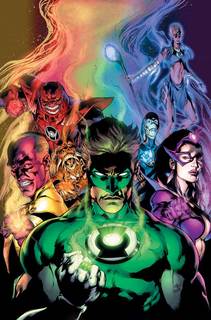 Meanwhile, sales are surging. Blackest Night #2 was the biggest seller in August, according to Diamond Comic Distributors Inc., and Green Lantern has more than doubled its sales from this time last year. That makes retailers very happy.

“I have yet to hear a bad thing about this story,” said Brian Jacoby of Secret Headquarters in Tallahassee, Fla. “I think it’s one of the best ‘event’ comics ever done. The story is tightly plotted, with lots of ‘Holy Moley!’ moments, some stunning visuals, and it’s obviously being done with love and respect for the characters. DC has hit a home run with this event in a way I've never seen before.”

What’s so cool about Blackest Night? Well, as I write this, Martha Kent is being chased through a cornfield by a dead friend. Batman is fighting off his dead parents. All the dead members of the Justice League have arisen, from Aquaman to Martian Manhunter to the Elongated Man, and have already killed two more members – who promptly joined the Black Lanterns. And at the center of the storm, on the planet that serves as the headquarters of the Green Lantern Corps, all the dead Green Lanterns – of which there are jillions – are trying to “recruit” their living counterparts.

Spooky? Yes. Because, says DC editor Dan DiDio, Blackest Night isn’t a superhero story – it’s a horror movie. In explaining the concept, he refers to Alien, The Exorcist and other famous, frightening fare.

“You can see how the stories develop, in the earliest issues of Blackest Night, they play out like horror movies,” he said. “We were laughing as No. 3 was being created, because you have the moment between the two young lovers [a hero and his girlfriend] at the beginning … and you’re like, as soon as you see the scene, you go ‘This is going to go horribly, horribly bad.’ And sure enough, it fulfilled those expectations.”

Spoiler: The girlfriend was turned into a pillar of salt! Since most Blackest Night victims get their hearts pulled from their chests, she got off easy.

What’s next? Well, October brings Blackest Night #4, titled “100%,” and refers to the power levels of the Black Lantern rings. Readers have noticed that the more the Black Lanterns kill, the higher their power-ring levels.
“The fact of the characters being reanimated from the dead is just a means to an end,” DiDio said, “and what the end is we’ll start to reveal more of as we hit #4.” He also added, chillingly, that the dead people aren’t wearing power rings, but that the rings are alive, and “wearing the dead people.”

“We’re going to have a little fun,” DiDio said. “We’re not only returning characters from the dead in Blackest Night, but … we’re actually bringing eight canceled titles back from the dead for one issue.”

So look for brief resurrections of Atom and Hawkman, Catwoman, Phantom Stranger, Power of Shazam, The Question, Starman, Suicide Squad and Weird Western Tales, all related to the overall Blackest Night story.

After “Blackest Night,” what then? What of the various power-ring Corps? DiDio says some storylines and characters will continue … or maybe not.


Contact Andrew A. Smith of the Memphis Commercial Appeal at capncomics@aol.com.

Comment by Mickey McLaurin on October 8, 2009 at 9:46am
So what title is the Dove image from? And how many dead Doves are there now, anyway? Enough to make Dove soup?

Comment by Captain Comics on October 8, 2009 at 12:28am
Alas, I called him "Ron" for some reason. I've fixed it in the copy above. Too late for CBG and syndication. I am filled with more shame than usual.

Comment by Rob Staeger (Grodd Mod) on October 7, 2009 at 1:09pm
Wow -- I'm really looking forward to a few of those one-shots -- Atom & Hawkman, Starman, the Question and Suicide Squad in particular. Weird Western Tales could be a lot of fun, too.

Comment by Captain Comics on October 7, 2009 at 10:40am
I dunno about original style, and I doubt it -- because they're going to be set in modern continuity, especially in regard to Blackest Night. (I imagine Suicide Squad, for example, will feature a Black Lantern Captain Boomerang, and Atom and Hawkman a Black Lantern Hawkman.) I asked him if Atom and Hawkman would have art by Joe Kubert (who did the original Atom and Hawkman #41-45), but he dodged the answer, so I'm guessing not.

I hope everyone's enjoying the BN artwork, because it took me three (*&$$%$%!! tries. Why would they send lo-rez art that's both progressive and CMYK, when the Web accepts neither? Grrr.

Comment by ClarkKent_DC on October 7, 2009 at 10:19am
So ... these back-from-the-dead titles will be written and drawn in the old style? Or, at least, will have the original-style logos and such? I wouldn't mind getting the Atom and Hawkman one just for those way cool go-go checks across the top of the front cover ...

Jeff of Earth-J replied to The Baron's discussion Movies I Have Seen Lately
"ANNIE: Another one we chose while flipping through the guide. When I was in high school we played a…"
33 minutes ago

Jeff of Earth-J replied to Steve W's discussion A Cover a Day
"Father and son robot fighters:"
44 minutes ago

Peter Wrexham replied to Steve W's discussion A Cover a Day
"Next, Dennis's cousin (their Mums are sisters) Minnie the Minx with her parents.  On the…"
1 hour ago

ClarkKent_DC replied to Cavaliere (moderator emeritus)'s discussion What are you watching right now?
"I've got George Carlin's Class Clown on vinyl. I used to play it incessantly. He actually…"
13 hours ago

ClarkKent_DC replied to Steve W's discussion A Cover a Day
"Yeah, but ... here on Earth-Prime, when they gave us the Smallville TV series, Ma and Pa Kent were…"
13 hours ago

Jeff of Earth-J replied to Jeff of Earth-J's discussion Swamp Thing
"Thanks for the link! I forgot to mention that #78 was guest-written by Bissette (and…"
14 hours ago

It's the day after Halloween in 1988 when four young friends accidentally stumble into an intense time war and find themselves inexplicably transported to th...
14 hours ago
0 Comments 0 Likes