Aug. 17, 2010 -- While the hard-boiled detective story is popular in graphic novels these days, I haven’t found better than Blacksad, recently collected by Dark Horse ($29.99). Which is kind of unexpected, since this quintessential American genre is expertly limned by two Spanish creators, and because all the characters are animals. 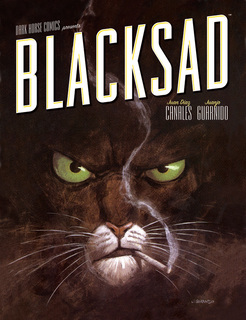 Blacksad is comprised of three stories by Diaz Canales and Juanjo Guarnido, originally published in Europe, with two of them previously reprinted in the U.S. by Dargaud in the early 2000s. The first story, “Somewhere Within the Shadows,” is a classic noir thriller wherein our world-weary gumshoe tries to find the killer of a famous actress, who is, naturally, a former lover, and bears a striking resemblance to Lauren Bacall in the 1930s – despite being an anthropomorphic cat (or perhaps a fox). The second story, “Arctic Nation,” examines race relations with an overlay of actual American history, with the rise of a KKK-like group of the story’s title (comprised of all-white arctic animals), and the use of lynching and “passing” as story points. The third story is the Blacksad version of how the Soviets got the bomb in the late 1950s, with enough references to McCarthyism and other concurrent events to reveal that the creators know more American history than most Americans.

But let’s get to the animal thing, which may lead some to snicker. You shouldn’t. As legendary artist Jim Steranko says in a foreword, all characters are “visually crafted to reflect their intrinsic qualities – which might just qualify as overt symbolism. Or just typecasting.” So, yes, a slippery character is a lizard, a greedy one is a pig, a dogged policeman is a German shepherd. It could be annoying if it wasn’t so skillfully done; the art is so beautiful and the effect achieved so naturally that one forgets after a while that one is looking at animals. Guarnido gets more expression from a face with whiskers than most artists do on faces without.

Mostly the zoological differences are ignored – it doesn’t seem to hinder any sexual pairings, for example, of which there are a lot – but sometimes they are a plot point. Blacksad himself is a black cat, with a white muzzle. In “Arctic Nation,” white animals distrust him because he’s mostly black and black characters distrust him because he’s partly white. While his “race” is never clearly established, one suspects he’s a mix, which would further explain his solitary existence.

So, like R. Crumb’s “Fritz the Cat,” Blacksad occasionally uses animals to make a point. But mostly it’s irrelevant – as Shakespeare said, the story’s the thing, and Blacksad is comics storytelling at its best. I wasn’t much of a Sgt. Rock fan growing up, because I found the stories – in the phrasing of my youth – “dumb.” (Obviously, I was born to be a critic.) I’m still no fan of the work of Robert Kanigher (who wrote most Sgt. Rock stories), but as an adult I’ve found a reason to enjoy Sgt. Rock: the terrific artwork of Joe Kubert, which I did not appreciate as a pre-adolescent, but which now fills me with awe.

First: Kanigher. He has his fans, but I find his dialogue painfully stilted, his plots ham-handed, and his stories padded with pointless repetition to get to a climax so predictable it wouldn’t surprise a child. And where else are you going to find wince-worthy attempts to be relevant like this prize piece of 1966 exposition: “The combat-happy Joes of Easy tore into the Nazis like teenagers wolfin’ up a six-foot-long hero sandwich after rockin’ and rollin’ at a hullabaloo party …” Like ouch, big daddy.

But what makes Rock sing is Kubert, who is at his peak in the latest collection, Showcase Presents: Sgt. Rock Vol. 3 ($19.99) which reprints Our Army at War from late 1964 to early 1967 in black and white. Kubert is a virtuoso in these stories, demonstrating his mastery not just of form, but all manner of rendering – from stippling to feathering to pointillism to cross-hatching to chiaroscuro. Sometimes it’s hard to stop staring in wonder at one page to get to the next.

Kubert is occasionally spelled by Russ Heath, another expert at delineating the exquisite detail of exploding tanks, World War II web belts and chin stubble. (Lots of chin stubble. LOTS.) So ignore the stories in Sgt. Rock and absorb the atmosphere of master artists at work.

Comment by Travis Herrick (Modular Mod) on August 19, 2010 at 3:10pm
Oh man, I couldn't agree about Blacksad more. The second story was easily my favorite, and really showed the ridiculousness of basing anything off of skin color. The size of the book really gives the beautiful art a chance to breathe, it was gorgeous. Easily one of the best books I have read this year.

Comment by Randy Jackson on August 19, 2010 at 10:47pm
It's funny--I expected to feel somewhat cool towards Sgt. Rock and to really enjoy Enemy Ace--and of course it ended up being entirely different.

I'm not going to pretend that the Sgt. Rock stories are the greatest thing since sliced bread, but they're entertaining enough. True, they are somewhat repetitive, but there's more of a sense of reality than I was expecting. Members of Easy die frequently--some more than once--and life tends to be pretty cruel.

I think the secret is that I've read Sgt. Rock in small chunks, maybe 2-3 stories at a time, rather than attempting to slog through a large portion over a couple of days. Perhaps that's why you're not enjoying it the same way I am.

Still better than Blackhawk, however.

Comment by Philip Portelli on August 20, 2010 at 12:48pm
I always felt that Kanigher fitted established characters into his stories instead of tailoring his stories to established characters. Of course, he cared little for continuity so it was probably best not to read straight through. However his Enemy Ace stories were cleverly crafted, though they too could be repetitive. Wolf. Check. Beautiful Nurse. Check. New Pilots. Check. Strangely named Allied Pilot. Check. "Sky is Killer of Us All". Check.

Comment by Jeff of Earth-J on August 23, 2010 at 10:33am
It’s often been said that Sgt. Rock died of the last shot fired in WWII, but I’ve never been able to pin down the actually story itself. It has become my theory that the rumor arose from the title of the Sgt. Rock story “Last Man, Last Shot” which had nothing to do with Frank Rock’s death, but rather soldiers who were able to fire off the last decisive shot of a battle “one second after they’d stopped breathing.” Last week’s issue of DCU Legacies, however, featured a back-up tale of the Bi-Centennial reunion of virtually every one of DC’s surviving WWII heroes (drawn by Joe Kubert) in which the final fate of Sgt. Rock finally saw print.

Comment by Captain Comics on August 23, 2010 at 4:37pm
I've heard that expression, too, Jeff -- but dismissed it as fan preference, rather than editorial position, since Rock appeared in a number of post-World War II stories, including team-ups with Batman in Bob Haney's run on Brave & Bold. He also, IIRC, was in Luthor's cabinet when Lex was president.

Of course, now that we're post-Final Crisis, that may have changed. Or maybe, like The Losers, his death is multiple choice.

Comment by Luke Blanchard on August 23, 2010 at 5:45pm
I think way back when I read a response by Robert Kanigher in a letters column in which he said he'd long since decided Rock and co. wouldn't survive the war, since it would ruin the realism of the series. It might've been in Sgt. Rock #368 or #374. (Right now those are the only two issues of the series I can remember reading.)

Comment by Captain Comics on August 23, 2010 at 6:27pm
Now that you've jogged my memory, Luke, I believe you're correct that the meme was established by Kanigher himself, although DC opted to go a different way. Perhaps Commander Benson would know more.