Dec. 28, 2010 -- Graphic novels and reprint collections came in an avalanche at the end of 2010, capping the best year in history for comics you can put on your bookshelf. That’s worth a column in itself, but who’s got time to do industry analysis when there’s so much great stuff to review? 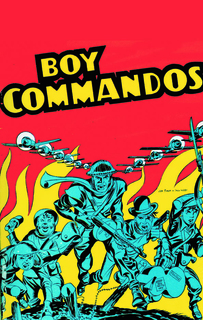 Great stuff, for example, like Boy Commandos Volume One ($59.99) from DC Comics. Commandos came from the creators of Captain America, Joe Simon and Jack Kirby, the two marquee names in comics in the 1940s and ‘50s – names so big that Titan Books is in the middle of publishing a library of their work.

One reason they were so big was their tendency to create genres, like “kid gang” comics, of which Boy Commandos is an example. But you won’t see this strip in the Titan series on Simon & Kirby, because it’s owned lock, stock and trademark by DC. The only way you can see it is in this reprint series.

Which is no burden – Boy Commandos is worth savoring on its own.

Commandos features four kids from countries at war with the Axis – boys from Holland, France, England and Brooklyn, the latter boy based on Kirby himself – who were led into combat by a generic (and usually absent) adult named Rip Kirby Carter. Why these children are allowed to go into combat is never addressed – but neither is the physics of Superman flying, and we all accept that. In other words: Suspend your disbelief. Just enjoy the stories, because they are far better than they have any right to be.

Perhaps I’m just surprised to see an early 1940s series that didn’t rely on formula. But each story shines on its own, unique within the overall structure. Some stories were mostly comedy, some allegory, some downright grim, and some only peripheral to the main concept – sort of like “The Spirit,” only with kids in fatigues instead of a detective in a mask.

The art, of course, is the best of its era. As all comics fans know, “King” Kirby virtually invented the visual language of comics. He was not only miles ahead of his 1940s contemporaries, he is still the Jedi Master to many of today’s padawans. 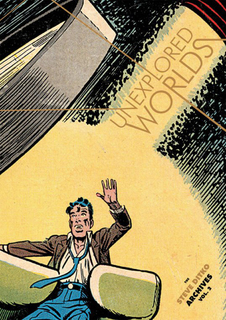 Speaking of comics masters being awarded their own libraries, the second volume of Blake Bell’s series on Steve Ditko has arrived. While the first volume focused on Ditko’s work before the disastrous Comics Code of 1954, Unexplored Worlds: The Steve Ditko Archives Vol. 2 ($39.99) picks up immediately after, with a representative selection from the artist’s prodigious output in 1954-55 (with occasional commentary by Bell).

While there is no question that Ditko is a unique artist who expanded the frontiers of what is possible in comics, you won’t see much of that here. In fact, it’s kinda repetitive and boring. That’s not Ditko’s fault, of course – it’s the fault of the aforementioned Code, which reduced comics to pap virtually overnight. All 1950s comics creators spent years trying to figure out how to tell interesting stories despite the chains, ball-gag and blindfold of the Code. Suffice to say, Ditko hadn’t figured it out yet in 1954-55, and these short “suspense” and SF stories are as bland a period as this artistic giant ever had. I don’t have a clever segue into Brightest Day Volume One ($34.99, DC Comics), but this book is clever enough to provide its own. Brightest Day is a 26-issue, twice-monthly series that has spun off the successful “Blackest Night” superhero horror story, but has little to do with that. It’s not even all the “bright” – in places, it’s a pretty dark story on its own.

What Brightest Day is really about is second chances. Or maybe third, fourth or fifth chances. Specifically, it’s about 12 characters who were deceased, but have returned to life for mysterious reasons they slowly discover. Metatextually, it’s about second-banana characters who have failed repeatedly to hold their own titles, given yet another chance to gain reader interest and loyalty.

Can characters like Aquaman, Firestorm, Hawkman and Martian Manhunter ever succeed creatively and financially? So far, Brightest Day is proving they can. I’m enjoying the nostalgic vibe of these characters, whose greatest successes were in the past, but I’m also interested in how writers Geoff Johns and Peter Tomasi are developing them for the 21st century.

Good for them – and good for us!

The adult leader of the Boy Commandos was Captain Rip Carter, not "Kirby".

That one is easy to figure.  Jack Kirby figures in this series in a big way, so his surname is on the brain.  Conjunct that with "Rip Kirby", the long-running P.I. comic strip created by Alex Raymond, and flying fingers are going to type "Rip Kirby", even while the active brain is saying "Rip Carter".

Those are the most irritating mistakes of all for me---when I know better, I know what the right term or name or punctuation mark is, but it's that precise moment when the subconscious part of my brain decides to stick its tongue out at me.

By the way, I've read my fair share of Boy Commando stories, and everything Cap has said about them is spot on.  It's the most satisfying of the "kid gang" series of the day.

Comment by Chris Fluit on January 2, 2011 at 5:14pm
I'm glad you're enjoying Brightest Day, Cap.  I remember a poll a year or so back asking which second-tier character Geoff Johns should revise next.  I'm happy that he decided to tackle a bunch of them in an anthology series instead.  It's been a great read so far.

I will be picking up Boy Commandos this week as I always enjoyed their reprinted stories from the 70s, epecially their two-issue series from that time!

"The Commandos Are Coming!"

Yikes! Thanks Commander! It's too late to change "Kirby" to "Carter" in most places, but I can fix it where I have access.

Next week I think I'll write about Sandman and his partner, Simon the Golden Boy.

I hadn't realised it before, but Brightest Day is following the 52 template, isn't it? A disguised anthology, released over a year, showcasing the second-stringers, and used to address the underlying structure of the universe they are in (and featuring Johns as a writer).

As for building up those characters to make them more viable, only Black Adam became a big star after 52, but was kinda big before it, and then way overexposed as a villain for too short a time, Booster Gold acheived moderate success, and the rest fell by the wayside really.

I doubt Brightest Day would be to my taste, but I'm glad that they are reusing the template.  DC heroes don't have to be huge stars, just be good ensemble characters in interesting stories.

And I don't think Johns and his Green Lantern sidekick are going to provide the same exciting and quirky mix of styles that Rucka, Morrison, Waid and Johns provided.

Neither Brightest Day nor 52 fit the description of "Disguised anthology."

Both series have a consistent cast of characters (plus occasional guest-stars), whose stories we get to see played out over the year. We don't (usually) see all 12 in an issue, but all of the stories have crossed each other. The effect is much more like the TV shows Heroes or ER than a true anthology.

I meant that 52 had 5-6 ongoing stories being told between 2 covers which only interacted a little bit - the 'disguise'.

As a former reader of 2000AD, which told the ongoing stories of several heroes between the covers of a single weekly comic, I was focusing on 52's similarities with it.  Whereas 2000AD's tales were seperated by being in discrete chapters and set on different fictional worlds or times, 52's weren't.

I'd imagine Brightest Day is less diffuse, being steered by one writer with a huge commitment to tying everything together.  In theory I love the idea of such a huge story with a huge cast of lower rung superheroes - who are therefore potentially more interesting and with higher stakes in their stories, but I don't think this particular story is for me.

As they are similar projects, I'd love to have been in the room when the creators of Brightest Day chewed over what went right in 52 and what went so horribly wrong in Countdown, and I wonder how they applied those deliberations to Brightest Day?

Not tying into a load of other comics was one of the things that made 52 special, so I wonder how Brightest Day is doing on that front?

Also I've just noticed that the titles of all these tightly scheduled comics - 2000AD, 52, Countdown and Brightest Day have a 'chronological' theme, to do with measuring out time...

I see what you mean now.

Not tying into a load of other comics was one of the things that made 52 special, so I wonder how Brightest Day is doing on that front?

BD is doing fairly well in being mostly crossover-free. There have been several scenes in BD that have also appeared in another series, like a Green Arrow/ Martian Manhunter piece, shown from a slightly different perspective. For the most part though, the rezzed characters that BD is centered on have stuck to BD. The exceptions have been those characters that have their own series to be featured in (Reverse Flash and Capt. Boomerang in Flash, Max Lord in Justice League: Generation Lost, Dove in Birds of Prey, Osiris in Titans), who tend to stick to their "home" title, and rarely appear in BD proper.

I think DC has made up for the missteps of Countdown with this series.