It's official: A previous Captain America is coming back, and it's Steve Rogers. Here's Marvel's press release, complete with the three (so far) covers. Let me know what you think about this, Legionnaires.

New York, NY (June 15, 2009) –It was the shot heard ‘round the world. Following the most shocking and controversial event in comic book history – the assassination of Captain America in the pages of Captain America #25 – neither the heroes of the Marvel Universe nor the rest of the world have quite come to grips with this most traumatic of losses. From the moment he was taken from us until today, one fact has proven to be true: the world still needs Captain America. And now, the time has come! At long last, the legend, the hero, is back. Steve Rogers makes his triumphant return from the grave in the publishing event of the year: Captain America Reborn, a five part series from Marvel Comics beginning this July.

Long seen as the world’s greatest hero, Captain America made his first appearance in March, 1941, boldly fighting the Nazis in World War II. As a symbol of true patriotism, his popularity soared during the war as he became a nationally revered icon of US efforts to spread freedom around the globe. Serving as the Sentinel of Liberty for nearly 70 years, Cap embodied the spirit of the American people and became one of the world’s most beloved and recognizable characters. His death rocked the entire world, real and fictional, and his return from the grave promises to be a landmark event as well.

The recipient of two Eisner Awards for his tale about the life and death of Captain America, Ed Brubaker joins forces with acclaimed Ultimates artist Bryan Hitch for the landmark Captain America Reborn series. This partnership promises to produce the visually arresting, action packed story that fans around the world have been eagerly anticipating.

A story that captured international attention, Captain America #25 polarized shocked audiences by starkly depicting the murder the cultural icon. On that fateful day when shots rang out on the courthouse steps, Cap’s greatest enemy—the Red Skull-- achieved his greatest ambition—or so it seemed. Since that time, the Marvel Universe has been in chaos, as as the Red Skull has worked towards his true endgame. But now there is a ray of hope in the form of Steve Rogers! 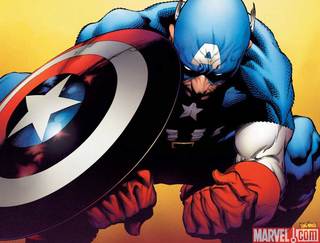 How can Steve Rogers return from the dead, and will his rebirth be enough to stop the global threat of his sworn enemy? Hitting shelves on July 1st, the special five part series Captain America Reborn finally reveals the true scope of the Red Skull’s nefarious plan, and begins Captain America’s triumphant return.

Comment by Cavaliere (moderator emeritus) on June 16, 2009 at 2:33am
"Let me know what you think about this, Legionnaires."

I think it is too soon. I thought that maybe this one time a death would mean something. By bringing him back this soon, it cheapens the death. And as I wrote in a different thread, James "Bucky" Barnes just hasn't been given enough chances to shine in the role yet.

Comment by Figserello on June 16, 2009 at 3:35am
I agree 100% with Cav. The MU dealing with the death of its (possibly) greatest hero is a more interesting place than one where it's been reinforced again that death aint all that...

I too feel that there were plenty more stories to tell about the Rogers-free MU, including Bucky's growth and development.

Comment by Doc Beechler (mod-MD) on June 16, 2009 at 7:16am
Man...this just screams out for a Dick Grayson/Bucky team-up story given they're both wearing their mentors' uniforms now...

Comment by Figserello on June 16, 2009 at 9:09am
Strange that its only 5 years or so since Bats and Cap bonded together over their respective lost partners.

Comment by Rob Staeger (Grodd Mod) on June 16, 2009 at 1:44pm
I think the stories in the wake of the death have been some of the most compelling Captain America stories ever -- but I trust that Brubaker and the artists involved won't let up once Steve's back. It *does* feel a bit too soon to me -- but that's only because these stories are working so well. Let's see how we feel three years from now if Dick Grayson is still Batman. Will it be "too soon" for Bruce to come back then? Despite the talents of everyone involved, I kinda doubt it.

Marvel has done an amazing thing with this stunt. They've killed America's greatest hero and made us thank them for it.

But Captain America's "death" sells comic books. It makes the newspapers (as did Batman's and Superman's "deaths".) And the return sells comic books. And DC and Marvel are so very desperate to sell comic books these days that they'll do most anything to get 'em out. (Joe Quesada and Dan Didio are running the two biggest comic book companies... and yet, no one has spoken out against this yet? Personally, I think they both suck at it.) Killing off a main character - one that EVERYONE knows will be slated for resurrection - is a desperate way to sell a comic.

Oh, and here's a spoiler, kids - if you didn't know it - BRUCE WAYNE IS NOT ACTUALLY DEAD. HE WILL BE BACK. Go ahead and take me to task for that one, now... :)

Comment by Rich Lane on June 17, 2009 at 9:27am
Personally, I think they both suck at it.) Killing off a main character - one that EVERYONE knows will be slated for resurrection - is a desperate way to sell a comic.

As long as the story is good, and in this case the run-up has been outstanding, I don't see any problem with it. We know he's going to return. So? We know Superman is going to beat Luthor, Batman will escape the Joker's death trap, and the Ben Grimm will never permanently regain his humanity, but no one who reads comics regularly complains about Superman battling Luthor AGAIN, Batman being put in an inescapable death trap AGAIN, and Ben Grimm regaining his humanity AGAIN.

There are status quos that must be maintained for a hero to remain viable, so if a creative team can work around those and produce something compelling I'm all for it.

Comment by Rich Lane on June 17, 2009 at 11:52am
Man...this just screams out for a Dick Grayson/Bucky team-up story given they're both wearing their mentors' uniforms now...

That would be fantastic, wouldn't it?