That’s the best description for Sandman: The Dream Hunters (DC/Vertigo, $24.99), a hardback collection of the recent miniseries written by Neil Gaiman and illustrated by P. Craig Russell.

Gaiman is the award-winning author of a jillion award-winning works, from the original Sandman comic-book series, to the BBC miniseries Neverwhere, to Coraline, recently made into an animated movie. Russell is the award-winning, Raphael-esque artist who has gorgeously adapted to comics numerous operas (including Wagner’s epic Der Ring des Nibelungen), Oscar Wilde fairy tales, Michael Moorcock’s Elric and even a superhero or two.

They are magical creators individually; put them together and words fail me. It’s just breathtaking.

For the record, Dream Hunters is the story of a fox spirit who falls in love with a monk in feudal Japan. While not a real fable – Gaiman made it all up – it reads as one, both charming and chilling as love brings two souls together, but dark magic drives them apart, revenge is taken, heartbreak ensues and lessons are learned. In the end, The Sandman (here called the King of All Night’s Dreaming) reflects: “Events occurred as it was proper for them to do. I do not perceive that my attention was wasted.”

That’s similar to what this reader was thinking as well, although somewhat less lyrically. And a lot more breathlessly.

Note: Some may recall The Dream Hunters being released as a novel about 10 years ago, with illustrations by famed Japanese artist Yoshitako Omano. Gaiman himself says in the Afterword that the comics adaptation is meant to complement the novel, not replace it. And it does. 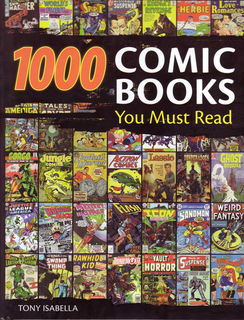 * The title 1000 Comics Books You Must Read ($29.99, Krause Publications), by comics writer and Comics Buyer’s Guide comics reviewer Tony Isabella, is a bit misleading. Which the author cheerfully admits in his Foreword.

Or as he responded when approached to write the book: “JUST a thousand?” So Isabella made only token effort to justify the name, and instead takes the opportunity to ramble through eight decades of comics history, writing brief information or commentary on important books, oddball titles or just personal favorites.

It’s a fun tour (and a quick read) by a guy who’s been this way a few times before and knows the good bits. (Full disclosure: I am a contributing editor at CBG.)

* You Have Killed Me ($19.95, Oni Press) is a treat for fans of noir movies and books. In fact, as one follows the treacherous storyline, full of seductive women and tough talk and mistaken identity and back-room gambling dens, one is frequently reminded of Dashiell Hammett and Raymond Chandler, Chinatown and The Grifters.

In true noir fashion, our hero is a gumshoe down on his luck, despised by the cops and hired by a slinky dame with gams down to there. What follows is delightful ride through the usual noir elements -- which I won’t reveal, because the players (and author Jamie S. Rich and artist Joelle Jones) don’t show all their cards until the final pages. And I wouldn’t want to spoil the fun. Get me?

* The Time Tunnel lasted only one season in 1966-67, and the same-named Gold Key comic-book spin-off lasted only two issues. But the short collection of those two issues ($19.99, Hermes Press) kicked off a lively discussion on my Web site about the literary conventions that have grown up around time-travel fiction – and how Irwin Allen’s short-lived show didn’t adhere to any of them. 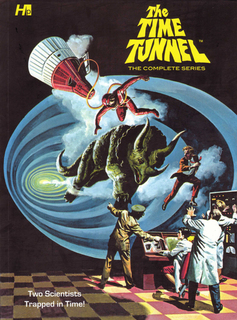 Piffle. How can anyone “know” anything about a fictional science? The Time Tunnel writers just had fun with the concept, constantly landing our travelers at pivotal moments in history because, well, it was fun. And they didn’t worry overmuch about why history never mentioned these guys at Lincoln’s assassination or whatever. Or how they ate or slept. Or how their clothes got laundered. They just had fun.

Not fun enough, though, for either the show or the comic book to last very long. But the Hermes collection is a gentle romp through pseudo-science of another age, when fun didn’t have so many rules.

Comment by Travis Herrick (Modular Mod) on October 23, 2009 at 5:11pm
I read "You have Killed Me", and what I said then was I found some of the dialogue clunky, but it was enjoyable.

Comment by Captain Comics on October 23, 2009 at 5:54pm
If I was twittering a review of You Have Killed Me, I would have boiled it down to "It doesn't veer in the slightest from noir formula, but since I like the formula I didn't mind." Everything in it seems lifted from somewhere else, which would include, I imagine, dialogue that read more comfortably in its original context. That's just a theory, and I don't mean to slam it too hard because I did enjoy seeing familiar characters run through familiar paces.

Comment by Jeff of Earth-J on October 28, 2009 at 4:14pm
I bought the first issue of the periodical version of The Dream Hunters and decided to traitwait (giving the first issue to our friend's teenage daughter), but thanks for the reminder. bought the collection today.

I might not have given 1000 Comic Books You Must Read a second look if I had not previously read your review. It looks really fun! Tell Isabella he owes you a sale.

I've already read the Time Tunnel collection (as you know). There is also a collection of Voyage to the Bottom of the Sea comics, and I noticed today in the latest Previews catalog that a hardcover collection of the complete (five issues) Land of the Giants comic book series has been solicited for January release. FYI...

Comment by Captain Comics on October 28, 2009 at 4:45pm
I reviewed "Voyage" volume one a while back, and have volume two on order. Ditto "Land of the Giants.' It looks to be an interesting couple of months in reprints coming up!