A little explanation is in order for these posts - I'm in the process of clearing out some old GNs before a move, and I thought it might be fun/interesting/egotistical of me to give my thoughts on them as I start to set them aside. Many of them are collected books of famous (or in some cases infamous) runs, so join me if you wish as we delve into the volumes before they go to a new home. 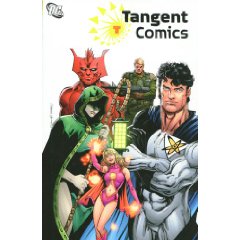 We start with an experiment DC carried out in 1997. At that time, I wasn’t really collecting books, so I missed the original printings of the Tangent books. To quote Dan Jurgens, who was the prime mover behind the books:-
“What would happen if we took the names of DC’s characters and imagined them anew, with no connection to what came previously? On top of that, what would happen if we created an entirely different earth for them to inhabit – one with political, scientific and developmental differences from our own, accurately reflecting the presence of superheroes?”

What Jurgens had in mind here was not a re-run of the ideas that led to Watchmen, but rather to try and install the same sense of fun that Julie Schwartz had when he re-vitalised the DC heroes’ line starting in 1956. With that in mind, Jurgens worked with Eddie Berganza on the concept and ideas. With the recent Infinite Crisis, and the establishment of the Tangent world as one of the 52 Earths in the DC Multiverse, the series was reprinted last year in three volumes, and it’s these I want to look at over the next few days.

The Tangent earth is one where, in 1963, the Cuban missile crisis was not resolved, but instead led to a nuclear conflagration that took out Florida and much of the South-East USA. Atlanta was destroyed, and a city called New Atlantis rose from the ashes as a new world order took over. Behind the scenes, however, a shadowy organisation known as Nightwing is manipulating people and events to their own purposes.

It was into this world that first batch of Tangent Comics appeared in 1997. Let’s look at the first five. 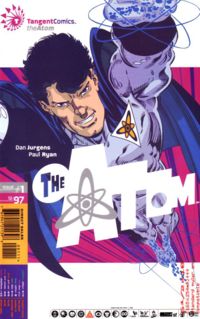 Created by Dan Jurgens and Paul Ryan, the person we meet here is actually the third person to have that name. His grandfather, the first Atom, gained his powers as a result of experiments on soldiers who were exposed to atomic bomb explosions. He had tried to stop the missiles in 1962, but was apparently too late to stop the first ones landing. Intercepting and disabling the remaining missiles, he was hailed as a national hero and feted by society and business alike. Some years later, he disappeared as war broke out in Europe, only to be found on the moon where he was raising a family. His son, the second Atom, was killed by a group of villains, and in turn his son has come to seek vengeance.
The tale introduces the Tangent world, and clearly establishes the differences that have arisen as a result of the Atom’s arrival. Unlike the world of the Watchmen, this is one where hope seems to be prevalent, but something dark lurks beneath the surface. As two generations of the family meet, and secrets are revealed, it becomes clear that this world is built on a bed of lies – and those lies may come back to haunt them.

My feelings about this issue are mixed – I like the concept of a generational family of heroes, but it feels like the story was written to establish the world more than the man who is The Atom. 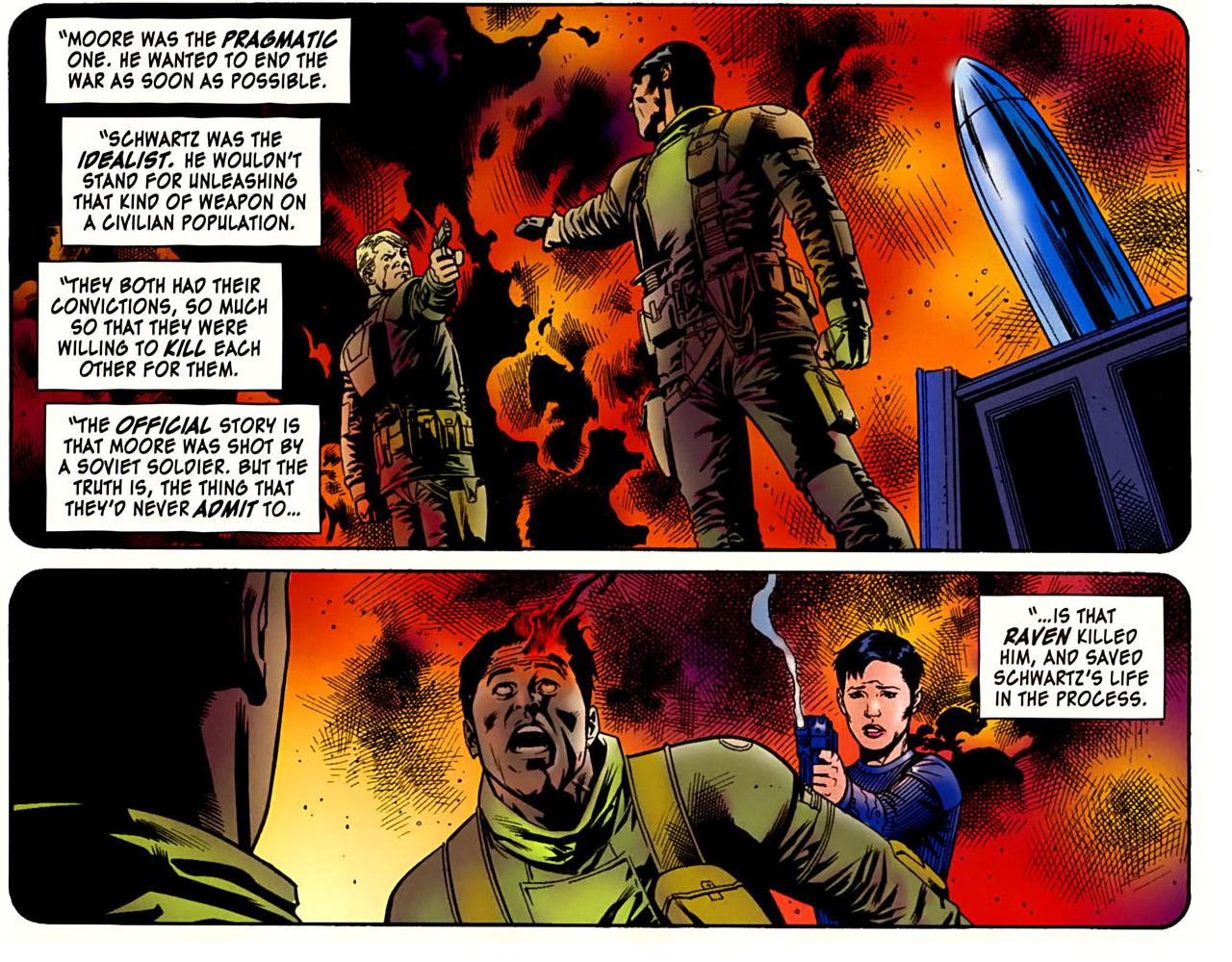 In the first book, we meet President Schwartz of the United States (named in honour of Julie Schwartz I imagine), and hints are dropped that there are links between him and the people on charge of Nightwing. This story by Ron Marz and Mike McKone gives the back story, as in an interview with one Lori Lemaris of World’s Finest magazine President Schwartz tells the story of the military detachment he worked with the 60’s – code named the Metal Men.
Here we learn that the 1968 invasion of Czechoslovakia led to a full scale war between the US and the Russians – one in which chemical warfare in the form of the Red Tornado virus played a devastating part. Schwartz was one of a group of six, sent in to retrieve an unexploded warhead and return it for examination from the Resistance.

The book itself actually reads like a standard war comic of the 1970’s, but the devil here is in the detail, as we meet the members of Schwartz’s team – all of whom in future years will have a part to play both in the government and in Nightwing. They also all have a part to play in the future of their world… 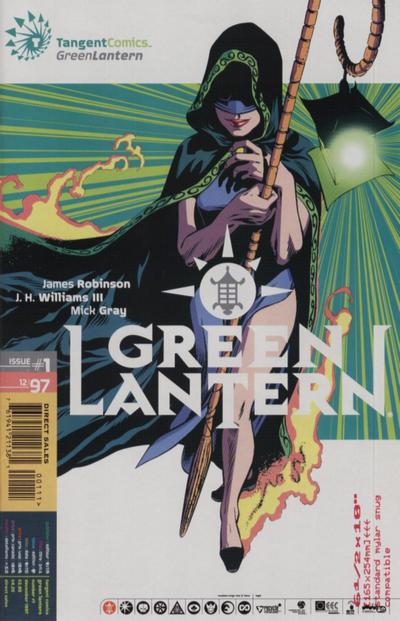 This has to be my favourite of the new concepts. Here, the woman known as the Green Lantern has the ability to grant departed souls time in this world, either to right wrongs done to them or else to provide closure to their lives. The three stories here, by James Robinson and J H Williams, fill in some of the details of the man known as Captain Comet (briefly mentioned in the first two books), allows crime writer King Faraday to file his last story, and tells the tale of the latest recruit to the air troupe led by Captain Boomerang as he discovers his links to their leader.
Williams is justly famous now for his art, and this early example shows both his versatility and his attention to detail. The idea of a spectral being who can grant a soul resolution is intriguing, and open to many possibilities – some of which are explored later in other books. In and of itself, however, this is easily the best of the books in the first volume.

This, on the other hand, is downright fun. Although it’s not discussed in the intro to the book, this Flash seems to owe a lot to the concept for a new Flash that was around at the time Crisis on Infinite Earths was published – a woman capable of using light as a weapon and a power. It expands it further by making Lia Nelson a being made of light energy - a result of unknown influences on her parents during a space mission. She is now capable of moving at the speed of light, using light to make constructs and fight – but mainly she’s a young girl who wants to have fun, and that’s clear in Tony DeZago’s writing and Gary Franks’ art.
Even here, however, the influence of the Nightwing organisation is felt, as they try to capture Lia for their own ends – with varying degrees of catastrophic failure.

So most of the South-East US was destroyed in the nuclear conflagration, with New Atlantis arising on the new shoreline where Atlanta once stood. What happened to the sea creatures that occupied those waters? They mutated, took over the sunken cities and land – and became the rulers of a clan-based society that grew up in the ruins. When their existence is threatened by mankind, a group of young denizens who are attracted to the life above water join together as the Sea Devils, and their leader (the son of the chief known as Redfin) seeks help to stop a behemoth that threatens all.
The work of Kurt Busiek and Vince Giarrano, this book also shows the effect that the new world has on the creatures below the surface – with no Aquaman to lead and guide, they form a society not unlike our own, with the same mistrusts and fears, and the two interact warily and, in the case of the governor, badly.

Although published as a set of one-shots for a “fifth week” event, the ideas expressed here had an influence beyond the dreams of their creators – one that would lead to more stories, of which we will learn next time. Reading them some twelve years later, they are good examples of what DC was like at the time. The use of familiar names in new circumstances, and the conscious decision to leave the “Big Three” out, means this is a world with an identity and character all its own – and much the better for it.

Comment by The Baron on September 16, 2009 at 9:41am
I liked the Tangent books. Of the ones you mention here, Flash was my favorite.

Comment by Travis Herrick (Modular Mod) on September 16, 2009 at 11:55am
Man, it has been so long since I read these, I had forgotten about the backstory. I haven't read any of these since they first came out. I do remember enjoying Green Lantern the most.

Comment by Mark Sullivan (Vertiginous Mod) on September 16, 2009 at 12:05pm
I collected all of these and read them a couple of years after the fact. I don't remember much beyond enjoying them to varying degrees--kind of nice to get DC-style storytelling without any continuity baggage. I enjoyed a lot of the Elseworlds in much the same way.