At the end of the second volume, which printed the first of the 1998 issues of the Tangent comics, it was obvious that something had gone terribly wrong in the world. In the third and final volume, we learn just how bad things have become – but not before meeting some more major characters. The first of these gives a radically different take on one of the major DC characters. 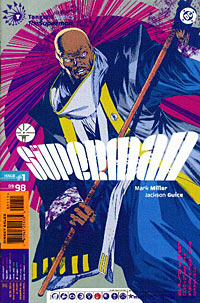 For what ever reason, I like Mark Millar’s take on superheroes, and this re-imagining of the most powerful man in the world with art by Jackson Guice pulls no punches. We open on Harvey Dent, a New York cop who one day takes a dive off a skyscraper while handcuffed to a suspect t- and survives with barely a scratch. As time passes, he discovers he has advanced brain function and abilities, but at the same time he becomes estranged from humanity and especially his wife.

Eventually, with a little help from one Black Orchid, he learns that he was actually the result of an experiment in a small town called Viecroy, SC – where a scientist named Joe Chill introduced a chemical called Miraclo into the water supply, to see if an army of super beings could be created.

Anyone familiar with the story of Tuskegee can imagine what happened next and we are left wondering how Dent, who now goes by the name of Superman, will deal with the news that he was the only survivor. The answer is short, sharp and not nice – and in the closing scenes he visits his wife with an offer – leave him or take Miraclo, which he has made “safe” and join him. It would be some time before we learn the answer to his question, as the electromagnetic pulse hits New York.

This is a bold diversion, and sets up some interesting possibilities for future stories. The art by Guice is realistic, with the historical session presented in washed out colours that match the mood. Worth looking at.

If that was a radical re-think, however, Peter David had something even more extreme in mind.

An alien spaceship crashes on New Atlantis, and Lori Lemaris is on the scene to report as a female being emerges. Calling herself Wanda, she listens as Lemaris asks “Why are you here?” The most dangerous question in the world, as it turns out, as another being called Woozy appears and says eh can explain everything while Wanda – thinks.

Peter David and Angel Unzueta create a unique premise here – a being created to unite a divided world, but instead imbued with such power that whatever she thinks or decides should happen, will happen. In other words, if Wanda decides something never happened, or someone never existed, if she even wonders about it and decides – it will happen.

Thus, as Woozy says, “It behoves you to treat her properly, because to fail to do so could have serious consequences. Seeking her out could be – hazardous.” Just how hazardous we discover later. Meanwhile, however, the mystery of what caused the pulse is about to be revealed.

John Ostrander and Jan Duursema return to their characters, but first we meet the Doom Patrol as they attempt to make contact with an organisation known as Meridian, while trying to run from Nightwing. When the attempt by Night force to capture them fails, due to the intervention of Obsidian and Jade, the powers that are behind them decide to send in a small force to get them back from Russia – the Night Force led by Gravedigger.

As both teams meet, and discover the true leader of Russia, we rush headlong into a nightmare as the Doom Patrol are forced to become part of an experiment – one that leads to the creation of a new being known as the Ultrahumanite, the destruction of some of the combined forces, and the unleashing of the electromagnetic pulse that sends the world into a dark age.

Thus, the setup is complete for the next stage of the Tangent world – but not before we have a little fun first. 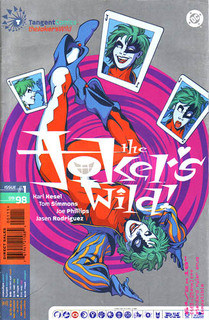 Elsewhere….. In New Atlantis, Officer John Keel has a problem with the new Omegatech Mechanoid Armoured Cop – one that ends with the intervention of The Joker. As the pulse hits, and in the process sends The Atom hurtling to the ground, only one person can come to the aid of the city – but who is The Joker and can she really help when a group calling itself the JLA come to claim The Atom?

Karl Kesel and Tom Simmons return to reveal more of the secrets behind the woman – or is that women – behind the harlequin, as well as setting up other questions. For example, this is not the JLA we may be familiar with, so who are they and who is behind them?

Meanwhile, on the west coast….

The Trials of the Flash 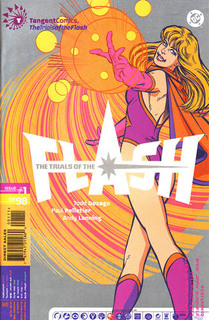 Todd Dezago and Paul Pellitier continue with the story of Lia Nelson, as her father once again fails to capture her and Nightwing send in the heavy hitters – Plastic Man. But he is a member of the Secret Six with Flash – so what’s going on here?

The timing places this parallel with Night Force, as at one point Atom wonders what the Doom Patrol are doing in Russia. It’s an interesting diversion, but to be fair not as good as the first Flash tale.

The next title, however, is as good as the original

Tales of the Green Lantern 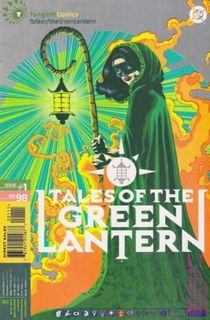 So what is the true origin of the woman in Jade? Like the classic Secret Origins issue featuring the Phantom Stranger, this book offers three possibilities – some, one or all of which could be true.

Dan Abnett, Andy Lanning and Mike Mayhew present the tale of Lois Lane, an adventurer murdered by one Booster Gold when she discovers the truth behind the waters where Florida once stood, but who returns to exact revenge?

Or is it another story by Abnett and Lanning, illustrated Georges Jeanty, where a witch in post-war Czechoslovakia sets up her sister to pay the price for her crimes, only for her to return from the grave and seek retribution?

Perhaps it is the tale by John Ostrander and Ryan Sook, where Zatanna, daughter of darkness, seeks to retrieve an ancient green lantern for the Dark Circle, only to discover a higher calling?

James Robinson isn’t saying, but all three tales are little masterpieces of storytelling. After all, what is not important is the origin, but what comes next. 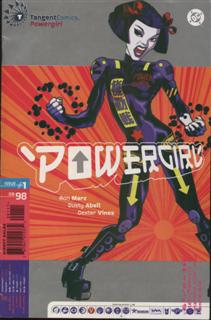 So what are the Chinese up to? Creating their own super powered being – and President Schwartz wants it stopped. He sends in a team of three – his wife, his chief of staff and another former member of the Metal Men. What they discover, however, is associations with Nightwing and Meridian – and a new form of life that wants no part of their fight.

Ron Marz and Dusty Abell bring a style to the story that seems part Manga, part satire, but I have to confess this is the least favourite of the stories in the book. The art seems rushed and somehow incomplete. Maybe it’s just me, but I sense this could have done with more care. 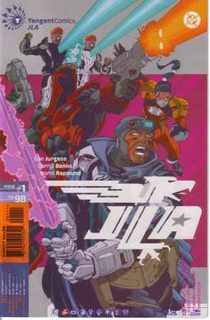 That’s the Justice League of America, but these aren’t the good guys. They’re a collection of super beings, or “Ultras” who want to stop the damage caused by the other heroes by bringing them down by any means necessary, and they have some high powered backers.

Their first task – take down the original Atom to show that they mean business. After they succeed, they split up to take on one hero each while the Secret Six fall in battle. The Question, an assassin who killed the Atom, is sent to neutralise Green Lantern; The Human Target is sent to New York; The Vigilante to end the life of The Batman; and Johnny Double, who can split into multiple bodies, to take down Wonder Woman.

As the story by Dan Jurgens and Darryl Banks unfolds, we learn of the people behind the JLA, as their targets defeat their would be killers and join together (in the case of Green Lantern, a special emissary) to fight this group.

And there the story ended. On a personal note, with some exceptions (namely Green Lantern and Wonder Woman) I didn’t enjoy this set as much as the original run. At any rate, they stayed hidden until the Infinite Crisis, when it was revealed that they lived on Earth-97, and they survived as one of the 52 new earths in the multiverse that was created.

Since then, they have recently appeared in the 12 issue series Tangent: Superman’s Reign, which I intend to look at in the not too distant future. For now, we leave them as I turn to another cook soon to go from my collection – one that caused a lot of controversy at the time…

Comment by The Baron on September 23, 2009 at 10:04am
The Tangent Wonder Woman was my least favorite of the Tangent characters - I didn't like the look, and I'm not wild about characters who can think things into or out of existence.

Comment by Don Collett on September 23, 2009 at 11:47am
I wasn't a big fan of the Tangent Wonder Woman either, but the re-thinks on Superman and Batman were enjoyable. I didn't like being left hanging at the end of Tangent/JLA; I wanted to know what would happen next!

I'm not wild about characters who can think things into or out of existence.

Isn't that your purview anyways?

Comment by Figserello on September 24, 2009 at 2:10am
For what ever reason, I like Mark Millar’s take on superheroes

Comment by Mike Williams on September 24, 2009 at 5:31am
You may have a point there - as was documented elsewhere, I'm about the same age as Millar and one Grant Morrison, and from a very similar background.