That’s the central issue in a new book by clinical psychologist, psychotherapist, textbook writer, book author, lecturer and certified hypnotist Robin S. Rosenberg, PhD. What’s the Matter with Batman? An Unauthorized Look Under the Mask of the Caped Crusader applies professional criteria to the questions that have always swirled around the sanity of a man whose response to tragedy has been to dress up like a flying rodent.

She is also a major Bat-fan, given that she is conversational with terms like “the Dick Grayson era” of Robin, and can explain in depth the differences between Batman’s 1939 origin in Detective Comics #33 vs. his origin in the 2005 film Batman Begins.

So, back to the book: Is Batman crazy?

Well, first, Rosenberg was quick to tell me in a phone interview that psychologists “don’t actually use the term ‘crazy,’” preferring phrases like “diagnosable disorder.” (I assume “nutso,” “bonkers” and “taking the cray-cray train to Koo-Koo Town” are equally off limits, but was afraid to ask.)

Secondly, we have to establish which Batman we’re talking about. There have been a lot of versions of Batman, from Adam West’s campy TV turn to Frank Miller’s aging, ultra-violent Dark Knight Returns. It turns out Rosenberg examines more than one version of Batman at once.

“I focus on an amalgam,” she says. “Basically what I was trying to do was find, in any version, enough symptoms of various disorders.”

So is Batman crazy? Well, you’ve probably figured out by now that I’m not going to spoil the book by telling you what Rosenberg concludes. Instead, I’ll regale you with a few of Rosenberg’s Bat-impressions from our interview:

Is Batman messianic, thinking he is so necessary for Gotham?

“In the film Batman Begins," Rosenberg said, “Gotham City … is basically a mess, and the Gotham police [have] not been able to fix it. So if [Bruce Wayne] can fix it, then he’s justified in his messianic beliefs. … it’s an accurate self-assessment.”

Isn’t his anger a problem?

“Anger can be a very powerful motivator,” she said. “Anger in and of itself isn’t a bad thing. When people who end up becoming doctors or cancer researchers have been motivated because that they were angry that a loved one died of cancer, does that make anger bad? No. … It’s OK to be angry. It’s really important being in control of it … to make it work for you, versus working against you.” 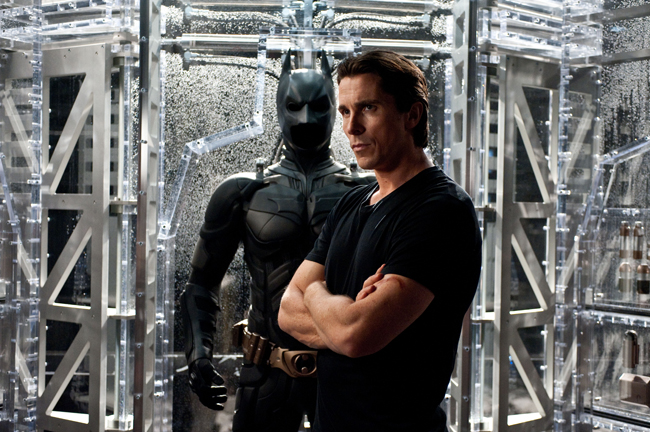 In Batman Begins, it’s implied the Bat-mask is a totem of sorts. Is it?

“I think partly it just depends on the wearer,” Rosenberg said. “[Bruce Wayne] chose the bat, it’s not simply a mask that he’s putting on. It’s a meaningful mask, so it may be when he puts it on there is a totemic-like aspect wishing to imbue himself certain bat-like characteristics. I mean, if he were wearing a princess mask, he might feel a little differently!”

What’s your opinion of the Christopher Nolan films, from a professional psychologist’s perspective?

“Christopher Nolan, Jonathan Nolan and David Goyer … are really good lay psychologists. In Batman Begins … I thought it was absolutely brilliant to have Bruce Wayne as a young child be an anxious and fearful kid, temperamentally. We know a lot about anxious and fearful temperament and here … he fell into a cave of bats and was traumatized by that, and then he goes to the opera [which] has people dressed as bats going up the walls of the stage, and he has a panic attack. And having that … was absolutely brilliant, because that’s the part about his guilt. … He understands that if he hadn’t had the panic attack his parents wouldn’t have ended up in the alley with Joe Chill.

“And they had him master his fear by the technique called exposure, where you expose yourself to what you’re afraid of in a controlled way. And that’s the totem of him taking on the bat as his animal costume. It added a whole other veneer to the Batman mythos, the meaning of his becoming Batman. I thought that was absolutely psychologically brilliant.”

Finally, I had to ask her about a recent Playboy interview, where long-time Bat-writer Grant Morrison made the startling claim that “gayness is built into Batman. I’m not using gay in the pejorative sense, but Batman is very, very gay. There’s just no denying it. Obviously as a fictional character he’s intended to be heterosexual, but the basis of the whole concept is utterly gay.”

I’m not sure exactly what Morrison meant by that, since he also wrote Batman as a heterosexual. And my own opinion is that when people see gay dog whistles in Batman comics it says more about them than it does Batman, whose adventures were originally aimed at pre-adolescents.

As it happens, Rosenberg seems to agree with me. She dismissed the homosexual charge in her book, saying “writers of Batman stories have stated they wrote Wayne as a heterosexual character.” So what did she make of Morrison’s remarks?

“Here’s the great thing about superheroes or fictional characters in general,” she said. “They’re like Rorschach ink blots. There’s a form to the inkblot, but you infuse a meaning into it. … People bring their own perspectives to the characters, and they fill in the blanks, if you will. Like with comic panels, we fill in what happens from one panel to another. We fill in the back story or the elements of the character that aren’t provided for us. So someone who wants to see certain elements, will see those elements. And there’s not a way to refute it, because that whole point is that the information isn’t there. You’re … filling in the blanks of a structure. I think even Grant Morrison would say that, because from the lens that he is wearing that is what he sees in the blank spots. It’s what he brings [to the table]. You and I don’t see that, we see something else, because of what we bring. … That’s one of the neat things about humans, right? We’re all different!”

And some of us are crazy. But is Batman? Buy the book, and find out. And if you have any suggestions for Bat-stories that can add to the discussion, send them to Rosenberg, and she’ll include them in a second edition.

Contact Andrew A. Smith of the Memphis Commercial Appeal at capncomics@aol.com. For the full interview, see Comics Buyer's Guide #1694-95.

Good job, Cap.  You created the interest to make me want to buy the book.

Here's another one for my next library book order. Thanks, Cap!

My first question after reading the title of the book was, "Which Batman?" but your article answered that. This book promises to be as entertaining as it is educational (and vice versa). Not since Badger have I seen such a thorough ecamination of the question, "What? Put on a costume and fight crime in the streets? You'd have to be crazy!" A must-read for me. Thanks for the heads up!

I've ordered mine, too. Should arrive tomorrow.