My first comic book costume was Batman.  I was probably 10 at the time.  My mom sewed a homemade costume for me and I cut a Batman logo out of yellow cardboard.  My brother dressed up as Superman.  It’s funny how the mind can play tricks with your memory.  As we grew older, I gravitated more to Superman and my brother to Batman’s darker side.  We even reminisced a few times about the year that he dressed up as Batman and I as Superman until

(As an aside, my little sister who was 3 at the time dressed up as Cookie Monster.  She had a blue snowsuit with ping polls painted to look like Muppet eyes glued to the top.  She was so excited that my older sister had to hold her head still for the family photo.) I stumbled across an old family photo.

I don’t remember dressing up as a comic book character again until I was in college.  This time, I opted for the slightly obscure route and went as Starman.  I already had a Starman T-shirt (which everyone mistook for a 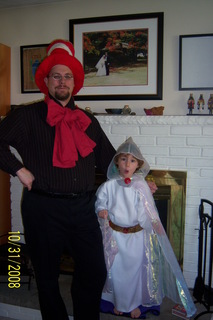 communist flag).  I used tinfoil and a broom handle to create my own cosmic rod.  Then I got a nice trench coat and some aviator goggles for the finishing touches.  The only thing I skipped was the tattoos- probably because I didn’t think of it at the time.

Most of my friends had never heard of Starman before so I had to explain my costume over and over again.  However, once I explained it, they usually nodded appreciably.  Looking back, this was a significant step forward in my life.  It signaled that I was becoming more comfortable as “a comic book geek” and I didn’t mind other people knowing.  It also showed that other people were generally more accepting than I would have guessed.

This year, I’m going out as a comic book character for the third time.

He’s one of my all-time favorite characters.  We share a Canadian heritage.  We even debuted in the same month (I was born in July 1974).  He’s Wolverine.  Or, I guess should say, “I’m Wolverine.”

I have a couple of kids now.  They’re about the age I was when I first dressed up as Batman and they’ve dressed up as comic book characters in the past (my younger daughter had a home-made Raven costume for the Teen Titans cartoon).  They’re super-excited to see their dad dress up.  They grinned with glee when they saw first the claws and then the T-shirt arrive in the mail.  I also have a very supportive wife who enjoys all of the same geeky stuff I do and bought the costume pieces at the first hint. That’s one of the things I love so much about Halloween- it’s time for us to have fun as a family.  The candy and free comics are an added bonus.

P. S. Since I mentioned it in the opening, I figured I should share my other costumes.  For science fiction and fantasy, I’ve dressed up as Harry Potter and Jayne from Firefly.  In the classic horror category, I’ve dressed up as a vampire and a zombie (a Michael Jackson Thriller zombie rather than a George Romero or Walking Dead zombie- and boy, did that incite a few arguments in the Fluit 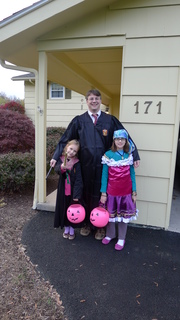 house when I was a kid).  I’ve gone as Dr. Seuss and Goofy.  I’ve gone as Caesar as a special request by my daughters who were dressing up as Cleopatra.  And, one my favorites: I put on a leather jacket to be Ed from Northern Exposure.  What about you?

I haven't dressed up for Halloween in years. I went to this really crappy party two years in a row. It killed it for me for a while, and not having any reason to.

The year before that I went as Cartman from the episode when he takes that weight gain supplement. I even went a dyed my own tank top pink (which was surprisingly hard to find) and wrote "BEEFCAKE" on it my self.

Some of my other personal favorites:

and one year I don't remember what I started out as, but it was sooo hot here in Texas I stripped down to just a pair of shorts and glow-in-the-dark face paint. I was now "the dead Beach Boy"

What do vegetarian vampires eat?