ComicBase 14: Finally, I can throw away my notebooks

It’s been a few years since I experimented with software for managing comics collections, and if ComicBase 14 is any indication, they have become astonishingly sophisticated – and possibly indispensable.

As background, let me say that I’ve always had some sort of archival system so that I could find various comics. With more than 150 longboxes in the Comics Cave – not to mention more than a dozen bookshelves – having a system for finding individual books is a necessity. And since I’m always on deadline, finding individual books quickly is a priority. All of this has given rise to Captain Comics Rule No. 1: “If you can’t find it, you don’t own it.”

And to tell you the truth, the system I’ve used since the 1970s – loose-leaf notebooks describing comics and their location – has served me well. I have bragged over the years that I could find most books in the Comics Cave in three minutes or less, not only because it was true, but because it annoyed computer geeks that my plain old paper-and-pencil system was still superior to their electronics. (Of course, I usually avoided mentioning that if I couldn’t find a given book in those three minutes, I would never find it at all. Akin to Edgar Allen Poe’s purloined letter, the easiest way to lose a comic book is to mix it with 60,000 other comic books.)

So although I dabbled with electronic filing systems and various spreadsheets in days gone by, I saw them as a novelty. My notebook system still worked better, and besides, it would take a system a quantum level better than the notebooks to induce me to do data-entry for 60,000 comics!

So imagine my shock that ComicBase 14 by Human Computing is just such a system. It’s amazing how this thing has anticipated my every need or want. 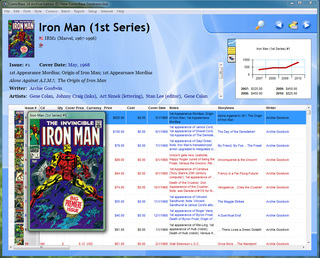 First, let me say that it’s the most comprehensive listing of American comic books I’ve ever seen. It easily eclipses the increasingly irrelevant Overstreet Comic Book Price Guide, long the Bible of comics buying and selling. It’s on a par with the Standard Catalog of Comic Books, with whom they are partnered (and which is produced by Comics Buyer’s Guide, for whom I am a Contributing Editor). But it’s superior in that it can update electronically with the latest releases. (With a print edition, of course, you have to wait for the new edition, and pay for it all over again.)

And not only does it have the most books (450,000 of them), it has the most information about those books – date of publication, plot summaries, guest stars, creators, even those hard-to-find circulation numbers that are so important to researchers like myself. And you can search for books by those categories, so if I wanted to, say, find everything Stan Lee ever wrote, I could do so with a simple command. It can do everything Microsoft Excel can do, but it's modified especially for comics collections, and the Sigma commands are in plain English.

Plus, it connects to the Internet to continually update back-issue prices as they average nationally. I have not the slightest idea how they aggregate all that information, so I am pretty impressed.

And it’s flexible. It has customizable fields, which is where my notebooks become superfluous. I have named Custom Field No. 1 “Location,” and it is there I list the box number for each book. And since it’s electronic, I can change huge amounts of information with a few key strokes. If, for example, X-Force outgrows the box it shares with X-Factor, I can move those books to a new box and change “Location” in ComicBase with a couple of clicks. Those kinds of changes were pretty labor-intensive with my notebook system.

Plus, there are tools like “Find & Replace,” “Mass Change” and so forth. Great googly moogly, that’s going to save me a lot of erasers!

ComicBase comes in various forms. I have the “Archive” edition, which includes copies of most comic-book covers, plus movie trailers, TV pilots and other audio-visual toys. I could spend all day on this thing!

As I implied earlier, I can give no greater recommendation for ComicBase 14 than that I am willing to invest the time to input data on 60,000 comic books. I’m convinced that it will prove to be time well spent in the years to come.

ComicBase 14 varies in price from $49.95 for the basic “Express” program to $399 for “Dual-Layer Blu-ray Disc,” with all the bells and whistles. It’s available online at www.comicbase.com.

Comment by K J Fike on June 8, 2010 at 1:23pm
Dagwan: Regarding Comic Base. If you've been using version 8, you are in the archaic version now. You really need to check out version 14 and soon Version 15 is due to come out late this year. I have been a customer since version 4, and now I go around the CNY area and even beyond as time permits, to demonstrate the feasibility of this program. I am a customer only of this program, BUT, I FEEL THIS STRONGLY about the program and it's advantages. You can also manage multiple collections on this program as well. If you have any questions, check out Comic Base.com or you can ask me too, I am on FaceBook (Kenneth Fike) and my email is KCFIKE@YAHOO.COM. Anyone in the San Diego area this July, go to the San Diego Comic Con, you'll see the wonderful folks from Comic Base there. Be sure to check them out. Wish I could get out there from the East, but, no able to right now. someday hopefully.

Comment by Horn'd One on May 17, 2010 at 5:30pm
DO NOT throw away any hardcopies that you have. These are your emergency back-ups. Put them in a plastic bag, seal them, then put them somewhere safe but accessible.

Comment by Dagwan on May 13, 2010 at 2:01pm
Back before I opened, I used ComicBase as well. Version 8 is still installed on my store PC, and I use it every so often to dig up an obscure piece of information. It's good stuff.

Check out the Secret Headquarters (my store) website! it's much better now!

Comment by Travis Herrick (Modular Mod) on May 13, 2010 at 12:15pm
As someone who has been extolling the greatness of ComicBase for a few years now: congrats on this Cap! It really is a nifty piece of software. Depending on how many different series you have crammed into a longbox and if you care about grading each issue (I sure as heck didn't) you can knock out a about a box an hour. Although, I did love the boxes that would only have 2 or 3 series in them and I was done in about 5 minutes.

Not only did it open my eyes to which issues I was missing in a series, but also how many extra copies of some issues I had. Apparently, I really wanted the first appearance of the Tornado Twins in Adventure Comics. 3 copies at last count.
The only sticker shock I've suffered is re-upping the subscription for the web updates.

Lee Houston, Junior replied to Steve W's discussion A Cover a Day
"Running late, again, but anyway... There will be at least as many collections and remembrance…"
24 minutes ago

ClarkKent_DC replied to Randy Jackson's discussion Ketchup/Catsup - Refrigerated or not
"If you want to live dangerously, and introduce the risk of growing bacteria and mold In that…"
6 hours ago

The Baron replied to Randy Jackson's discussion Ketchup/Catsup - Refrigerated or not
"Stored in a cabinet until you open it.  Once it's open, in the fridge."
6 hours ago

Randy Jackson replied to Randy Jackson's discussion How do the Wakandans mine Vibranium?
"Thanks. I guess that answers my question. "
7 hours ago

Richard Willis replied to Steve W's discussion A Cover a Day
"Another wrap-around. I don't like his Hal Jordan."
7 hours ago

Jeff of Earth-J replied to Steve W's discussion A Cover a Day
"Took down my previous post when I realized it was a dupe. Realized no posted this one yet."
7 hours ago

Philip Portelli replied to Steve W's discussion A Cover a Day
"Supergirl through the years!  (btw & IMO only, I don't think that Dick Giordano was a…"
10 hours ago