Jan. 26, 2010 -- Most people use the word “pandemonium” to describe a disorganized, noisy scene. But in Milton’s Paradise Lost, it’s the capital of Hell – which makes it an appropriate title for a graphic novel starring DC’s John Constantine.

Hellblazer: Pandemonium (DC/Vertigo, $24.99) is written by Jamie Delano, who guided the trickster mage through the early run of his title Hellblazer, now Vertigo’s flagship title. Although Constantine first appeared in Alan Moore’s Swamp Thing, Delano deserves much of the credit for Constantine’s development and enduring personality – snarky, blue collar, guilt-ridden, cocky and clever to a fault. Since Delano is himself English, Constantine’s dialogue rings consistently true, even if many of the slang terms are befuddling or obscure to American ears. 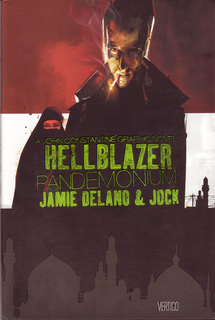 As to Pandemonium, the premise is that the U.S. Army captures something in the killing fields of Iraq that they’re unprepared for – as it’s not of this world, even though it looks like a man. Barely able to constrain the thing, unable to get near it without going insane, the Army impresses Constantine into service to figure out what it is, what it wants and, possibly, to kill it – if it can be killed. That leads to Pandemonium for real, and the world’s weirdest poker game, about which I’ll say little more.

Except this: It’s the Mesopotamian version of Hell, not the Christian one. And that’s an unexpected ramification of the U.S. invasion of Iraq – writers of American fiction have tapped into the rich vein of ancient Middle Eastern mythology. The recent Cairo: A Graphic Novel involves djinn and the under-Nile, DC/Vertigo’s Fables utilizes Alladin and Ali Baba, Fables: 1001 Nights of Snowfall re-worked the story of Scheherazade, and so forth. Pandemonium acquaints us with Erishkegal (and her temple at Kutha), Ishtar and Nergal from Mesopotamian mythology, as well as their Hell’s earthly avatar, Tel-Ibrahim. That’s a lot of fun stuff to learn in the course of a horror story.

Which is what Pandemonium technically is. But really, it’s simply a John Constantine story, told by an expert. And that’s not at all horrible, old son. * Dark Horse has released the fifth volume of the Creepy Archives ($49.95) and, unfortunately, these stories from 1968-69 reveal a franchise in decline.

When Creepy (and later Eerie) burst on the scene in the early 1960s, it was for all intents and purposes the second coming of the EC Comics horror line. (EC is the legendary early ‘50s comics company which was essentially driven out of business by the 1954 Comics Code.) Many of EC’s finest artists – such as Wally Wood, Al Williamson and Johnny Craig – picked up in Creepy right where they left off 10 years earlier. Another EC veteran, Frank Frazetta, did many of the early covers. Writer/editor Archie Goodwin successfully channeled the plots, rhythm and dialogue of EC’s writer/editor, Al Feldstein. And stellar newcomers like Steve Ditko and Gray Morrow fit right in.

But with this volume, Goodwin and the EC artists are mostly gone. Bill Parente takes up the slack as editor and as the most prolific writer, and while he’s OK, he’s no Goodwin. (And I don’t know if it’s his fault, but the copy editing exhibits a severe decline, with misspelled words on nearly every page.) On the art side, Frazetta’s gone and the covers grow increasingly amateurish. Inside, newcomers Tom Sutton and Ernie Colon are certainly welcome, but there’s a sharp drop-off in quality on any story they don’t do. 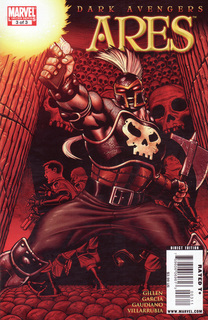 I never collected Creepy and Eerie, so I don’t know if this decline will reverse itself in later volumes. But I’ll be there to see, because these magazines are important bits of comics history that I’m finally experiencing first-hand.

* I didn’t expect much of Dark Avengers: Ares #1-3, a miniseries starring Marvel’s version of the Greek god of war, so perhaps low expectations are why I was pleasantly surprised. And it was good enough that even my wife, who loves history but hates Marvels (which she refers to as “fight books”) picked it up and devoured it.

Ares is a plausible and insightful look at how the god of war would behave in modern times. And you don’t need to know happening in other Marvel books, or Ares’s history, to enjoy it.

I don’t know much about writer Kieron Gillen, but his Ares is a welcome rarity: a standalone Marvel series that tells a complete and compelling story.

Comment by The Baron on January 27, 2010 at 4:07pm
It's funny - I first saw Constantine in Crisis On Infinite Earths. As I recall, he appeared for about a panel and said, in what seemed like a fairly stilted way, that he had plans for the Swamp Thing. I don't think I saw him in anything again for about 25 years when I saw him in a Zatanna story as her sleazy ex-boyfriend.

Comment by Figserello on January 27, 2010 at 7:15pm
Comment by The Baron 2 hours ago It's funny - I first saw Constantine in Crisis On Infinite Earths. As I recall, he appeared for about a panel and said, in what seemed like a fairly stilted way, that he had plans for the Swamp Thing. I don't think I saw him in anything again for about 25 years when I saw him in a Zatanna story as her sleazy ex-boyfriend.

Sounds like you've never read Moore's Swamp Thing. Them is some fine funnybooks. You should dive in sometime.

Come to think of it, I envy anyone who hasn't read them yet.

Comment by Mark Sullivan (Vertiginous Mod) on January 28, 2010 at 10:14am
Swamp Thing gets my highest recommendation as well. Constantine is pretty much a bit player in it--it took Delano's run on Hellblazer to really flesh the character out, as Cap said--but it's great comics.

Comment by Jeff of Earth-J on January 28, 2010 at 5:31pm
I haven't read Creepy Vol. 5 yet, but I feel as if I have because Tracy gave me the play-by-play the whole way through (including the letters pages). From what she tells me, readers of the day expressed the same complaints you (and Tracy) did, plus Tracy commented on the the increasing percentage of material reprinted from earlier issues. Mainly she just lamented the fact that Warren is not EC. She's ready for Gladstone's archival reprint series to start up again.

Comment by Captain Comics on January 28, 2010 at 5:47pm
Supposedly the Archives are omitting previously published stories, but there were at least two in this volume that I'd read before. One was introduced by Uncle Eerie, so maybe they neglected to check the companion Archives for repeats.

Or it could just be lousy editing. As I mentioned, the copy editing is atrocious. For example, one story refers to "Argameddon." For heaven's sake, Mr. Editor, how do you mess up a word that badly? If you don't know -- and you clearly don't -- look it up!

Anyway, there were a few stories by some of the old hands -- Goodwin and Ditko appear a couple times each, for example. But they were probably reprints I just didn't recognize.

Comment by Jeff of Earth-J on January 29, 2010 at 8:25am
I, too, thought they were supposed to be omitting the reprints, but evidently not if they're by "name" creators such as Goodwin and Ditko. Tracy has those pegged as reprints from previous volumes, and her memory is sharper than mine! (For some reason she refers to Ditko as "Stevie Ditko" and I don't know why.)

The reason I haven't read this Creepy collection yet is because I'm in the middle of volume "E" (i.e., "4") of The Complete E.C. Segar Popeye. "Argameddon" is exactly the way the well-know sailor man would pronounce it!